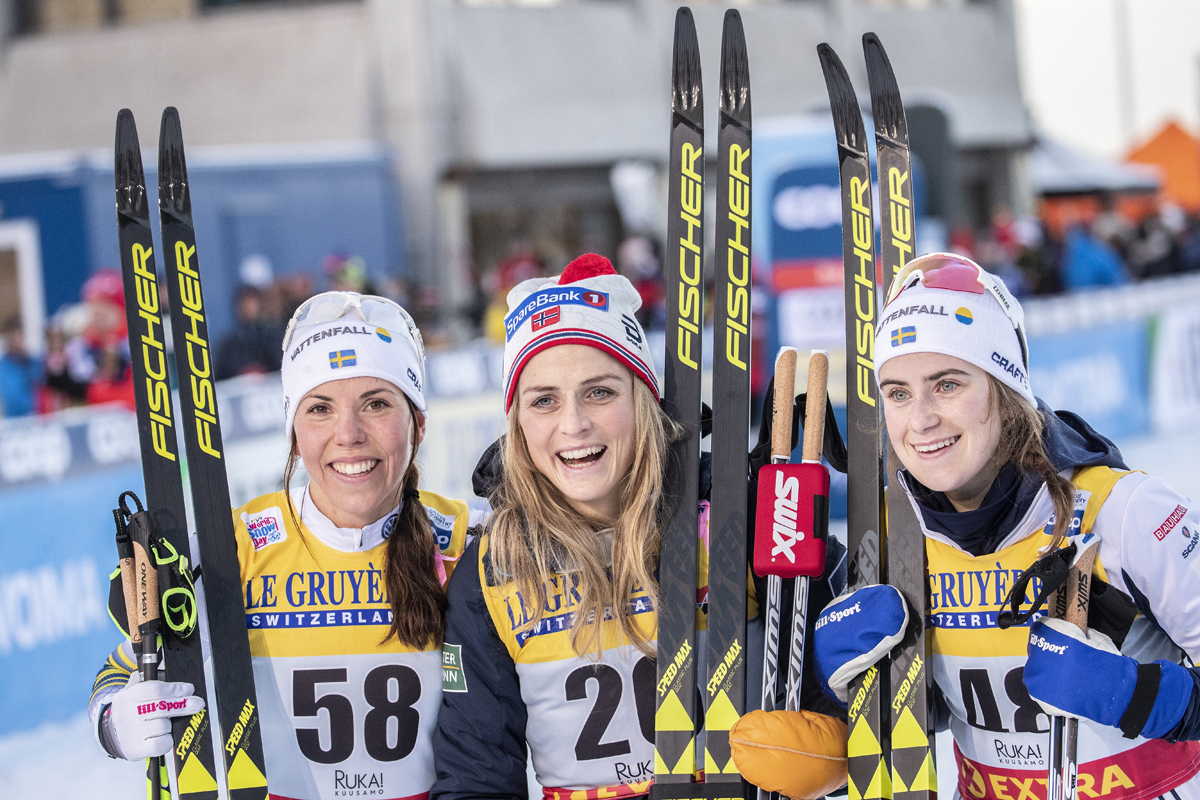 The most important story within the story was the fight within Sunday’s aerobic fight during the women’s World Cup 10-kilometer classic in Kuusamo, Finland.

Each of the seventy starters in the women’s field wore a pink ribbon acknowledging the global fight against breast cancer and their friend, retired U.S. athlete Kikkan Randall.

The aerobic fight on the 3.3 k loop in Kuusamo wasn’t well defined until Norway’s Therese Johaug skied through the stadium to begin her second lap. From then on, in her first World Cup race after serving an 18-month ban for failing a drug test, Johaug marked the fastest times at every remaining checkpoint. Her 5.7 second lead at 3.3 k became a 22.5-second margin at the finish where she won in a time of 28:02.5 minutes. 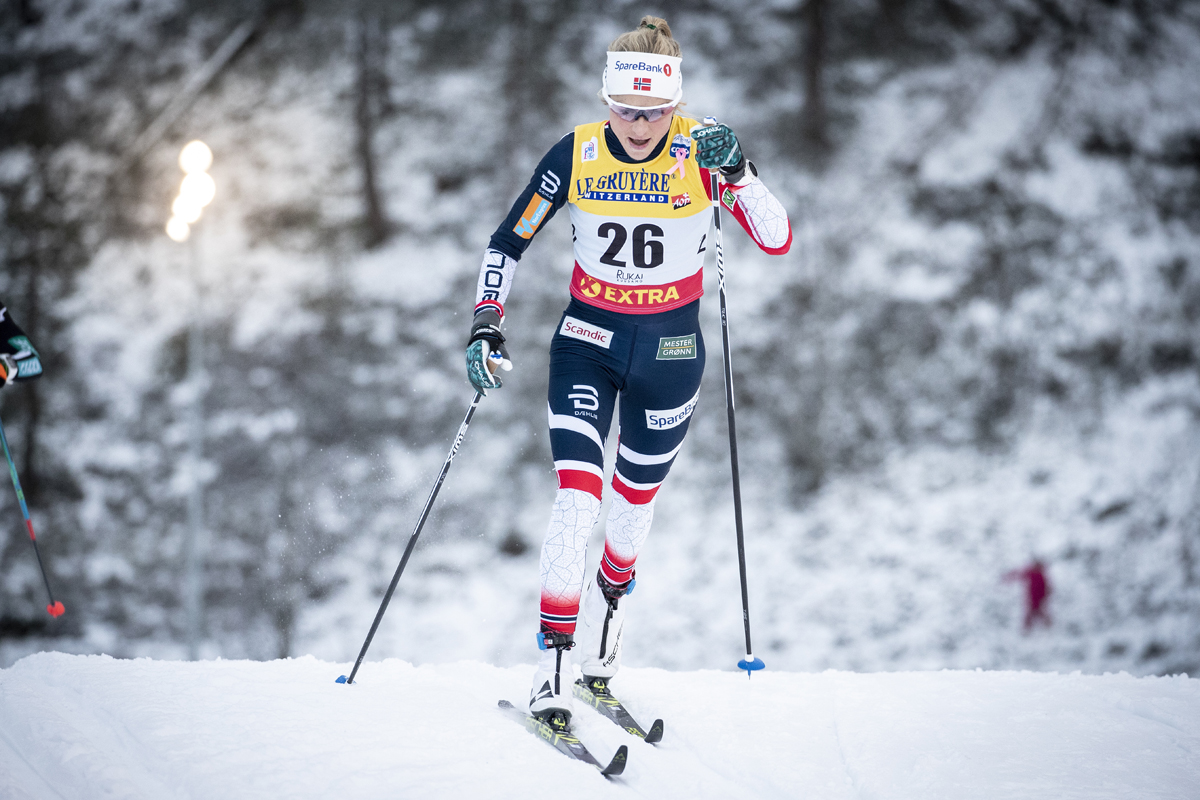 Norway’s Therese Johaug back to being a winning Johaug in the 2018 10 k classic in Kuusamo, Finland. (Photo: Fischer/Nordic Focus)

“It is a day I’ve been looking forward to for the last two years, that I [can] come back and finally would be allowed to compete again, which is what I like the best,” Johaug told Norwegian broadcaster NRK according to a translation. “To get to start with a win, it’s big. I have trained and trained for two years and tried to motivate myself to come back and maybe one day stand at the top of the podium [again] and [to achieve] it today on the first try, it’s big.”

Before her suspension, the thirty-year-old Johaug last won on the World Cup in 2016. In that season-ending 10 k classic pursuit in Canmore, Canada, Johaug won the day and secured her second overall World Cup title. That year, her last full season on the World Cup, she won 17 races, as she podiumed a total of 28 times.

“We have huge aspirations for the season and it is easy to misplace them and start expecting things to happen this early in the season,” U.S. women’s head coach, Matt Whitcomb told FasterSkier on the phone. “Although we do want to win every time we race, wanting and expecting are really two different things. We have realistic expectations this time of year.”

With the ongoing success of the U.S. women’s team, where podiums have been common, a slow start is defined differently than it might have been in the recent past. Last year, for example, during the 2017 World Cup opening Ruka Triple, Bjornsen and Sophie Caldwell placed second and eighth respectively in the classic sprint. In the 10 k classic, Jessie Diggins placed 10th after not qualifying in the sprint (she placed 34th), while Ida Sargent was 22nd, Bjornsen 23rd. Bjornsen finished the three-race series in 10th overall, Diggins 12th. Randall posted a 25th overall for that weekend, Brennan, then part of the USST, finished 28th.

Collectively, the 2017 opening weekend was solid for many. By that benchmark, the same can be said of 2018’s first World Cup go for the U.S. women.

“I think if you look back historically, we have had success here, but it has been spotty,” Whitcomb added. “And as a team, we take a few weeks to get going and we can expect much bigger things in Davos, but hopefully increasing in success each weekend.” 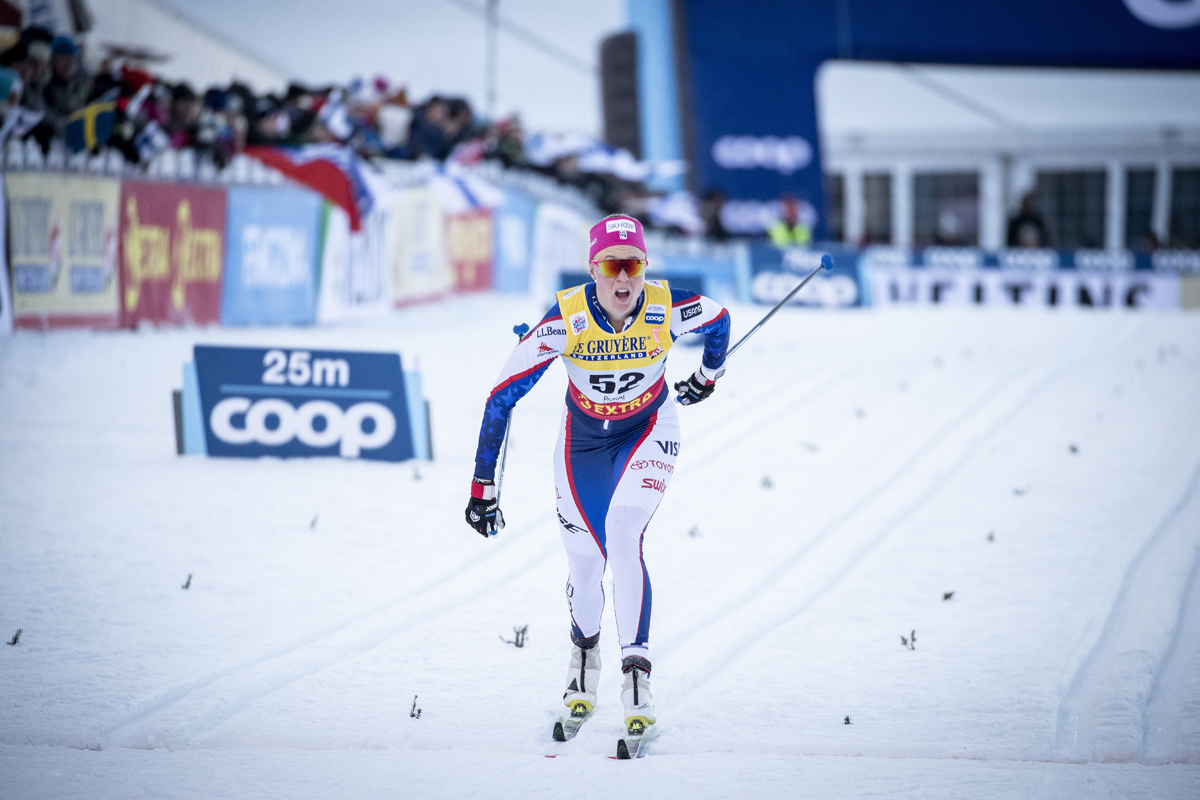 (Sadie Bjornsen for the U.S. toes into eight place in the 2018 women’s 10 k classic in Kuusamo, Finland. (Photo: Fischer/Nordic Focus)

The twenty-nine-year-old Bjornsen comes off an 11th in Saturday’s sprint. In her longer effort on Sunday, Bjornsen capitalized on the always charging Diggins.

“I went out of the start just 15 seconds after Jessie was coming through [on her first lap],” Bjornsen told FasterSkier. “I think that kind of started me on a good note because I just went on the chase to try to catch her.”

Bjornsen did chase down her ally and with it motivation to push harder.

“When I did catch her, I actually helped her on the biggest climb, then I was like ‘man, I must be feeling great,’” Bjornsen said in a call. “Then I kind of just took off from there. I think sometimes for me personally the most important thing is to get myself to have a fast first lap because it kinda sets the mood for the rest of the race. … I feel like that was maybe the thing that kind of set a good tone for a good race today, was just having that hot start.”

Over the years, Bjornsen has defined herself as a formidable classic skier on the World Cup. Despite that reality, she explained she modified her striding technique to remain “low” when she becomes fatigued in the race.

“When I get really tired in classic skiing I tend to stand straight up, so this summer I’ve been really working on trying to stay low the whole time while I’m classic skiing,” Bjornsen added. “That is something that I’ve felt better with so far, and hopefully I’ll be able to maintain it throughout the season.”

Closing out another more-than-solid opening weekend for Bjornsen may also have something to do with ski selection. Bjornsen spent time refining her ski fleet during the off-season.

“I have struggled with classic skiing in the last couple of years because I have amazing races, and then I have races where I just can’t kick my skis at all or I can’t glide,” Bjornsen said. “I have been trying to figure out what has been going on. One of them has been, I spent a ton of time this summer and actually the reason I was in Beitostølen [recently] was  I’m doing a bunch of testing with skis because I think skis were kind of standing in my way for the last couple of years. Either, it’s been amazing or it’s like really off. So it’s been really cool to actually try to work on it and see that some of these things that I have been struggling with are not really me, it’s like something that can be fixed which it’s really cool.”

When it comes to fixes, Diggins, according to last year’s template, is right where she needs to be. The sky has not fallen.

“I think it was really encouraging to have a race right where I was last year,” Diggins said in a call. “This weekend is basically a carbon copy of last year for me. And I think, and obviously, last season turned out really well, so I am fine with where I am right now.”

Diggins confirmed she was carrying a big load of training into the opening weekend. Her primary early season objective remains the Tour de Ski.

After Diggins and Randall scored their Gold medals in PyeongChang, their lives changed. Diggins remains a sought out motivational speaker, and product endorser. Her obligations as it relates to commitments outside her immediate training and resting have ballooned. She helped secure a World Cup for Minnesota and continues to advocate on behalf of climate change concerns and The Emily Program — an advocacy group focused on eating disorders.

“This spring and summer I definitely went through a learning curve,” Diggins said of the requirement to balance life outside of skiing. “I gave all of my time towards things that I care about, like making the World Cup come to Minnesota and it was absolutely worth it.”

While remaining positive about her ability to bring change, Diggins did note her growth has involved learning to respectfully deny some media requests. “We are not robots. We need to have a life outside of training and resting as well,” Diggins said. “I feel like this year was a good adjustment period for me and I feel like I learned a lot. And next year I am going to keep challenging myself to say ‘no’ more often. I think what I did this year is only sustainable for one year.”

By the time the Olympics roll around in February last year, Brennan felt sapped. She was not renominated to the USST following the season but continued her training with Alaska Pacific University. Diagnosed with mono, Brennan rested and recovered.

Eventually, she re-tested her race form this past June, by setting a record time in the 2018 Alaska Run for Women.

“Everything seems fine now,” Brennan said on the phone about her health. “So I crossed my fingers it’s all in the past. It definitely makes you nervous every time you feel something, like ‘Oh God, is it another virus that never goes away?’ But so far so good. So I’m trying to just not think about it too much, and be thankful that I’m healthy now.”

In the points with room to spare, Brennan’s top-25 performance rings a positive note. Her race performance didn’t buckle in her World Cup return. Her pacing and splits were consistent. With 2.3 k remaining during Sunday’s race, Brennan sat in 19th place in a tightly stacked field.

“I know definitely in the past I’ve gone out way too hard, so I tried to have a controlled effort today, and I think I did a good job of that,” Brennan said. “I still think I have some progress to make. Like in that last k or two, you know it’s hard, you always forget how tight the World Cup is. But literally, every second is a place often. So I’m kind of back in that mindset where you’re fighting for literally every second, I feel like I have some work to do there, in the last 2 k.”

No other North American women were entered in the race.

Racing on the World Cup moves to Norway where a three-day series will begin in Lillehammer, Norway next Friday with a freestyle sprint.