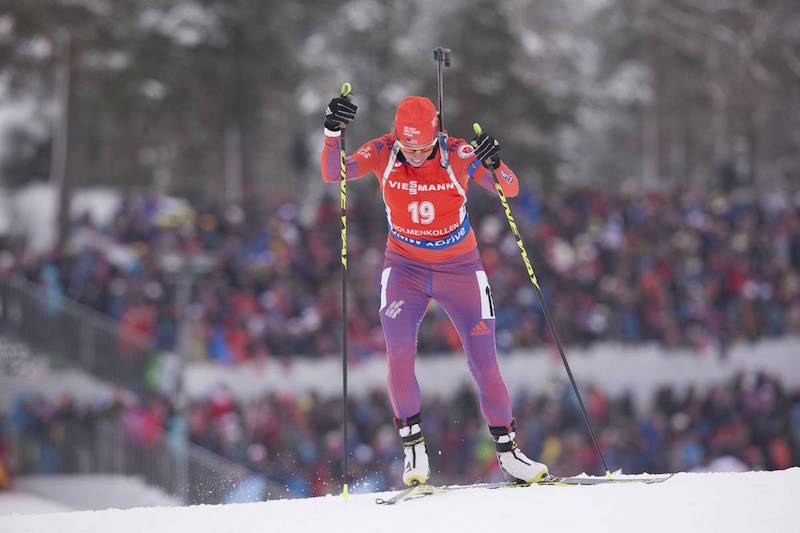 Susan Dunklee was eighth in the first individual race of World Championships, despite a missed shot in standing - and the American wants more. "That Presque Isle podium really got me excited again- motivated, and confident, and very hungry," she said. 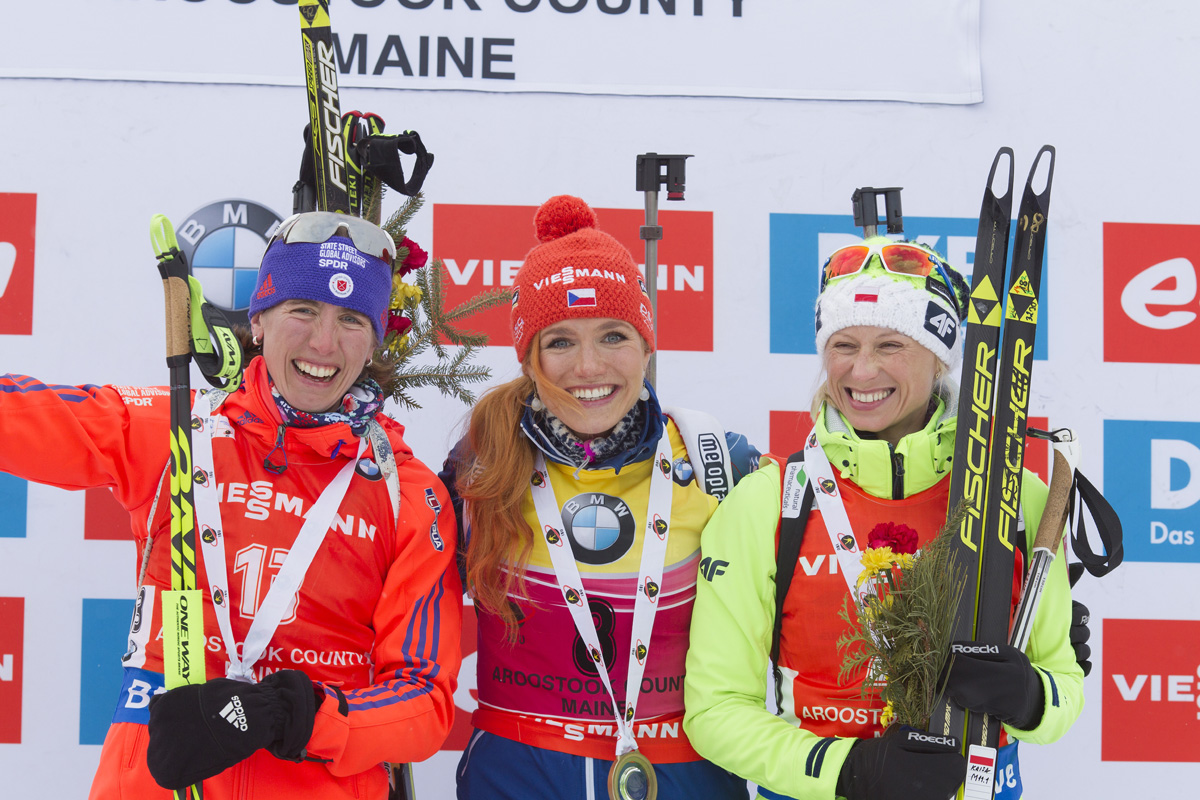 Susan Dunklee had been looking forward to racing at a home World Cup for the better part of the last five years, and then some. She found her "happy" place on Thursday to achieve a historic career-best: second place in the women's IBU World Cup sprint. "In order to have my best performances in biathlon or anything in life … I really have to find what I love about it,” she said. 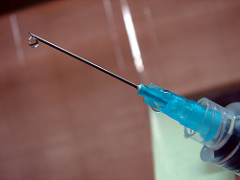 The international federations for cross-country skiing and biathlon tout that they have done more against Russian doping than the IAAF - for instance, re-testing old samples with new methods, or sanctioning the Russian ski federation. But WADA's report still scared them, and they want more information. 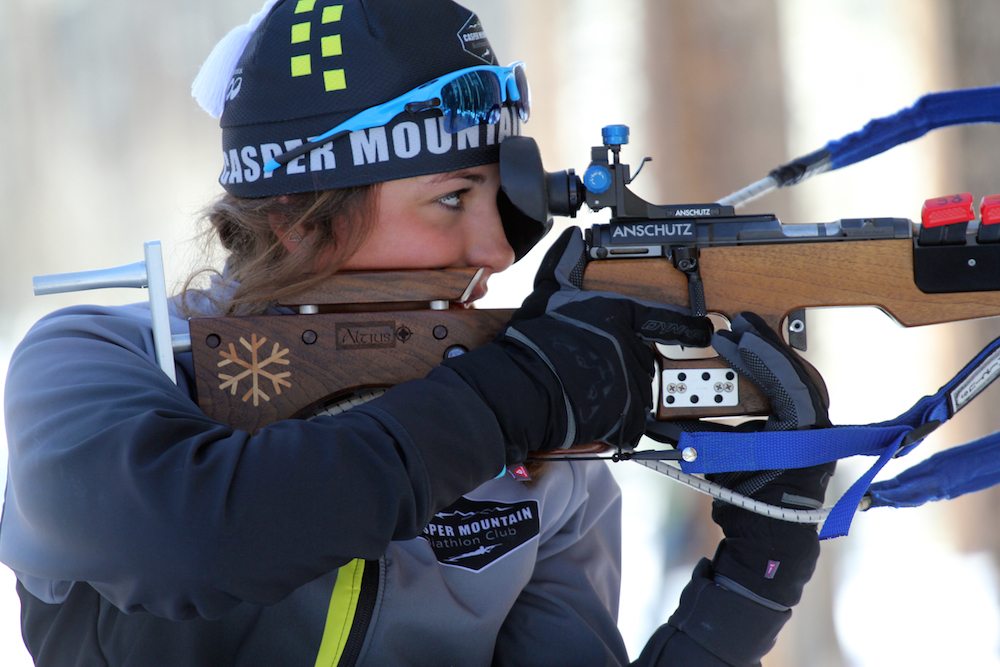 The Casper Mountain Biathlon Club has broken ground on an ambitious plan for a 30-point biathlon range and 10 kilometers of new homologated trails -- at nearly 8,000 feet above sea level -- for both adaptive and able-bodied skiers. 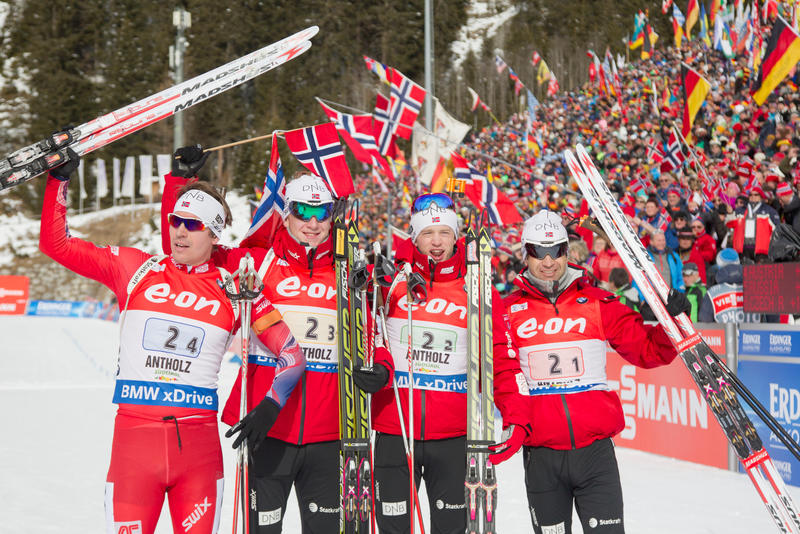 The Norwegian men aren't psyched about traveling to North America for World Cups next season, saying that World Championships afterwards are more important. Max Cobb, the head of the IBU's Technical Committee, points out that there are two and a half weeks of free training time before World Champs. For the Norwegians, that might not be enough. 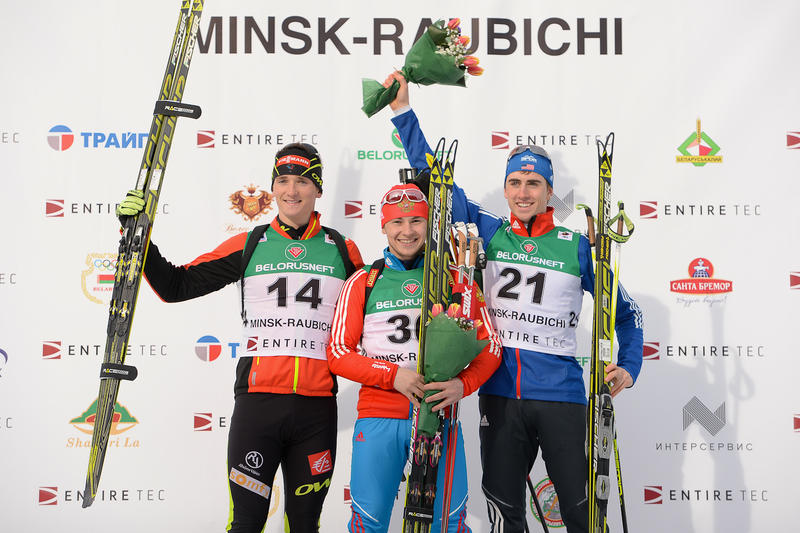 Conway, New Hampshire, might not be surprised that yet again, Sean Doherty is bringing home a medal in his luggage from a major international competition. But after two years of winning at the youth level, making the podium as a junior is still a big accomplishment. Doherty starts Sunday's pursuit ten seconds out of first place. 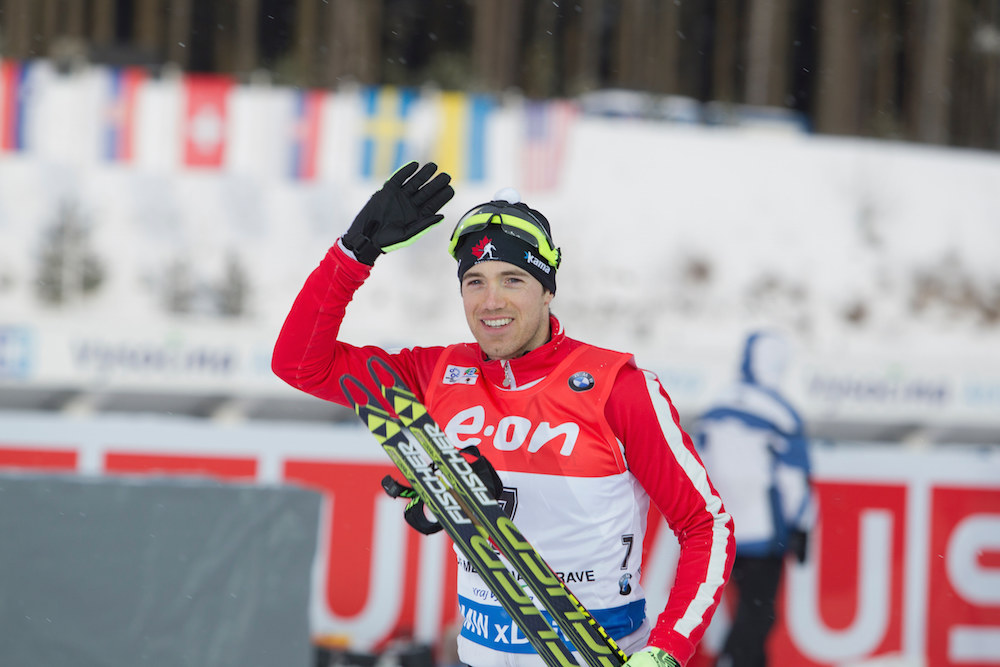 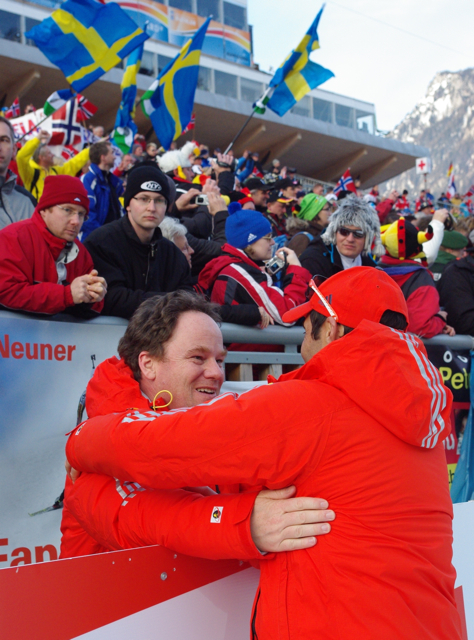 U.S. Biathlon's Max Cobb also chaired the IBU Technical Committee for the past several years - and he just passed rule changes at the IBU Congress that include a system-wide qualification points system and added Wild Card entries to major events. "People voted in favor of a more fair, open, and sporting system – I was really gratified," Cobb said. 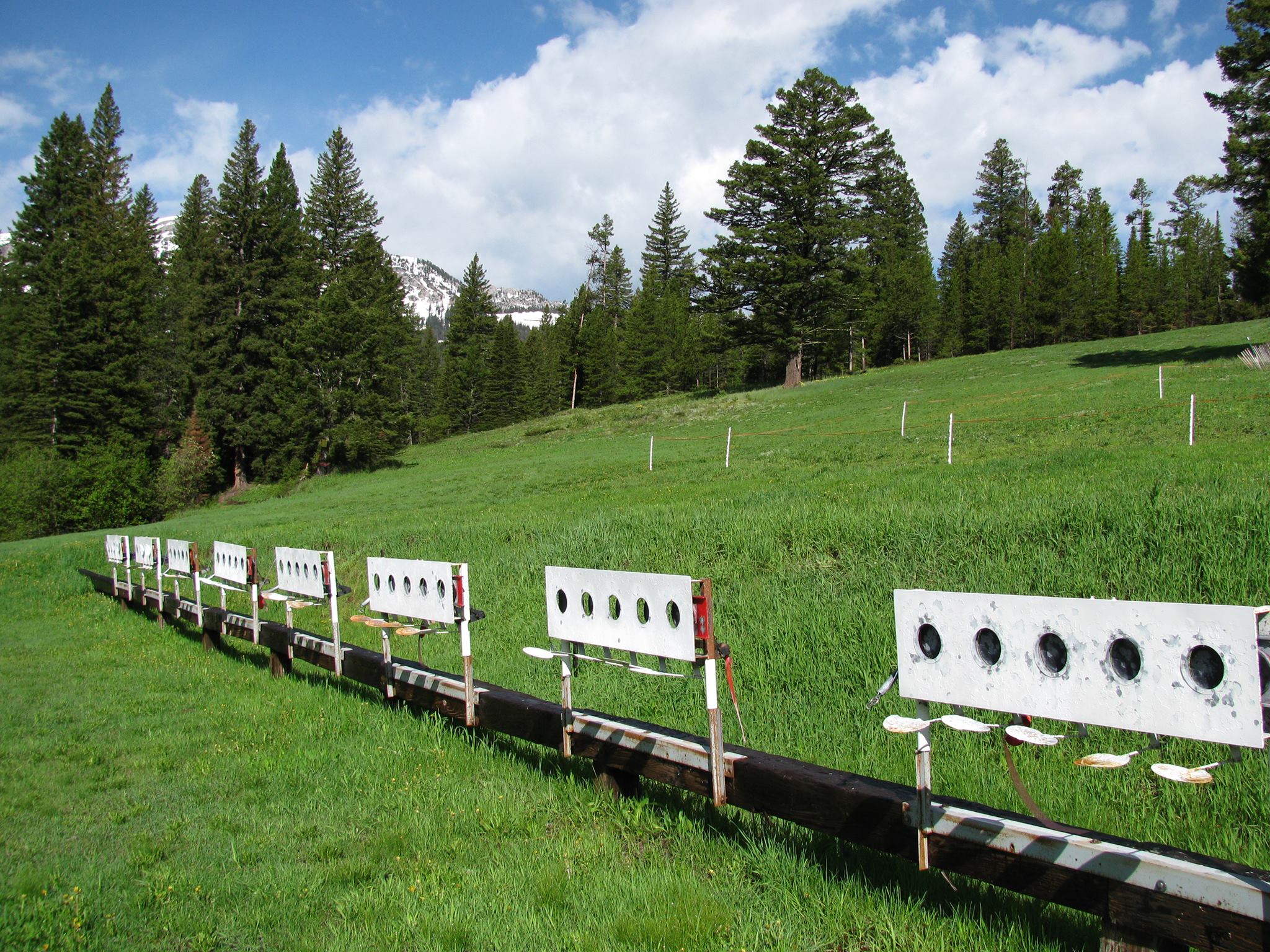 Biathlon in Bozeman was booming in the 1980s but in the last two decades, the sport has declined in the mountain town as cross country skiing popularity has grown. However, a group of community members is trying to bring biathlon back to Bozeman with the formation of the Bridger Biathlon Club, and they are off to a good start. 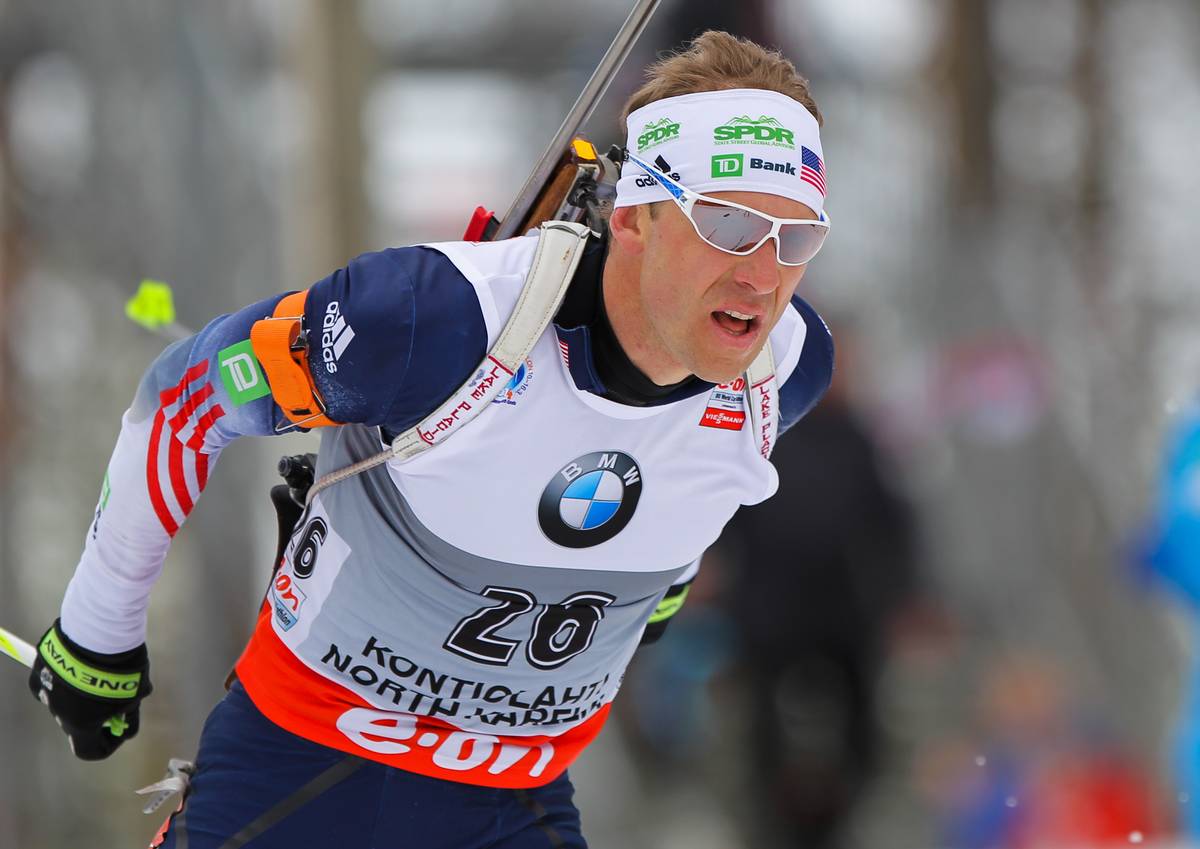 This spring, nordic organizations across the U.S. and Canada were hit hard by cuts from their Olympic funding partners. U.S. Biathlon Association President Max Cobb says his group wasn't one of them: USBA didn't get its full request, but it got enough. "It's a relief," he said. USBA also has the added benefit of a foundation to help with additional fundraising. 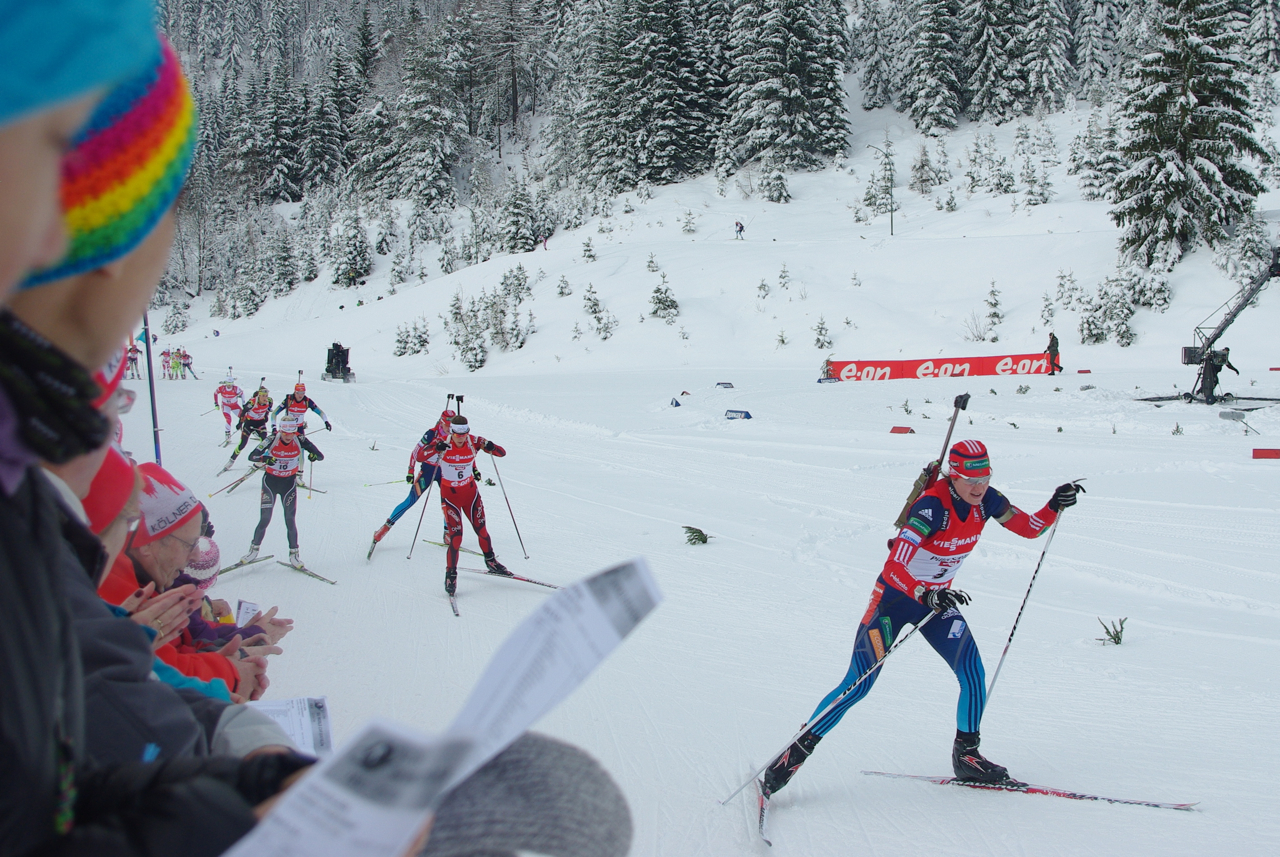 The International Biathlon Union's Executive board voted last month to discontinue its blood testing at the Olympic Games, meaning that the Athlete Biological Passport program will no longer be implemented there. The decision was taken without consulting the organization's Medical Committee, and the IBU has not offered an explanation to its members. 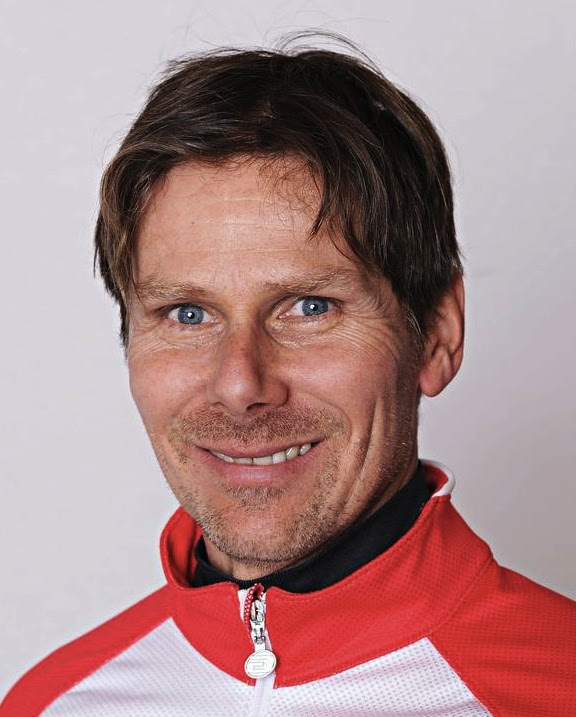 Paquet, the personal coach for Jean Philippe Le Guellec and whose contract was not renewed by Biathlon Canada, will move to oversee the American development and "X" teams as well as regional development efforts. "The new job is exactly what I was looking for," Paquet told FasterSkier. 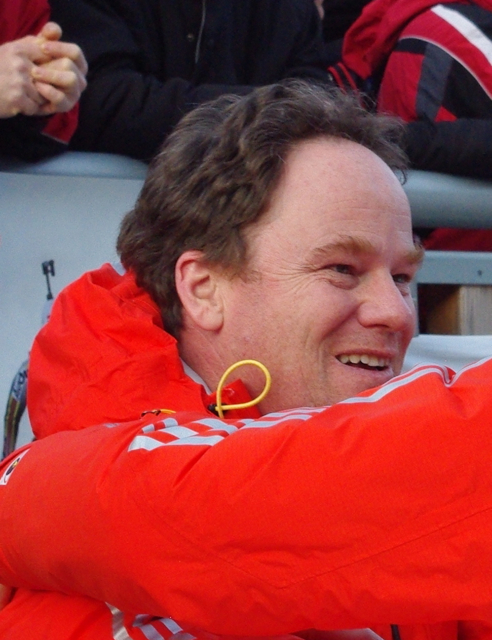 U.S. Biathlon CEO Max Cobb says that it took four or five years for his organization to get on its feet after splitting from modern pentathlon in 1980 -- but that whatever route U.S. Nordic Combined takes, the good news for them is that they have proven success and that direct fundraising tools have entered a whole new realm in the past few years. 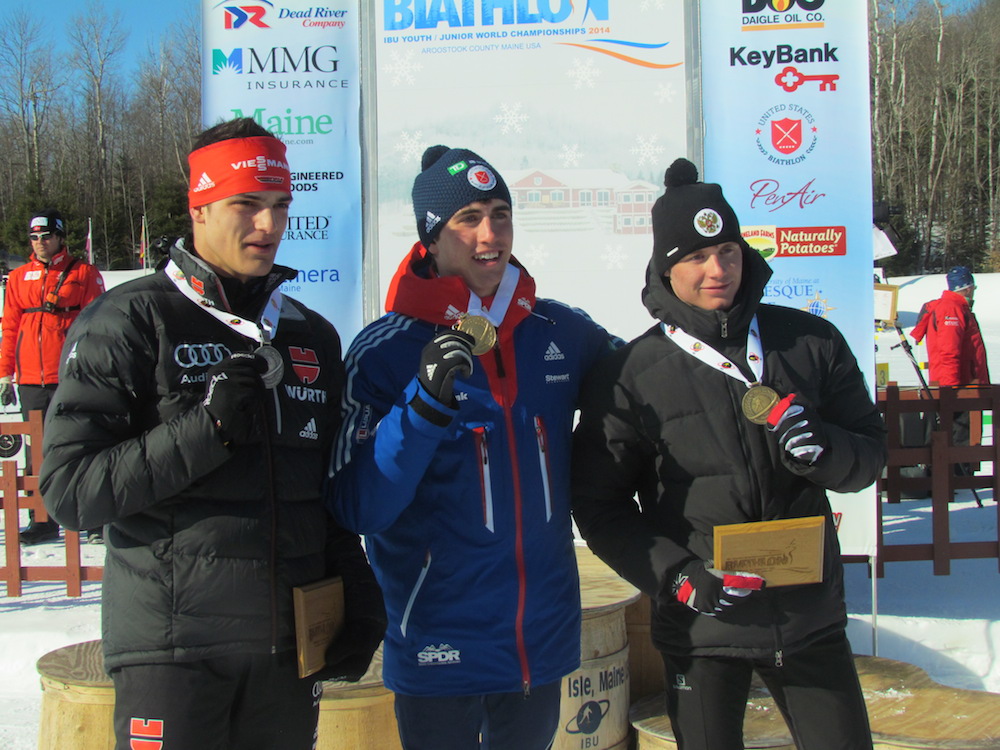 The U.S. Biathlon Association is focusing resources on the future: for the first time in years, there's a development team, a recruitment camp, coaches seminars and regional development efforts. Plus, High Performance Director Bernd Eisenbichler is now the Chief of Sport, and will also oversee development - that's "why I’m staying with U.S. biathlon," he said. 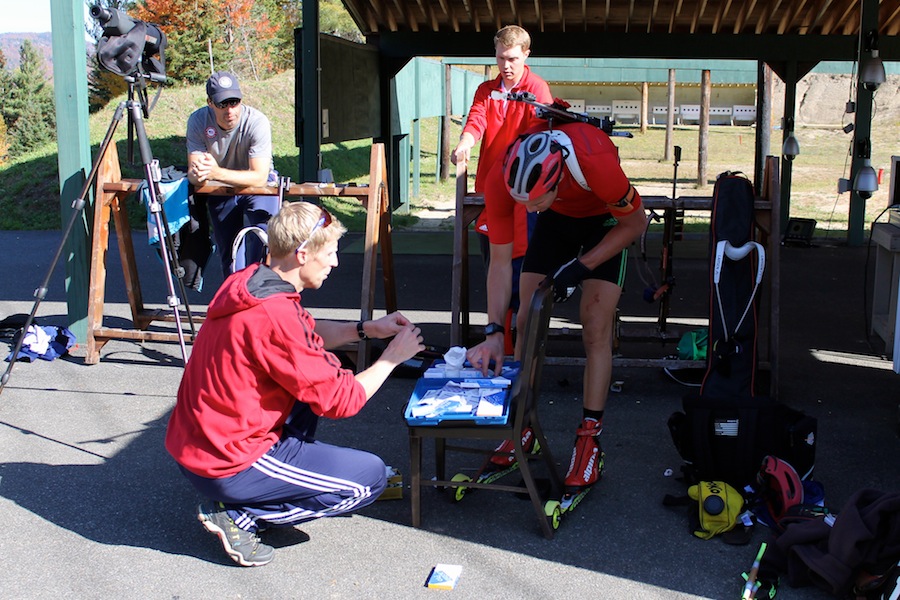 There could be such a thing as national-team walk-ons as a result of an upcoming US Biathlon tryout camp, a new format of its kind aimed at talented endurance athletes in the J1, OJ or collegiate age category. 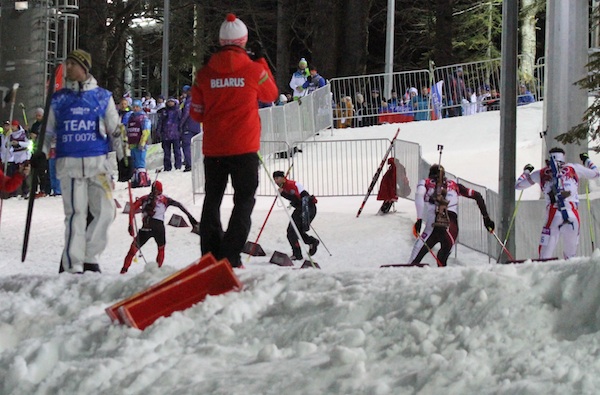 After athlete complaints at last year's World Cup, Sochi organizers removed a particularly dangerous downhill from the biathlon course. But with warm conditions and deep, rutted snow, the rest of the course became treacherous today, with at least four major crashes between the 59 racers. Freezing nights are not predicted until next week, suggesting that the cross country ski courses, too, may be in for some ugly conditions. 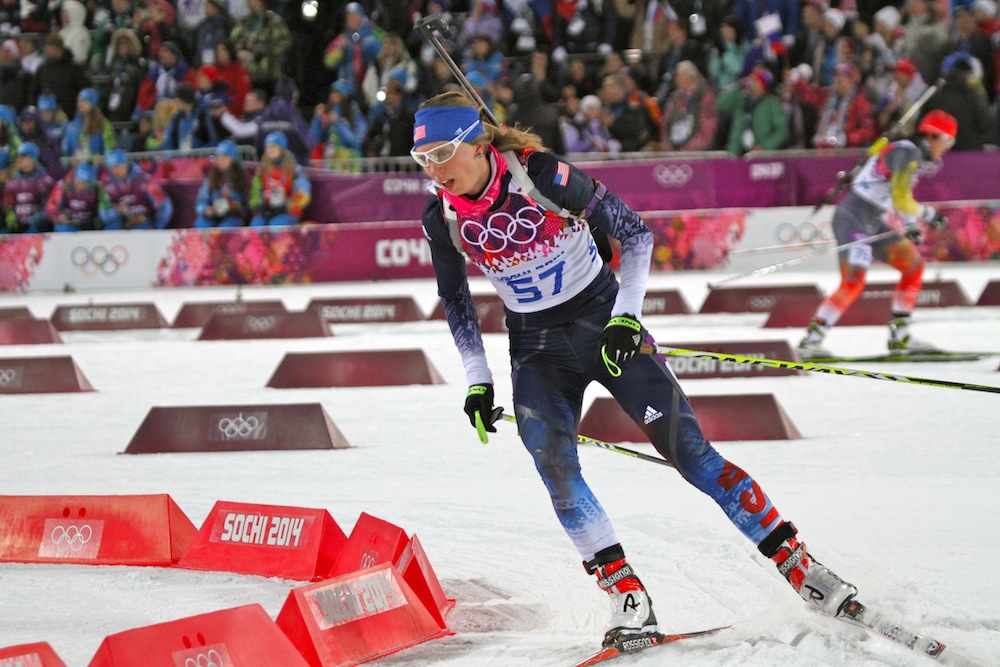 After Susan Dunklee turned in the best-ever U.S. women's performance in an Olympic sprint, Sara Studebaker clocked in at 44th and Annelies Cook in 53rd, while Hannah Dreissigacker just missed the cutoff for Tuesday's pursuit in 65th. "So actually getting there, it’s a huge feeling for me," Cook said of her first Olympic finish. 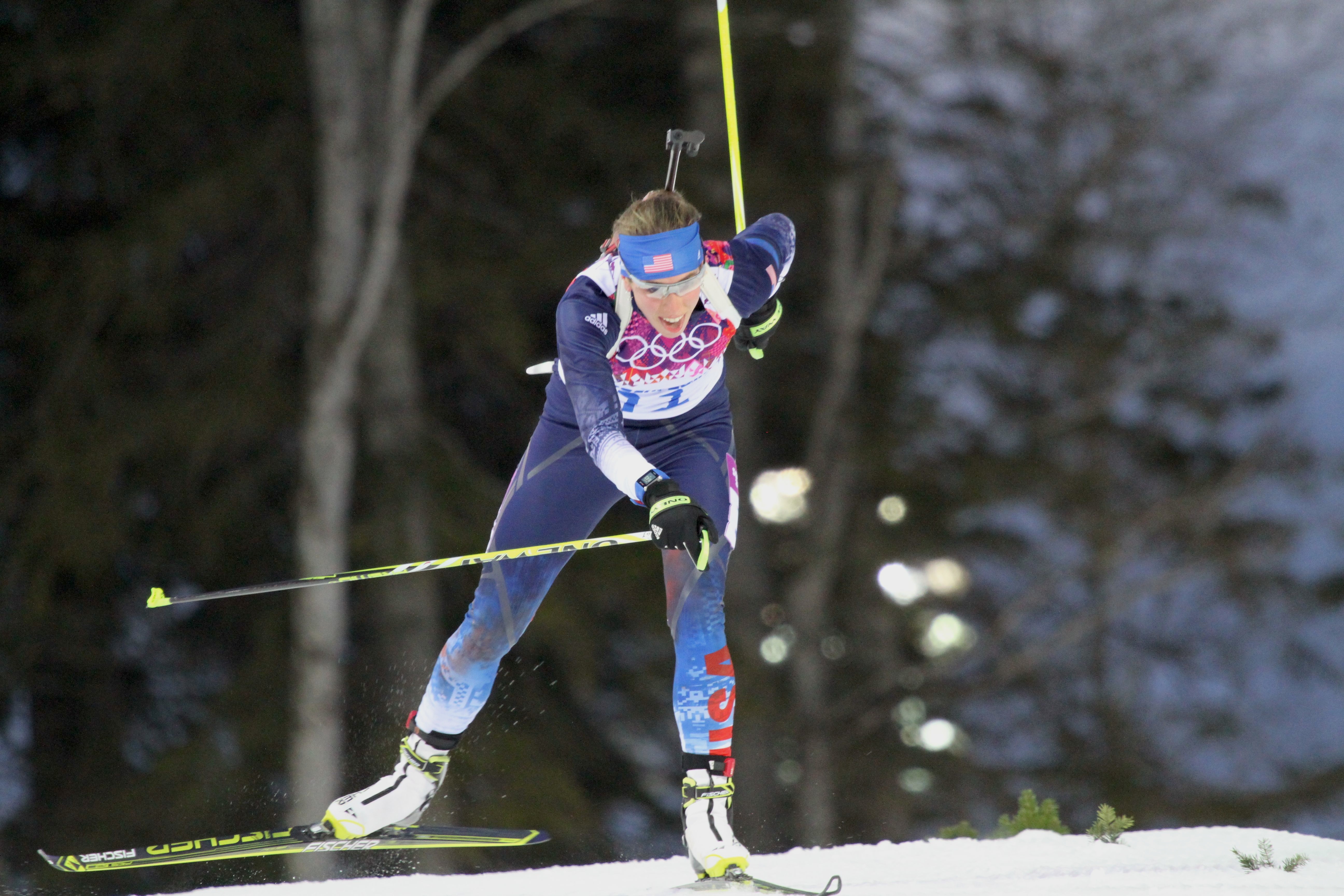 A single errant bullet forced Dunklee into a penalty lap and pushed her down to 14th place on the day — tantalizingly close to the podium, but still good enough for the best-ever Olympic finish in a sprint race by an American woman, 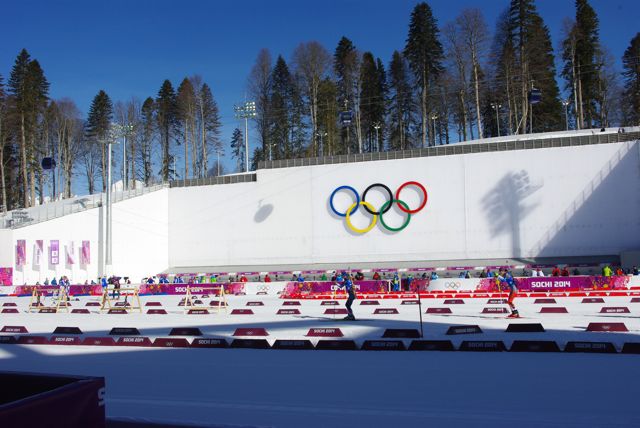 Canada's Rosanna Crawford says that some features of the Sochi course have stayed the same since the World Cup visited last year: the big climbs, the shooting range with an easy approach and huge retaining walls which cut the wind. But as Max Cobb explains, some changes have been made to the courses as well based in part on Organizing Committee layout errors. 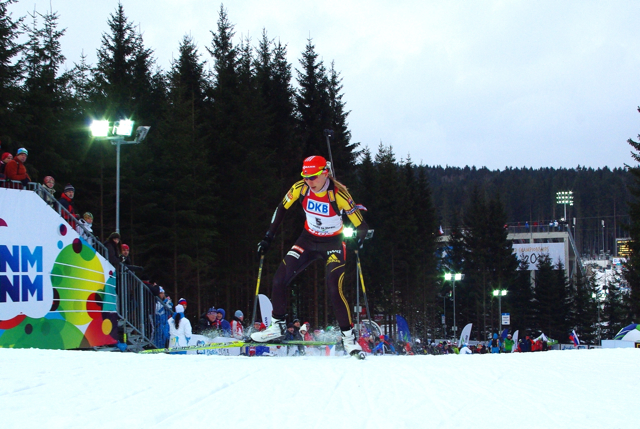 Some of Irina Starykh's competitors are defending her, saying the investigation is not yet complete; administrators and coaches from Scandinavia wonder how stupid you'd have to be to try doping in the leadup to the Olympics; a former IOC medical director believes Starykh's coach and team doctor are the last vestiges of the old Soviet doping system, and hopes they will be weeded out.