New York has finally received some snow and everyone has been making the most of it. Last weekend a couple of the Juniors headed north to Lake Placid. Without any time on snow except for a tour of the course on Saturday they had some exceptional results.

Alyssa Likly started the season off with a bang winning the J2’s girls race!!! Her brother Reed has moved up from the J2’s to join the big guns this year in the J1 age group. Reed had a great debut placing 4ht in the J1 category. Adam Swayze also had a great start to the season now in his second year as a J1 placing second in his age group and proving that all his hard work this summer is sure to pay off this winter. The winner of the J1 race was Charlie Bencze (NYSEF) this was also Charlie’s first race as a J1. On a side note both of the boys took care of business on a club level beating all of the big guns from Peru and putting the H.U.R.T on a couple of other local
NY Clubs 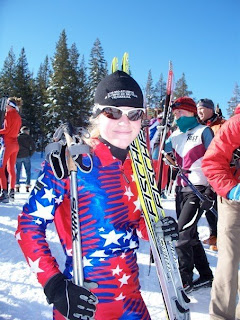 The senior team headed to Byrncliff on Saturday and Sunday. With lake effect snow hitting the Buffalo area hard on Thursday the best skiing around was found on the Piston Bully groomed trails. Often forgot about Byrncliff offers 5k of lit trails and about 20k of total trails and often has snow due to it’s close proximity to the lake effect snow bands of Lake Erie. If you live in the Rochester area you gotta make it out there. There ability to groom with a Piston Bully make for some of the best skiing in the state.
That’s it for now. I’m currently in Hartford airport waiting for my flight to Minneapolis. A preview of the weekends plans will follow!! Get out and enjoy the snow!!

Podium in Silver Star, BC