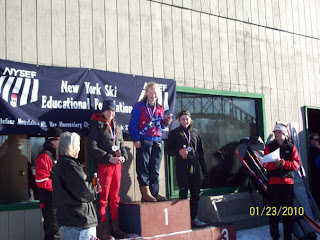 It was a big weekend of racing for the R.N.R gang as we made the trip north to the Olympic . The senior team set up base camp at the “JR” where we were joined by Amy, Stefan and Rob. We kicked off the weekend with the infamous coin game. I thought I was in prime position to secure one of the double beds as I won the preliminary round securing my position as the last one to throw in the money round, but as luck would have it the last two qualifiers came up big when the pressure was on and ended up with the two bigger beds!! Marty and I were relegated to the two single beds for the weekend while Steve and got to enjoy the luxury that the queen beds provided!

The morning of the Skate race we should have known we were in for it as we pulled out of the driveway headed for the venue and got a classic welcome from one of the locals. Marty may have taken his time as he pulled out of the driveway but we had plenty of time to get in to our lane and get on our way, apparently the guy in the pickup coming the other way did not think so and made sure to roll down the window and get his hand out to throw us the bird!!

As we arrived at the venue the A1 cluster F%$#@ was already in full swing! The cold temps overnight had everyone running around switching wax and trying to find more clothes. By the time the first starter was off the sun was out and it was a picture perfect day. The juniors had a big day as they looked to lock of there position on this years JO team. Reed led the way for the boy’s while Alyssa and Amy threw it down in the girl’s races! The senior team did not ski up to expectation and it was decided that to make up for it we would ski the first ½ of the Loppet course in preparation for the upcoming race. Since we really had no idea where we were headed we recruited Jacked Up to give us a tour of his stomping ground. It seemed like we went up a lot of big hills so I’m not really sure if he took us on the real loppet course or his own loppet course! It was a good ski and we even found a few surprises out on the trail. Jacked Up was getting hungry and as usual decided to prey upon the weak!! Law of the jungle baby! 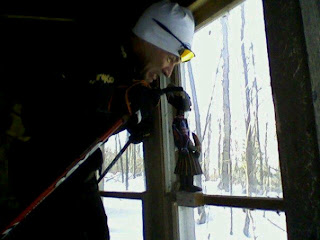 (Only the strong survive)

When we returned to the “JR” we were treated to a first class meal prepared by Amy, Stefan, and Rob. After dinner we had a bunch of visitors stop over and it was great to catch up with everyone. I caught a little grief for not keeping up with the blog but i’m not going to mention any names (Gabby)!

Sunday was the 15k mass start classic race. It was a quality suffer-fest for most. There was an early move by the boys from Craftsbury and the rest of us were forced to give chase. We had a good chase pack of 8-10 unfortunately and I fell of the back on the second lap. I’m not exactly sure how everyone ended up overall as the results have not been posted on-line. Post race reports were mostly positive except for Adam who decided he would try out his wax-less skis. Needless to say it was not a good day for that!

As usual the NYSEF crew put on a great event and it was hard to leave and make the trip south. What was even worse than leaving Lake Placid was what I awoke to this morning 55 degrees and pouring rain, needless to say the skiing in at the moment is questionable at best. Not good. 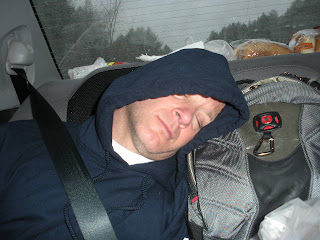 (Some were more tired than others on the trip home “Big Baby a.k.a Coin Game Winner”)