After taking two days off of skiing for travel and processing, I couldn’t believe how good it felt to simply get outside and go skiing again this morning.  So many things have been packed into the past couple of days that it felt like weeks since I’d been on snow. 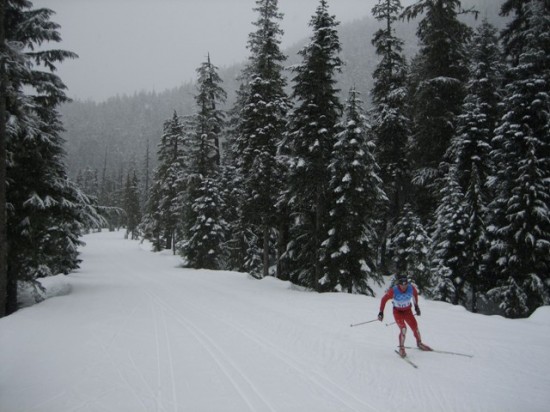 Simi Hamilton getting it done

The trails at Whistler were exactly as I remembered them; soggy and variable with plenty of snow.  The only things that have really changed is a bunch of scaffolding for banners and stands, as well as TV cameras lining the trails.  I’m sure they’ll be different with spectators lining the course, but for now, they’re the same old Whistler trails I’ve been skiing on for the past couple of years.  And it feels great to be back! 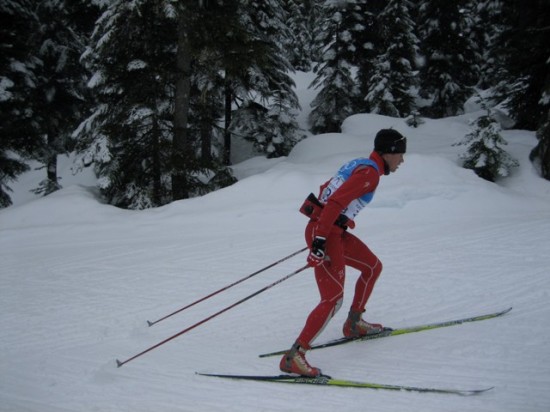 For as easy as it was to take cool pictures in Canmore, these photos really capture the dreariness of the venue.  If they look a little dark, imagine skiing out there.  As one of the camera men said as it was dumping wet flakes all over the camera he was trying to hook-up, “Hey, it could be worse.  It could be snowing!”  These are the conditions I’ve been expecting since I first skied here two years ago and I’m into it.

Fortunately, there’s not a lot to report today.  A light jog around the village this morning to see it in the daylight for the first time, breakfast in the massive athletes dining hall, the 45 minute bus ride from the Village to the venue.  Security is tight around here and that adds extra time to anything, but they’re obviously taking our safety seriously.  The only thing that was sketchy today is that our bus driver to the venue this morning is from Texas and said he’d never driven in snow before.  Hmmm.

After lunch, our entire team went through blood testing.  Cross Country and Nordic Combined are the only two sports at the Games, that I’m aware of, that are getting blanket blood testing (where the entire field is tested).  It feels great to know that we can show the World what we’re capable of doing as clean athletes. 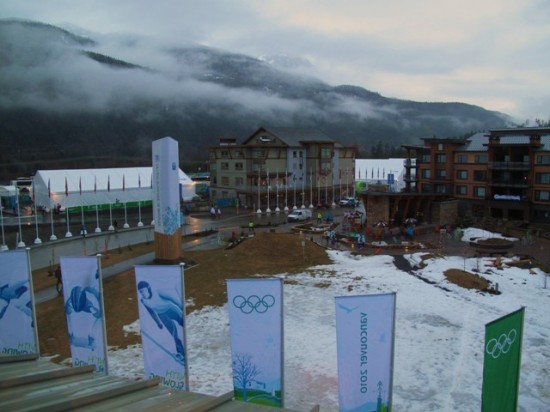 View from our room

James Southam and I are roommates here in the Village.  We might not have the biggest room in the Village, but we’re definitely the most centrally located, with the Village Square right below us.  Nice to be a 2 minute walk from the dining hall!

I finally had a chance to lay down this afternoon and get a nice nap in, while listening to the rain fall on the roof outside our room.  Nice to finally be settled in and have a day under my belt in the Village, getting back into a little bit of a routine again.  I’m heading out for a quick jog before dinner, then we’ve got more meetings later tonight.

I’ve added a couple of links on the side of this page to make this site a little more of a “one stop shop” for your Olympic news.  Let me know if you’re into it or if you’d rather keep this site simple.

A few words and pictures