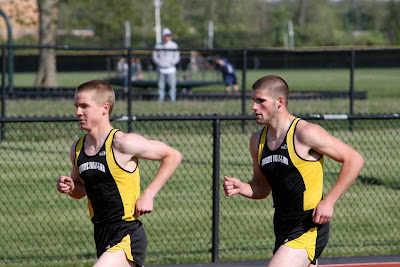 Steve and Alex jogging to victory
These 2 are fast runners. Some of the fastest in New York High School System if not the Nation. Yesterday they both ran stride for stride basically jogging a 1600m in 4:43. Unfortunately neither one of them felt like throwing down. As a spectator I would have enjoyed that. What is peculiar about these 2 is that neither of them run in an organized fashion all winter long. After the fall xc running season is finished. Which by the way both of them raced in the Nike National Meet. Steve Mangan the one in the lead he raced cross country skiing all winter. Steve is one to watch next year he is attending Big Green in NH(Dartmouth) Steve will be a threat to qualify for Junior Worlds in the future. Following him is Alex Deir, already a High School National Champion in the Steeplechase as a Junior. That was after playing Varsity Basketball all winter. go figure. Imagine if he xc skied all winter? He shows how hard a sport basketball is. 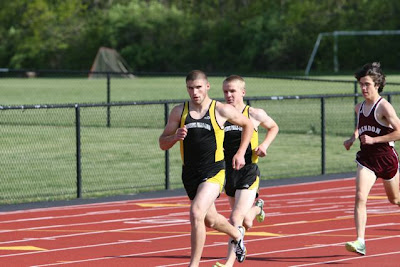