Next up in my series of skier retirements is the Swedish sprinter Anna Olsson (prior to marrying teammate Johan Olsson in 2008 she competed using her maiden name, Dahlberg).

Compared to the other skiers I’ve profiled, Olsson’s career was relatively short, stretching from 2001 to the present.  Also, as I’ve sort of given away in the intro, she was primarily a sprinter.  Olsson won the Gold medal in the team sprint event at the 2006 Turin Olympic Games.  Additionally, she reached the podium 13 times in World Cup races, all in individual sprint events.  This included two victories, once in 2006 and once near the end of this past season in 2010.

But since I’ve established a sort of pattern in these posts, let’s look at her distance results first: 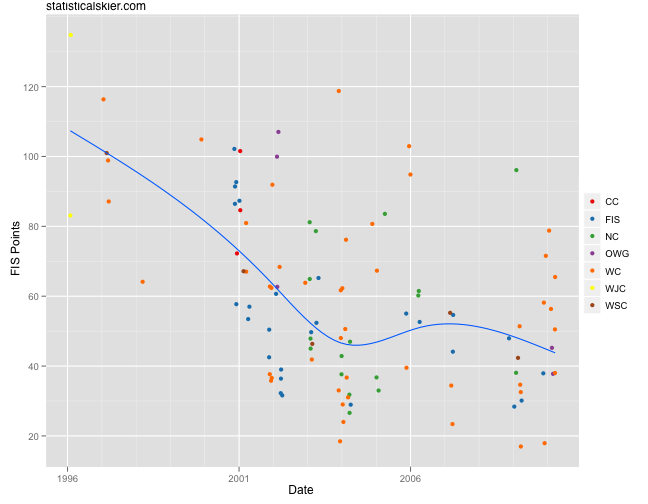 Notice the scale on the left hand side only goes down to 20 FIS points or so.  Like I mentioned above, Olsson was primarily a sprinter, but these distance results aren’t too shabby either.  As you can see, there’s a healthy mix of non-World Cup events here (CC= Continental Cup, FIS=General FIS race, NC= National Championships)

Olsson, as I mentioned, got married in 2008 and you’ll notice there aren’t any races for that season.  I’m not sure if she took a full year off or not.  She did do a few (but only a few) sprint races that season, so perhaps she had some issues with illness or injury, or maybe she just took some time off after getting married.  2004 was probably her best year for distance racing, though she did have a sub-20 point race in each of the past two seasons.  The three sub-20 points races you see here in 2003 and 2009 resulted in an 8th, 9th and 11th place finish (in that order, chronologically).  So while Olsson was probably a stronger sprinter (as we’ll see in a second) she wasn’t exactly a terrible distance skier.

Let’s see if there was a difference in her skating versus classic skiing:

The trend lines make the difference in favor of classic skiing look fairly slim, but it’s hard to ignore the large proportion of her best results in 2002-2004 that were classic races.  (Again, FC refers to pursuit races, where the athletes use both techniques in the course of a single race.)

Being a sprint specialist, we might expect Olsson to have a preference for shorter distance races.  Let’s see if the data support that… 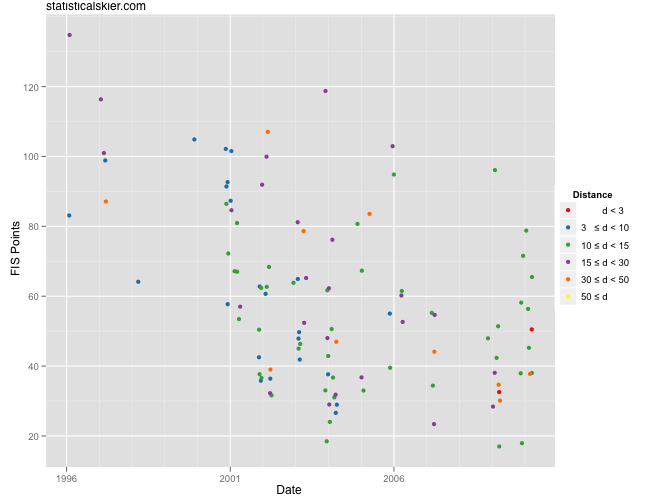 I don’t see much of a pattern there, so I’d call this one Busted, as they say.  I mean, she didn’t exactly excel at 30k’s but I don’t think that’s enough of a different to see a preference for shorter races.

Ok, with her weaker side out of the way, let’s take a look at her strong suit, sprinting: 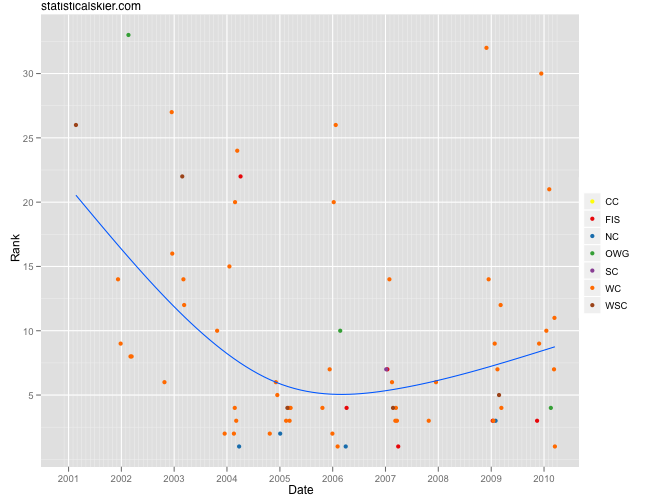 Now that’s a lot of top-five finishes (or better) over the course of 5-6 seasons.  Sadly, she never really put a good one together at the Olympics.  The closest she came was in her final season, finishing fourth this past year in Vancouver.  Still, that’s an impressive collection of results in World Cup sprint racing.

Can we see a technique preference in her sprint racing? 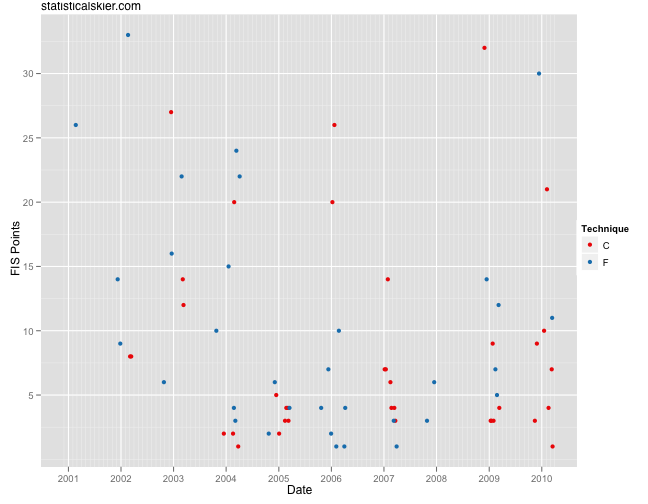 That looks pretty even to me, at least over the course of her career.  She had a stretch from 2006-2008 where she seemed to have better luck skating, but then reversed that trend in 2009 and 2010.

This is just for fun, but I stumbled across it while double checking some stuff about Olsson on the web.  It’s a video of Olsson’s quarterfinal heat at the Vancouver pre-Olympic World Cup this past season.  Sadly, Olsson had a bit of a mishap (breaking a pole in a distance race is recoverable, but sprints are so short that it usually means you’re done).  The real fun, though, begins when a coach tries to get her a replacement pole.

Could have been worse, I suppose, he could have slid right into her.

Alright, that’s a wrap for Anna Olsson!  So long!