Nat Herz wrote an interesting article today on FasterSkier.com about different ski companies’ policies regarding sponsoring athletes who’ve been caught doping in the past.  I thought this post might make an interesting companion to Nat’s article.

This post is going to look at race results data for skiers who’ve been caught doping.  I need to be clear right up front that looking for statistical evidence of doping (at least, in their race results) is not going to be a very fruitful exercise.  I mean, you’re sure to find some stuff that looks suspicious, but you’re also going to find plenty of stuff that decidedly is not suspicious.  Skier’s race results are just too variable to be much use in this regard.  Some people make big jumps during the offseason because, they, you know, trained a lot!

But data is data, so let’s take a look anyway.  I tracked down all the “official” dopers in cross country skiing that I could find (and had race results for).  We’re going to look at their distance results from every race I have in three groups: skiers with too little data to be interesting at all, skiers with a ton of data but nothing really “suspicious” stands out, and skiers with somewhat “suspicious” occurrences. 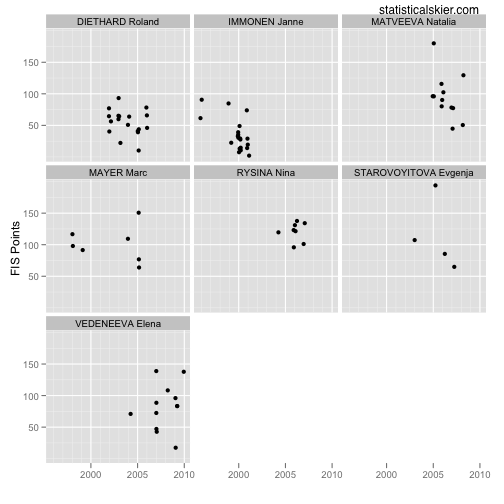 Meh.  Like I said, not much to see here.  I guess we could make fun of people for cheating and still not managing to break 50 FIS points, but I suppose dopers are people too.  Don’t want to hurt their feelings.

Here’s a considerably larger group of skiers, with many more races on record, where I can’t see anything particularly “suspicious” going on (click through for a larger version):

Some fast people, some slower people.  Obviously, I’m missing some of the data for several of the older skiers for the earlier parts of their careers.  Before you start going too far down the “oh, but look at how unusually consistent many of these skiers are” path, I could show you a dozen other skiers that look similar but are definitely not dopers (Kristen Skjeldal, for instance).  Still, I find Larissa Lazutina’s pathological reluctance to ski slower than 50 FIS points eery. 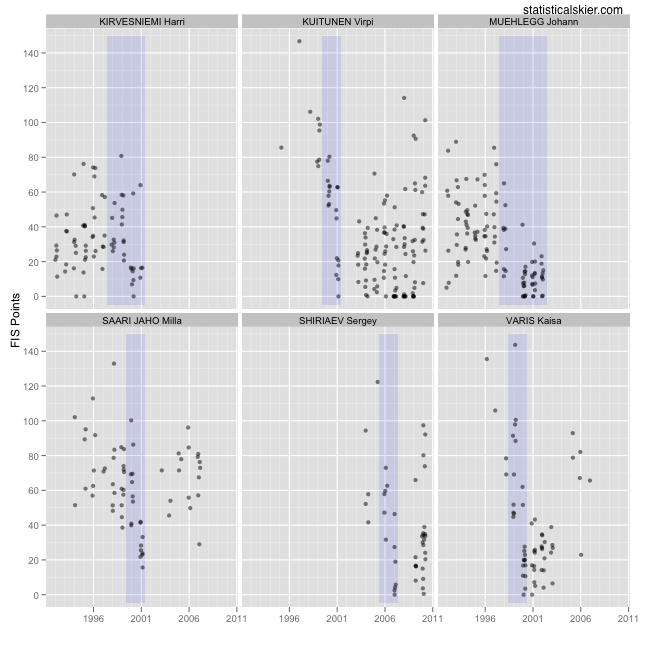 I’ve highlighted the regions that seem at least sort of suspicious to me.  Muehlegg is an obvious case, of course.  Spain was very good to him.  Then we’ve got several Finns (I think I misspelled Saari’s name: Jauho?) all implicated in 2001.  For Harri Kirvesniemi, I really wish I had the data for his entire career, which was really, really long.  He seemed to be tailing off slowly during the 90′s and then suddenly got fast again.  The rest of them just became significantly faster in the space of one offseason.

Again, I will remind you that I could totally find examples of skiers recording big jumps over one offseason that aren’t doping.  Heck, I wrote two posts about it earlier this week.  And I could only find something somewhat suspicious in 6 of the 27 athletes I looked at.  Still, it’s interesting data to look at…