Earlier this week I introduced an idea I had for calculating a points-like measure for sprint racing that was applicable beyond the qualification round.  You can go back and review the methodology here.

In this post I’d like to revisit this idea and look at how these new points look when ranking athletes.  First, I forgot to give them a name in my last post, so I need to remedy that situation.  Since the method essentially slices up the points available between the 31st finisher’s qualification points and zero and distributes them among the top 30, I thought I’d call them Distributed Sprint Points (DSPs).

I grabbed the World Cup and Olympic sprint results from just this past season, 2009-2010, and calculated the DSPs for each race.  Recall that I constructed DSPs such that they will never conflict with the post-elimination rounds rank within each race.  If i < j, the ith place finisher’s DSPs will always be no more than the jth place finisher’s DSPs.  So we don’t have to worry about mixing up finishing orders.

Let’s rank athletes using the average of their best five races (similar to how FIS operates).  We can examine the results using bump charts<1(click on images for larger versions): 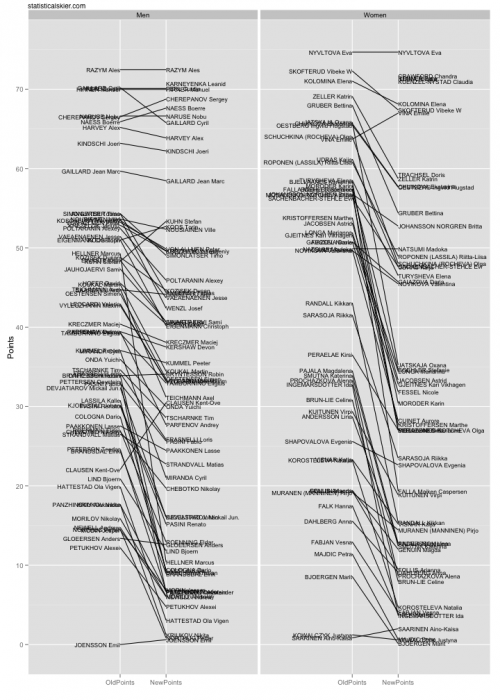 Just like the last time we used these types of charts, the names tend to be too jumbled to read them clearly.  But we can see that in general, DSPs are lower than FIS points.

I’m not particularly concerned about any alarmingly large differences here.  FIS points for sprinting only apply to the qualification round, whereas DSPs are specifically designed to incorporated information from the elimination rounds.  So they are really measuring entirely different things.

What’s a little more interesting is to look at what happens to the ordering of the athletes when we rank them using each measure: 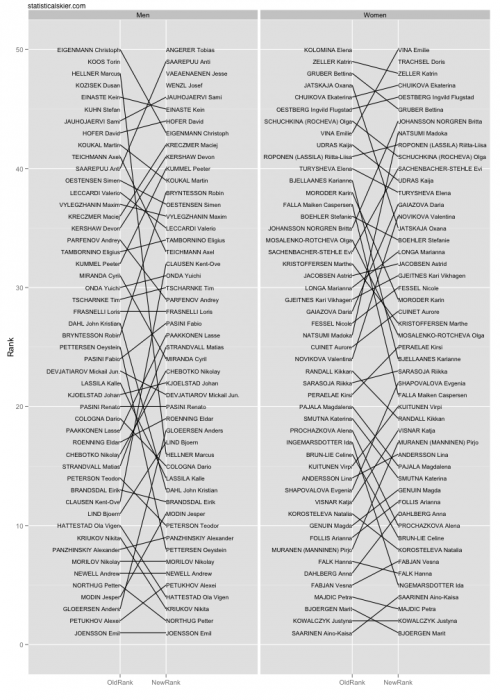 Compared to when we looked at EqPB based points for distance events, there’s a lot more shuffling going on here.  Again, this is to be expected, since we’ve moved from measuring qualification performance only, to something that at least attempts to include qualification and elimination round performance.

On the women’s side, I think DSPs are correctly shifting Aino-Kaisa Saarinen back a few places and putting Bjoergen, Kowalczyk and Majdic up front.  Marcus Hellner’s enormous jump up the rankings is impressive, and I think reasonably accurate.  Kikkan Randall benefits from DSPs slightly, as she hasn’t often qualified among the top 3 or so.

Andrew Newell stays right where he started.  This seems appropriate too, since DSPs don’t give you any extra consideration for qualifying quickly compared to how you fair in the elimination rounds.