So I decided that updating these every day would get tedious.  Here’s the standard bumps chart after stage 14 and the corresponding average speed bumps chart is below the fold: 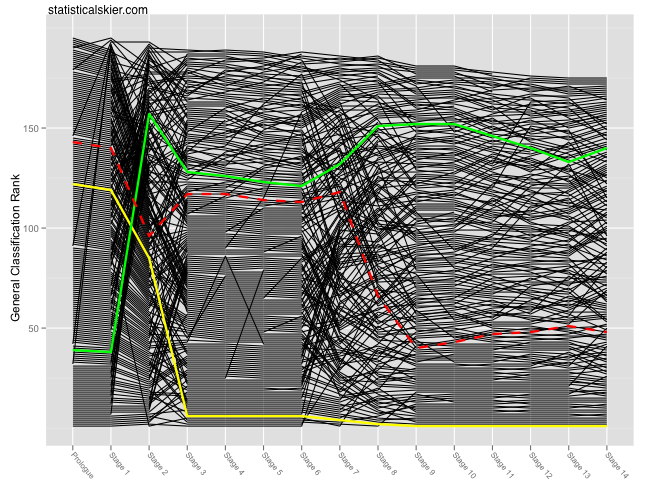 And the average speed version: 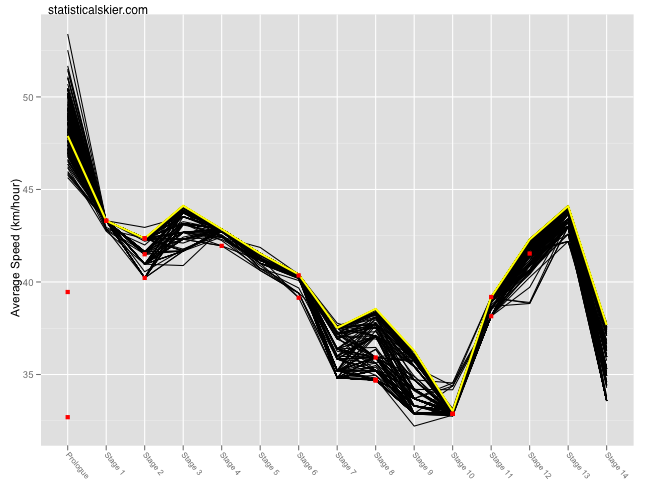 You’ll notice that this one looks a bit different.  I’ve added red squares that correspond to dropped riders.  The squares floating off in space in the Prologue correspond to riders who dropped after the Prologue, which is why they don’t have black lines at all.  Can’t draw a line with only one data point!

One bit of commentary I meant to include last time I posted this average speed graph was that I was mildly surprised at how near the top the Yellow Jersey line (Andy Schleck) is in each stage.  Serious cyclers may ridicule me for this misconception, but I think it’s an easy one for the very casual fan to make.  Namely that TdF winners will put in huge efforts on a handful of stages (mountains, time trials) but then they’ll sit back and not work very hard most of the rest of the time.  Now, that’s certainly true, up to a point, but clearly Andy Schleck isn’t exactly going slow on the sprint stages.  Probably most of the resting he gets on those stages comes from staying in the peloton and drafting.  But his average speed is still pretty high.

Finally, if anyone wants larger or higher quality versions of these graphs just let me know…