“Young” is a relative term, of course, which becomes clearer to me with each passing year.  But there are successful cross-country skiers over quite a wide age range, so it might be fun to focus in on some of the younger ones.  They are likely the names we’ll be seeing over and over down the line.

I have very arbitrarily picked the age of 24 as my cutoff.  So this will include skiers who were 24 or younger during the 2009-2010 season.  (Keep in mind, though, that I’m calculating people’s ages by simply subtracting their year of birth from the year the race took place in.  So if you happen to know some of these people’s actual birthdays, you might notice some ages are off by a year.)

The following plots are in the same style as my end of year ranking graphs.  I’ve lowered the requirements slightly so that a skier only needs to have done four races to be included, but other than that the method of construction is identical.  So the error bars here represent the variation (FIS points) in each skier’s best four races last season. 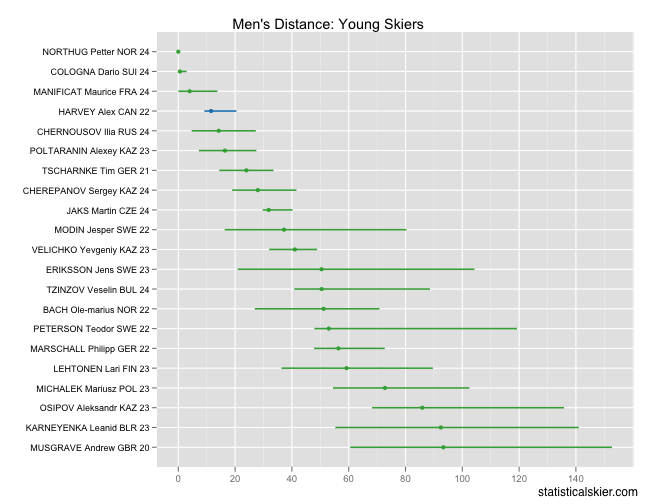 Of course, some “young” skiers are also the best skiers in the world these days.  (Marcus Hellner just missed my age cutoff.)  So setting Northug and Cologna aside for the moment, we’ve got the well known up and coming Frenchman Manificat, followed by Canadian phenom Alex Harvey.

One thing that stands out to me is that the Kazakh’s have quite a few fast young skiers in the pipeline.  It will be interesting to see how they develop over the next 4-5 years.  Another thing I notice is that aside from Northug, Ole-Marius Bach is the only Norwegian here.  This may reflect the Norwegian men’s reputed lack of depth in distance skiing these days, but of course we’re potentially ignoring some genuinely fast skiers who did fewer than four World Cups last season, so maybe not. 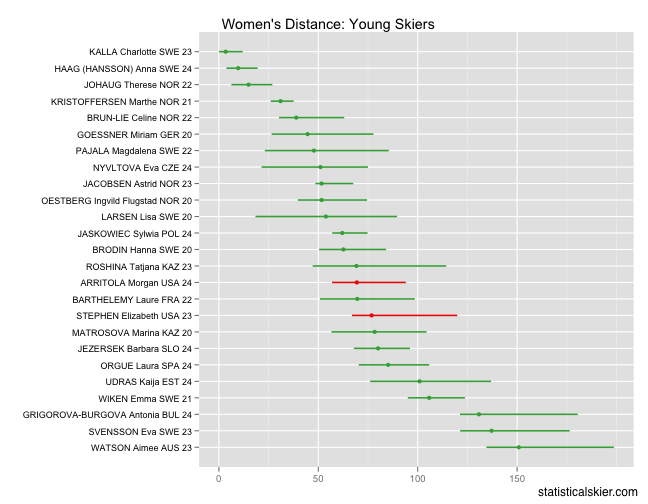 Once again, let’s set aside Kalla, Haag and maybe Johaug for the moment.  (I didn’t realize Johaug was so young!)  Certainly no lack of young Norwegians on the women’s side, eh?  A handful of 20 year olds stand out here, at least compared to the men.  Is it easier for women to break into the World Cup scene at a younger age?  Might that be a physiological thing or simply a numbers game stemming from there being more male xc skiers?