This past weekend was chock full of racing in Finland, Norway and Sweden.  There’s way too much for me to analyze, even looking at just the North Americans, so I’m going to focus in on just a few performances that I found particularly interesting.  Even so, this post will be quite long.

Results ranged from Kikkan Randall and Kris Freeman’s victories in the sprint and classic distance events to some rough races for Liz Stephen and Morgan Arritola (who I believe I read somewhere was sick earlier in the week).  The Canadians also had some promising results in Sweden.  It’s easy for people to get carried away, both positively and negatively, after just a few early season races.  In particular, it can be difficult to assess what exactly these performances mean when we have to wait a few hours (or days) for FIS point calculations and even then we have to accept that the penalty calculation is accurately adjusting for the strength of the field.

First, let’s say straight away that Kikkan’s sprint victory was unambiguously a stellar result.  It’s hard to ignore a race like that over skiers like Justyna Kowalczyk and Petra Majdic (among others) even allowing for the possibility that some of them may not have had their best days.  Personally, I’m unsurprised that Randall is capable of a sprint performance that strong; I’m more interested in whether she can perform at that level more than a handful of times a season, which would represent the next obvious jump for her.

In this post, though, I’m going to focus on just the distance races for a few North Americans who did particularly well.

What I end up seeing when people try to make sense of early season distance results are lots of pairwise comparisons:

This is a reasonable way to think about race results, but we’re assuming that the people we’re comparing ourselves to had “normal” races.  This clearly isn’t always the case and often we don’t even really have a great sense of what’s “normal” for each skier.  Can we do better?

Yes.  I’m going to ditch FIS points entirely here.  Instead, let’s take this idea of pairwise comparisons and expand on it.  Suppose that instead of comparing Kikkan Randall or Kris Freeman to just one or two skiers, we compare them to everyone?

Here’s what I mean.  I grabbed the top 40 skiers in the men’s distance races in Muonio.  Next, I found every race I could where Kris Freeman skied against one of these skiers (only in interval start races, just to be fair).  For each interval start race where they faced each other, I calculated the difference in percent back.  So for instance, say I’m looking at a race from last season where Freeman and Teichmann were both present.  I’d calculate the percent back for both skiers and then subtract Teichmann’s percent back from Freeman’s.

This will give us a picture of how Kris Freeman has fared against the specific set of skiers who raced in Muonio, which we can then plot over time to compare to this particular race.  The nice thing about this is that it will hopefully iron out some of the uncertainty about who may or may not have skied well/badly that day.  It’s totally possible for one good skier to have a terrible day (or a bad skier a great day) but it’s unlikely for forty skiers to all ski unusually well or poorly. 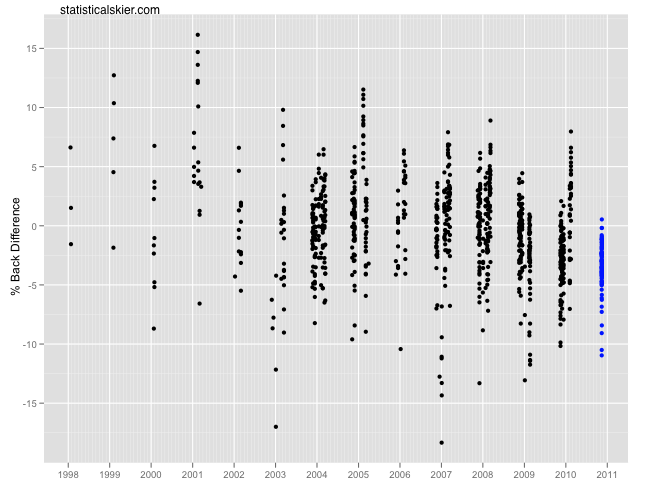 Each dot represents a race Freeman skied against one of the top forty in the Muonio classic or skate race.  Positive differences mean that Freeman was beaten by that skier that day, and vice versa.  The blue dots are from the Muonio races (which are nearly all negative, since he won and was second).

Note that against this particular group of skiers, Freeman has been steadily improving over the last several years.  Also, note that the Freeman’s bad races at the Olympics stand out as being quite different from his early season results in 2009.  Based on these data, I’d call Freeman’s races about equivalent, or perhaps slightly better, than his results at the start of last season.  Ironically, a lot of people might consider this a good thing, since so many people seem to worry about being “too fast”  (Freeman included) early in the season.  In particular, we should remember that Freeman began last season very well, with several excellent World Cups (4th, 7th), two good/ok (22nd, 32nd) and two not so good (57th, 59th).

So I think Freeman’s races this weekend were quite good, but not “jumping for joy” sort of good.  And that seems to roughly match what he said about his races himself.

How about Kikkan Randall’s 14th place in the classic race? 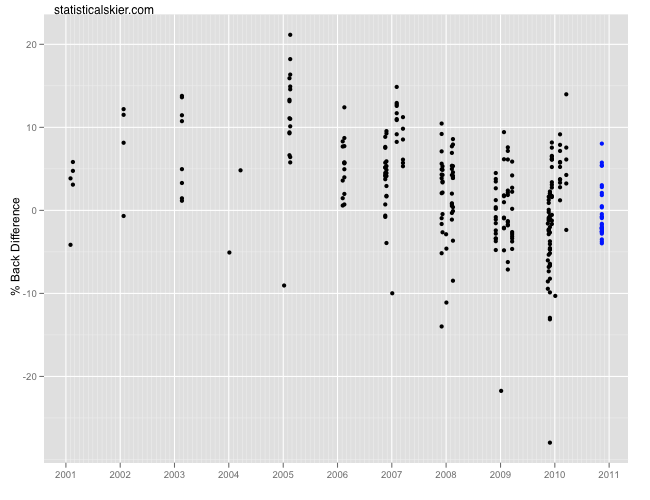 Randall’s steady improvement recently relative to the field at Muonio is also apparent, although it may have slowed down a tad recently.  A large number of the unusually low values (i.e. very negative) come from Kikkan Randall vs. Ida Sargent match-ups.  The rest are from a handful of people Randall has only raced against once or twice.  More on Ida Sargent in a bit.

Basically, I’d call this a somewhat below average distance race for Kikkan Randall against this particular group of skiers.  Which again, ironically, might reassure a lot of people who buy into the “Thanksgiving Turkey” theory of International Ski Racing.  While her average percent back difference to these particular skiers seems somewhat lower than what she managed last season, it’s still just one race, and they aren’t wildly out of line with her past performances.  So I’ll buck the trend here a bit and call that a solid effort by Kikkan, but not fantastic and I bet she can do better.

Let’s move on to some Canucks.

Dasha Gaiazova had a decent distance race in Sweden finishing 9th, I believe.  (One interesting thing about this analysis is that it hasn’t required me to look up what place anyone finished in or their FIS points.)  Her distance racing has faltered a bit recently, so let’s see if this represents an improvement: 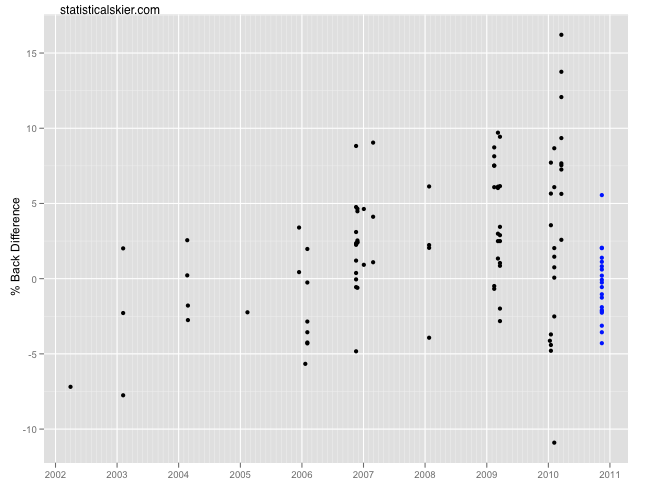 I’d say yes.  She’s not dominating the field, by any means, but she’s at least showing that she’s competitive with this group, whereas last season she struggled against them.

The boys, Devon Kershaw and Alex Harvey also had some solid races, finishing 4th and 5th.  How did these performances compare against previous match-ups with these particular skiers? 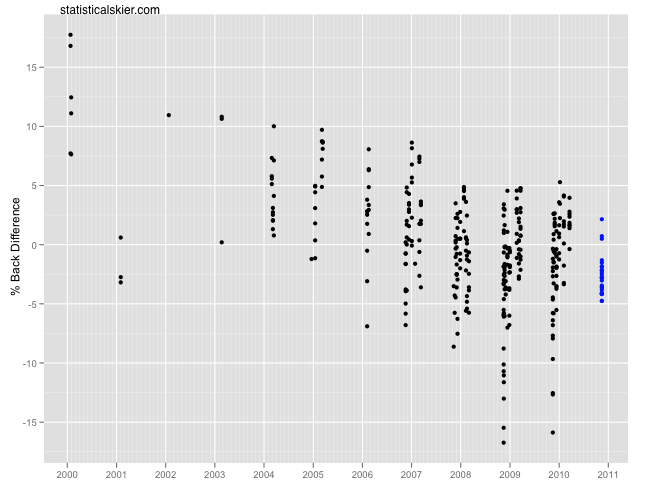 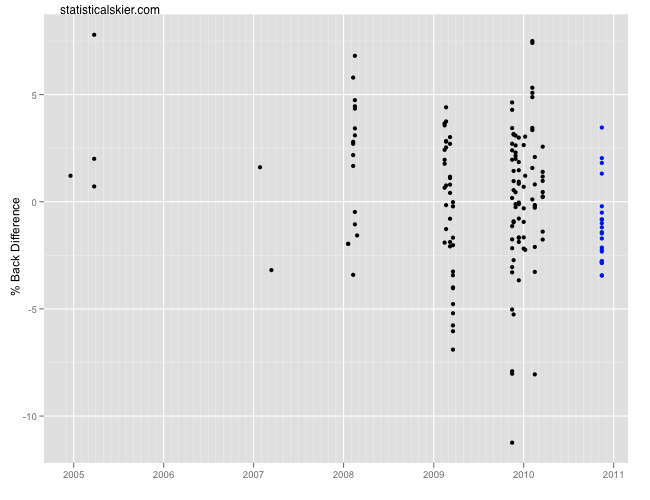 Again, these both seem on the “good” side of the spectrum, but not wildly ahead of where they were last year against this group of racers.  As with Kris Freeman, these seem to me to reflect solid starts to the season but not evidence (yet) of a major jump.

I promised that I’d return to discuss Ida Sargent.  She had a strong sprint result the weekend before this in Muonio, and then followed that up with an 11th in the sprint a few days ago and 25th in the classic race this weekend.  These are interesting results for the US skiing fan, since she seems to be making a good case for getting a few World Cup starts down the road.

I’m going to set her sprint results aside for the moment (analyzing sprint races requires different graphs and hence different code; I can only type so fast) and look at just her result in the classic race.  Since Sargent doesn’t have nearly as many international race results for me to draw on, I’ve dipped a little deeper into the results sheet for her graph: 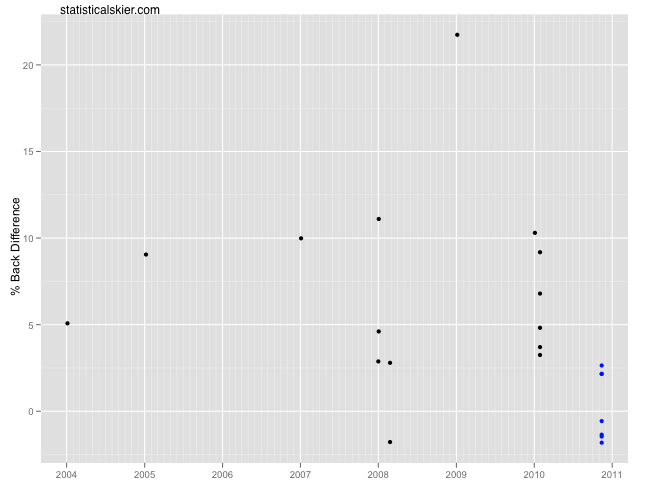 Even so, the data here are quite thin.  The majority of these data points arise from races she’s done against Kikkan Randall, and only a handful from other skiers.  Keeping in mind that this is primarily a comparison against Kikkan, and that Kikkan may not have had a stellar race on Saturday, it does look like Ida Sargent has made a bit of a jump in her distance racing.  Possibly.  We’ll really have to wait and see.  But given that she seems to have a reputation as a better sprinter, it’s probably more likely that we’ll see her getting international starts in sprint races.

So that’s my recap of the weekend’s racing.  Sorry if I didn’t cover your favorite skier!  When the racing turns to World Cup action, it will be easier for me to recap things, since everyone will be doing the same race, more or less, and I won’t have to contend with so many distance and sprint results in the same weekend.

Interview with Alexander Legkov: "It was a test race after 700 km in 10 days"