I’ll have a post up tomorrow running through some of the notable European results from the weekend.

The short version of the weekend’s distance races goes something like this:

Here’s a closer look at the Americans: 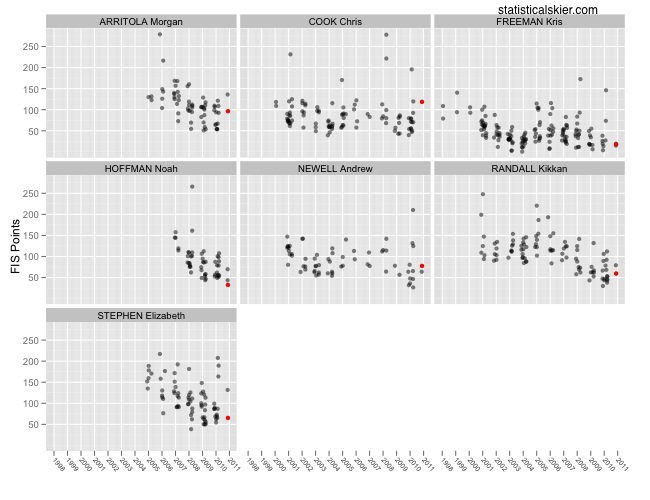 Ninth place for Freeman is pretty darn good, but like last weekend in Muonio, not “skiing out of his brain” good.  For an idea of just how “in line” this 9th place is with how he was skiing at the start of last season, check out the following head-to-head plot that looks at how he’s fared against the particular skiers at this WC race in the past: 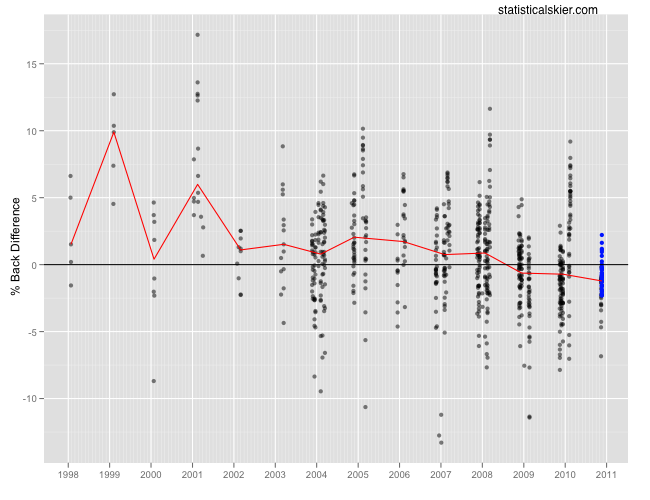 For a fuller explanation of these plots see here.  The blue is the Gällivare race, right in line with how Freeman stacked up against this crowd at the start of last season.  But the downward (i.e. better) trend of his median performance (red line) is promising.  Even more promising from my perspective was that it came in a freestyle race.  Freeman managed a 7th in a 15km freestyle last December, a 10th and 14th in 2007, a 15th in 2005 and if you go all the way back to 2003, a 6th place in a 30km mass start.  He’s generally been more comfortable classic skiing, so it’s nice to see him show some speed in freestyle.  It also makes me hopeful for his chances in a 15km classic race, assuming he can keep this up.

As for Kikkan Randall, 19th is also pretty solid and confirms her steady improvement in the distance events.  If you look at the corresponding head-to-head plot for her from Gällivare you see that she’s a little further behind the WC crowd than Freeman is, but the trend is encouraging: 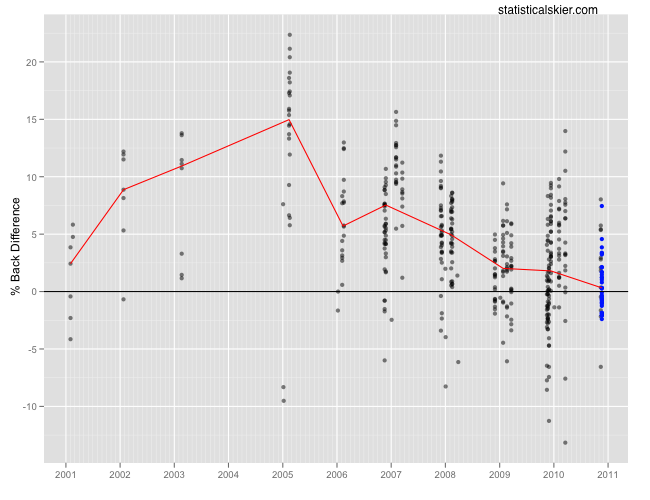 If she sustains this kind of a year over year improvement for the rest of the season, I think we’re looking at her consistently being in the top 20-25, but only occasionally poking through to the top 10, if at all.

The other two “good” performances belonged to Liz Stephen and Noah Hoffman.  I had a sneaking suspicion that Hoffman might be primed for a good year (keep in mind that he’s still really young).  Obviously, it’s just one race, and anything can happen.  When I look at his graph above I find myself thinking about what it’ll look like in March: are the rest of the dots going to fill in above that red one or not?

Liz Stephen’s race was solid, but a little less obviously so.  This sounds a little odd seeing as how she finished inside the World Cup points at 25th, but let me explain.  Her FIS point trend above is a little deceptive in that it hides the fact that against WC fields like those on Saturday, she’s been, well, a bit inconsistent: 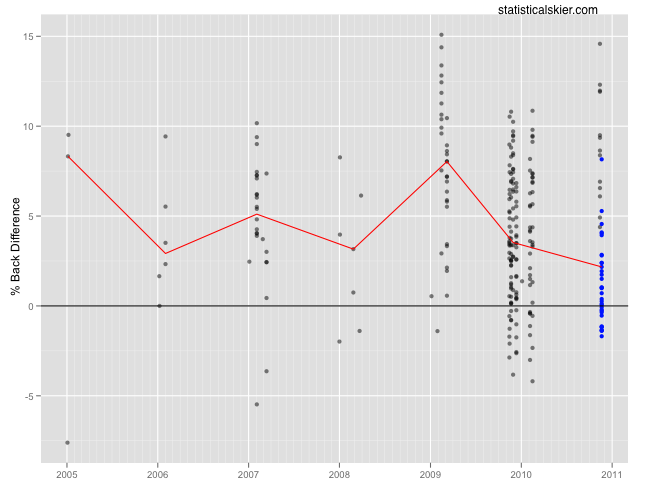 That’s not the sort of “trend” you want to see in a young, developing skier.  The good news is that if she keeps this up we’ll actually have two seasons of improvement in a row.

I don’t have much to add on Newell, Arritola and Cook.  While it’s certainly nice when Newell skis well in a distance race, and if he wants to contend in the TdS, he’ll certainly need to get some starts in, I don’t think anyone is really fretting a sub-par distance race from him.  Arritola had an unimpressive race but one that is well within the range of what she’s done over the past two seasons, which is itself a concern.  As always…just one race.  No reason to panic quite yet.  I think anyone who’s strapped on a pair of boards has had a day like Chris Cook’s on Saturday, which means we can all agree that the less said the better.

The Canadian men certainly had a rough day as well.  I confess that I was surprised to hear about Babikov and Grey travelling to Europe so soon before a race.  I know I couldn’t manage that kind of turn around, but who knows, they know their bodies better than anyone else.  I feel like those two can chalk things up to travel, fatigue, first race, etc.  As for Kershaw and Harvey, well, let’s take a closer look: 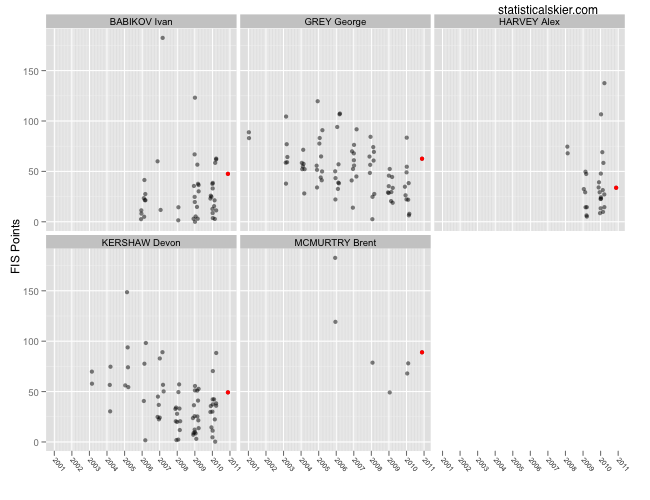 Definitely a bad race for Kershaw; terrible really.  Once again, though, with the constant refrain: just one race!  We could easily find ourselves in March with that dot being his worst race by far all year.  Here’s to hoping…

As for Harvey, not his best race, but he was 34th.  I mean, that’s not terrible, really, but I think after last season, expectations for him might have been a tad high.  He’s still pretty young, remember, and note that it wasn’t like he was just pumping out the top 15 results left and right last year in interval start races.  In fact, a surprisingly large number of his best results are in mass starts.  So I actually think this was a pretty decent early season result for him.

Ok, that’s all I’ve got on the North Americans.  I’ll tackle some of the Euros in a subsequent post…