As always, there’s lots of stuff I could focus on, but we can’t have everything.  As is usually the case, the weekend was a bit of a mixed bag for the North Americans.  Kris Freeman continued to look quite strong despite some bad luck with his poles.  Alex Harvey and Devon Kershaw had much stronger weekends this time around.  Kikkan Randall had more solid distance races, although her sprint race wasn’t stellar.  And so on.

Let’s start out with the same style graph I used in my earlier post, only this time highlighting the North Americans: 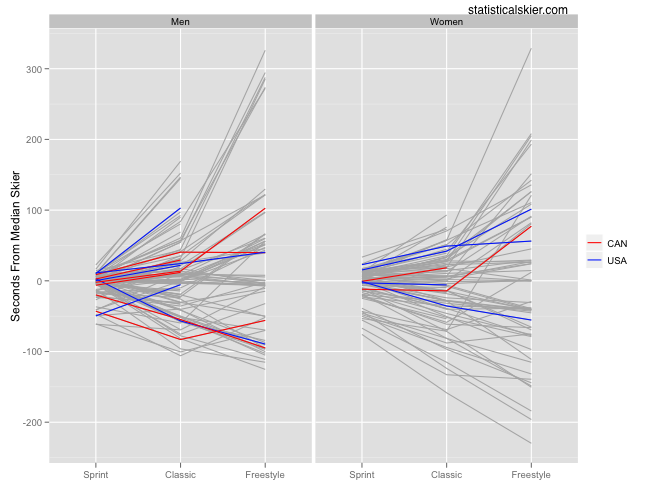 While I haven’t labeled the athletes individually, it should be pretty clear who’s who.  Harvey clearly was having a great weekend but couldn’t hold on in the skate race yesterday.  Kershaw and Freeman did well despite pretty pedestrian sprint races.  As for Randall, if she had had an ok (for her) sprint race, that could easily have bought her 20 seconds, and with a great sprint race (if we kept the distance results the same, which isn’t really realistic) she could have contested for a place in the top five.

I need to comment  a bit more on Stephen and Arritola, since I disagree somewhat with the characterization of their freestyle races in this FasterSkier recap.  As a commenter on that article correctly points out, much of the gains in overall place they made were the result of other skiers DNF/DNS-ing (at least half, or a bit more).  I’m sure this will spark some measure of debate, but I have to agree with the original commenter.

Let’s start with the graph above.  We’re plotting seconds from the median skier after each stage, so in the case of Arritola, she lost time yesterday on the median woman, not just the leaders.  Stephen held about even relative to the median woman.  If we isolate just their skate performances yesterday in terms of FIS points compared to their other WC starts we get the following: 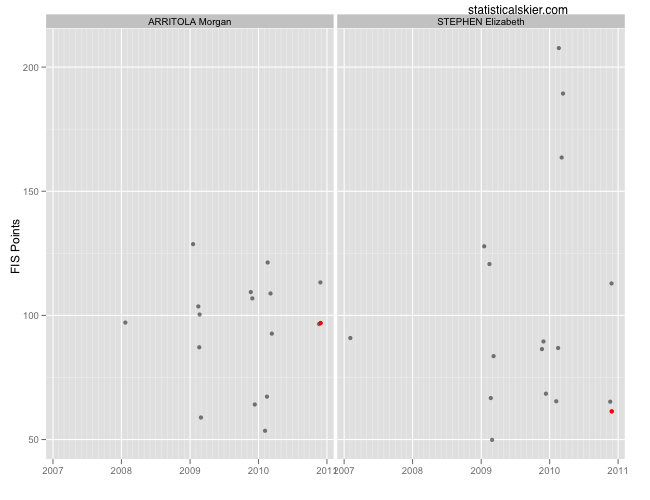 Of course, now we’re comparing them only to the winner on Sunday’s stage (Therese Johaug).  Even then, it looks like Stephen had a decent race while Arritola had a pretty bad one.  For an even closer look at the data, we can focus in on just the head-to-head matchups for each woman versus their competitors from Sunday and look at the difference in their respective percent back.  First, Liz Stephen: 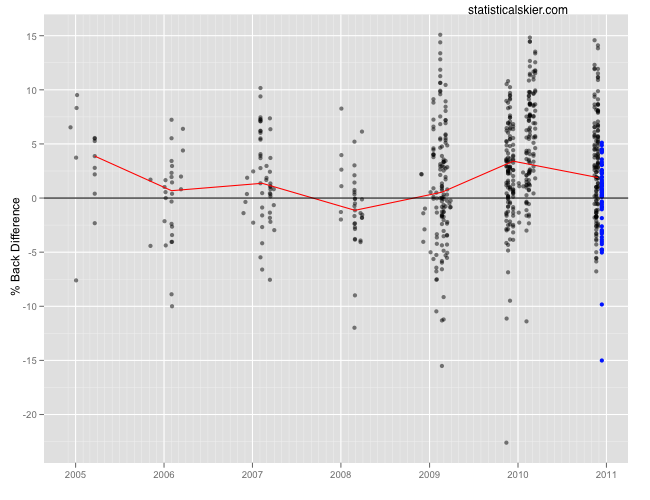 Keep in mind that unlike some of the other versions of this graph that I’ve made, this includes pursuits and mass starts, since yesterday’s race wasn’t an interval start race.  Also, I nudged the dots for yesterday’s skate race over a bit (the blue) so they are more visible.  As always, the red line indicates the median for all races in a particular season.

Once again, this looks like an ok race for Stephen, but nothing spectacular, though perhaps a modest improvement on her other races this season.  As for Arritola: 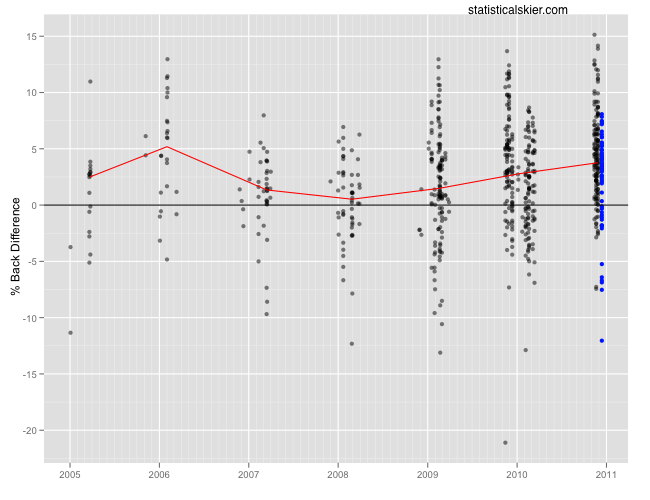 This looks less good overall (above zero is bad, below zero is good), but again, not substantially different from Arritola’s races so far this season.

As always, I don’t mean to pick on these ladies.  I just think it’s important to be clear about when people have raced well or not.