Sadie BjornsenNovember 29, 2010
We just finished our first series of racing in West Yellowstone, Montana this past week. APU threw down an amazing team performance as well as many amazing individual races. There wasn’t a single race that APU didn’t have a team member standing on the podium. It has been so fun to race as part of this group throughout the week!
As far as my week of racing went I came away very happy with the first series of racing. I got my first SuperTour podium in the Sprint races on the first day of racing. It was an interesting set up, as we had two prelims separated by only an hour. With temperatures down in the single digits, and little rest- it made for a very tough day. Regardless, it was fun to throw down and get the first couple of races under my belt. APU has had a few time trials already back home this month, and with so many competitive girls on the team, for once I wasn’t stepping into these races with cold feet. 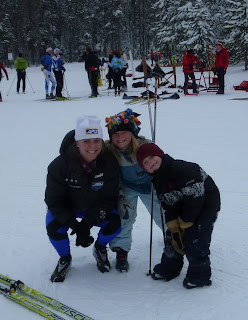 My little cousins after the race- great little cheerers!
Friday and Saturday’s distance skate and classic races had their high’s and low’s. I was pleased with the consistency over the week. One of the highlights was Saturday’s classic race when APU took top five americans in the woman’s race. It has been so nice to ski with a team with such depth- and then show up at the races and feel like any one of the girls on the team can pop an exceptional race and be standing on the top. A great example of this was Friday’s distance skate race when Kate Fitzgerald won, finishing a second in front of Holly Brooks. Congrats to Fitz! 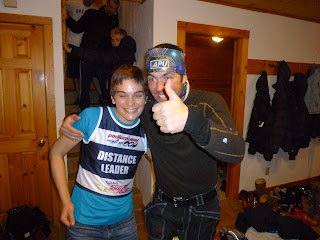 Fitz as the Distance Leader and excited coach Flora 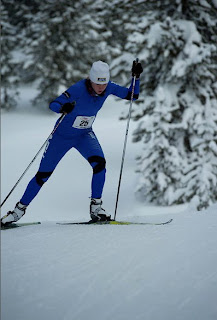 Thanks to the coaches and wax tech’s for all the work over the week. It is incredible, on this team the tech’s know all 18 skiers fleets of skis and manage to pick the best ski for every skier. THANKS 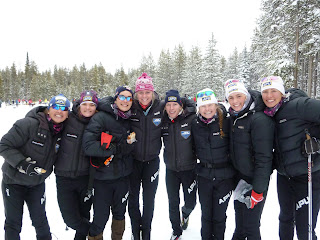 Team after Racing- Cheering on the boys
We are now off to Silver Star, Canada for a week of training before we hit another serious of races next week.
Results from the week are posted here:
http://summittiming.com/races/race_results.php