This is part two in a short series of season preview posts on USST athletes in which I’ll review each skier’s results to date and make some guesses about how they’ll fare in the upcoming season.  I don’t have any special insight into the future beyond my database of past race results, and I certainly am not using some fancy predictive model.  While I’ll likely support a fair bit of my guesses with data of some form, I obviously wouldn’t take any of my predictions to Vegas with you.  And of course, my guesses are just me being a cynical realist, not necessarily an expression of what I’d like to happen.

The two newest members of the USST are kind of tough for me to write prognosticating posts about.  They simply haven’t accumulated as much racing data for me to play with.  I’ll throw up some graphs anyway, but in the end I have even less to go on here than for Morgan Arritola and Liz Stephen.

Simi Hamilton sort of burst onto the scene last year with some impressive sprint results, including a win at US nationals and then winning the qualification round at U23s (he had a bit of a mishap with his pole in the elimination rounds and ended up 26th).  This led to his inclusion on the US Olympic team, where he managed to make it through the qualification round to finish 29th in Vancouver.

He did three other WC sprint races last season, qualifying (in 23rd) for the elimination rounds in one of them to finish 28rd.  That’s just not a lot of international level racing for me to compare to other sprinters.  Still, here’s a plot of his sprint results so far: 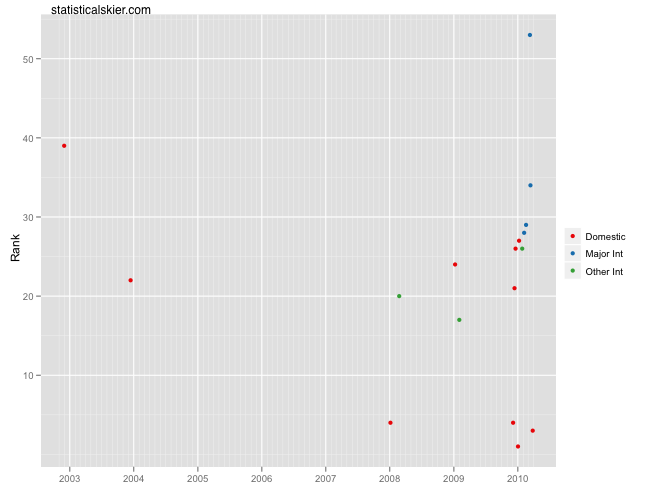 Hamilton’s focus on sprinting appears fairly recent to me.  He actually was doing plenty of distance event up until last season.  My guess is he’ll pretty much drop the distance events, but you never know.

Noah Hoffman, by contrast, is more of a distance skier.  Also, he’s quite young.  Here are his distance results so far: 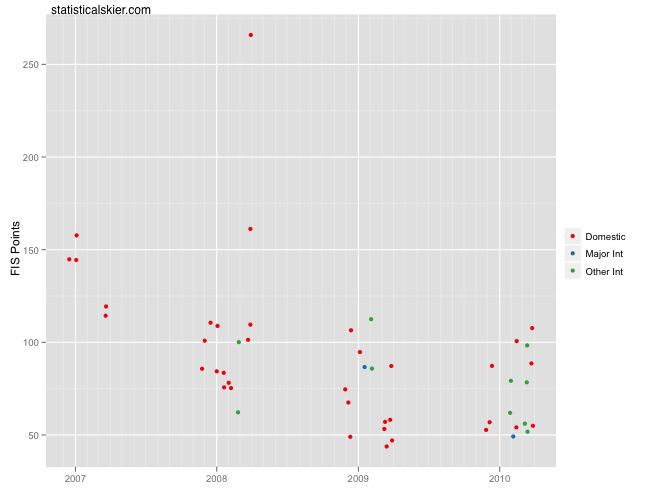 Oddly similar to both Arritola and Stephen (although 50 FIS points means something a bit different for men and women) and of course Hoffman is a few years younger than them.  You’ll also notice that Hoffman had done even fewer major international events than Hamilton.  Hoffman’s had a few top 5 finishes at US Nationals and SuperTours over the past two seasons and he skied quite well in Europe last year at some OPA Cup races.

With so little to go on, data-wise, I’m loath to make predictions.  But just for fun, here’s some wild speculation: