This recap is going to be fairly short.  I’m going to pass over Kris Freeman and Kikkan Randall, since neither had spectacular races but in neither case does it seem particularly significant to me.  Freeman reportedly was recovering from a cold and still managed a decent, but unimpressive race.  Randall had a legitimately bad race, but after a string of significantly improved distance results from her, it doesn’t surprise me to see her come back to earth a bit.  Also, she tweeted that she actually held back on that effort a bit to save herself for Sunday’s sprint race, which makes perfect sense for her, I think, and certainly seemed to pay off.

The Canadians, in what is becoming a tiring refrain this season, were a bit of a mixed bag.  Devon Kershaw had a solid race (9th) and George Grey perhaps shook off his early season struggles for a decent result (32nd).  Ivan Babikov, who is a stronger skater, had a race that was somewhat below average overall (38th) but actually fairly normal for a classic race for him.  But that’s by FIS points; here’s another view just using rank: 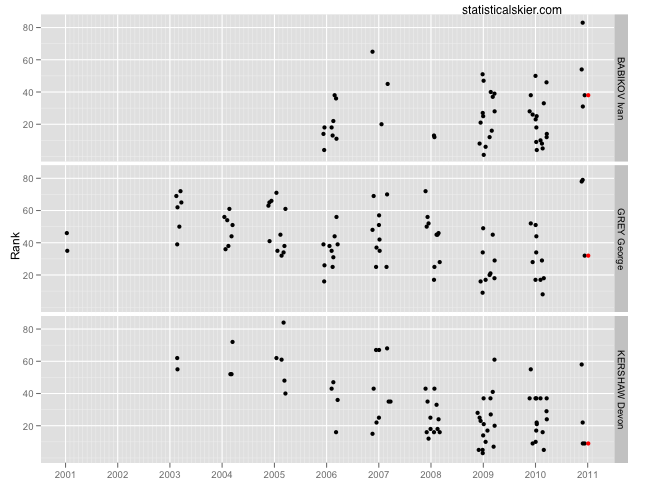 The red is Saturday’s classic race.  Babikov is the only one of these three whose results look seriously out of line with the past.  This might be another lesson in how much the Olympics dominate our field of vision in skiing.  The Canadian men skied so well and got so much attention from their results in Vancouver last year that it’s easy to forget how often these guys were outside the top 20-30 even just last year.  It’s a brutal game, the game of expectations.

Sadly, things aren’t getting much better it seems for Liz Stephen or Morgan Arritola.  Their points from this race certainly look bad, but let’s be cautious since there was such a huge gap from the winner to the field.  For a more comprehensive view, we’ll go back to the percent back difference plots: 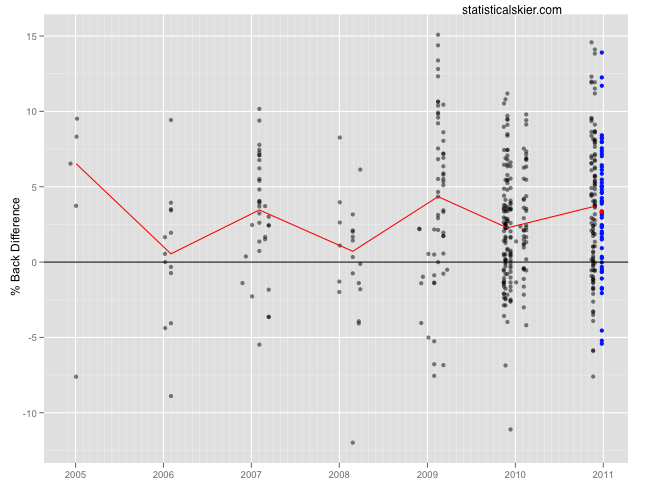 Difference in % Back between Stephen and the field. 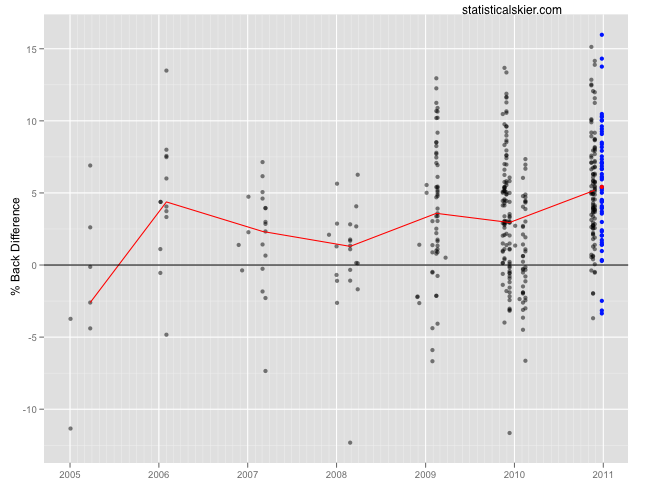 Difference in % back between Arritola and the field.

Both of these ladies were far enough back in this race that I decided to compare them to the entire field of racers.  As always, each dot represents an instance of them skiing against one of the athletes from the race in Davos.  Positive values mean they lost (bad) and negative values mean they won (good).  The red line is the median for each season and the red dot is the median for just Davos (blue).

In both cases things look about the same as what they’ve done overall this season, which isn’t all that great.  Liz Stephen had a decent race back in Gällivare (25th) but that’s about it.  What’s worse is that they actually seem to be doing slightly worse compared to last season, although there’s plenty of season left for them to turn that around.  I for one will be very interested to see how they fare against a domestic field later this season.

Crepes and Skating in Quebec