Marit Björgen returned to action this weekend in (mostly) convincing fashion. It’s becoming very interesting to see whether anyone will be able to beat her in a distance race. She certainly has shown some chinks sprinting, with Kikkan Randall stealing a freestyle win and Petra Majdic grabbing a classic victory yesterday. But with another World Cup win this weekend, the all-time comparisons are coming out again, mostly to Bente Skari Martinsen, but really Elena Välbe needs to be in the conversation as well.

FIS likes to count the total number of World Cup victories as a sort of benchmark here, although the logic behind what they decide to count as a “World Cup race” is, well, lacking. But no matter! Despite my differences with their counting method, we certainly agree that Björgen is among the greatest of all time.

This problem actually extends to more than just the winners. By placing a hard lower bound on your performance measure (0.00), you end up compressing the very best athletes (say, the top 10 or so) into a small numerical range, which makes it difficult to see meaningful differences between them. For example, let’s look at the distance results using FIS points for these three ladies: 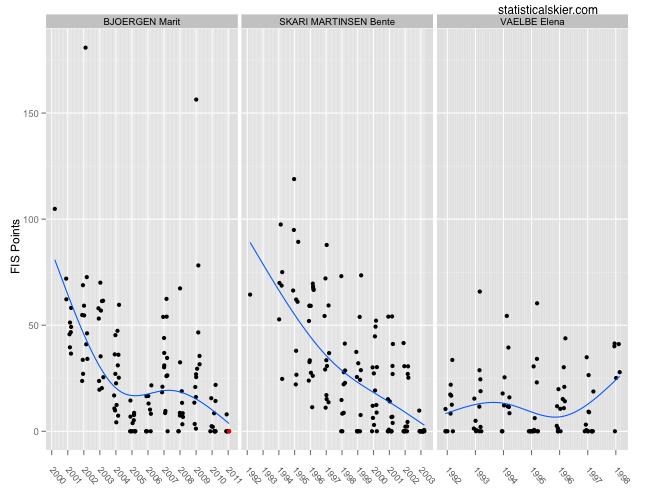 This weekend’s win by Björgen is shown in red. Granted, I’m missing a good chunk of Välbe’s early career, but I think I’ve got enough of when she was in her prime for a reasonable comparison. Notice all the dots squished down near zero? It’s really hard to tell what’s happening, although we can at least see that Välbe didn’t have a whole lot of slow races (again, keeping in mind that this might change if I had the first part of her career).

Instead, let’s look at a slightly different measure: percent back from the median skier in each race. 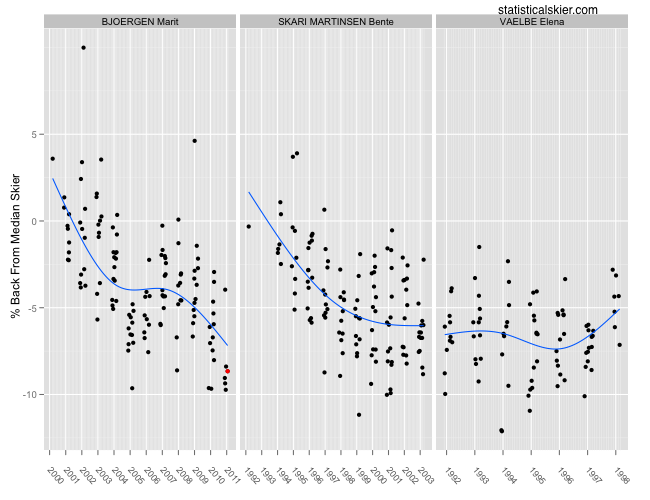 Using this measure, how far off the front the winner is can actually be reflected in their percent back, rather than just inflating everyone else’s. If someone is still winning, but by a smaller margin, that will be reflected here. A few basic observations:

This graph also puts Björgen’s season to date in some impressive perspective. Her one slowish race this season (~-4% behind the median skier) actually came in the Kuusamo pursuit when she essentially had that tour’s overall standings wrapped up. The rest of her races look like the beginning of a season somewhat more dominant than anything Skari put together and possibly rivaling Vaelbe’s 1994-1995 campaign.

Now, one possible catch here is that Björgen, and to a lesser degree Skari, have had to do considerably more mass start events, which discourage the sort of big gaps that we’re measuring here. Rather than attempt to adjust these values (which is possible) let’s just look at only the interval start races and see if the picture changes: 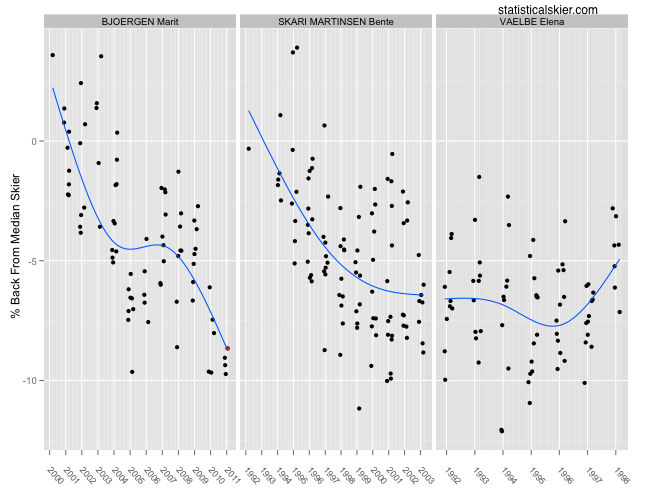 Note how many of Björgen’s results from last year are gone, and how fast the ones that remain are! Other than that, I don’t see any dramatic shifts. If anything, this makes Björgen’s performance look even better.

Peaking for the Big Race