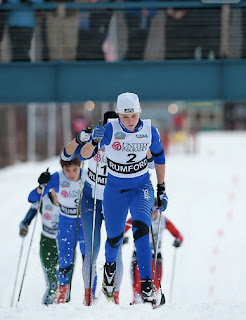 www.flyingpointroad.com photo- during the heats

Yesterday marked the first day of 2011 U.S. Nationals here in Rumford Maine. I must say I have never raced on so little snow in my life, but race managers managed to throw together a super impressive race out there!

The day started with a 1.4km qualifier where APU woman had an impressive showing with six skiers qualifying in the top ten. I ended up qualifying second, behind Holly Brooks, and then close behind were Morgan, Katie, Fitz, Becca and Ky! The mens qualifier was stacked with APUers as well. Lars Flora won the heats, with Reese Hanneman close behind. Results posted at: http://www.chisholmskiclub.org/2011_us_nationals/results.htm
At 12:45 when the heats began, the snow was turning into puddles, tracks were disappearing, and the dirt was showing through. Regardless everyone threw down pretty damn hard and had tons of fun. Because the only snow that Black Hill has right now is placed on the sprint course, there wasn’t many options for warming up on besides going up and down the short alpine run. This made things a bit tough- but everyone seemed to remain positive and have fun.
I went through the heats with the plan of attacking from the start and going from there. All my heats were pretty fun as I had between 2 and 4 of my teammates in each heat- which made me feel right at home 🙂 By the A-Final heat when I lined up with 3 other APU girls, I was starting to feel the effort catching up to me. I was able to get out of the start quick and keep my eyes on Holly Brooks throwing down every last bit of energy. As I pushed over the top of the last hill I headed down the hill in second place. From there things switched around a bit with varying ski speeds before we put out every last bit of energy down the double pole finish. I crossed the line 4th, 3rd american…. which meant APU swept the podium!!! My first Nationals podium ever 🙂 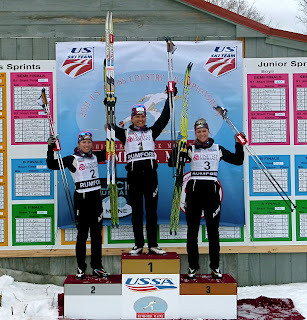 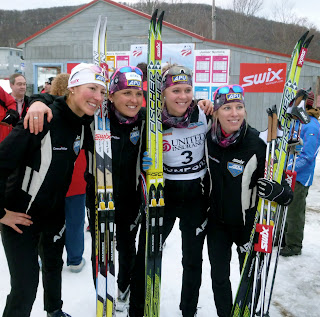 Top 4 Americans!
Big thanks to the wax techs and coaches for bombs skis! And congrats to the boys squad for rockin as well! 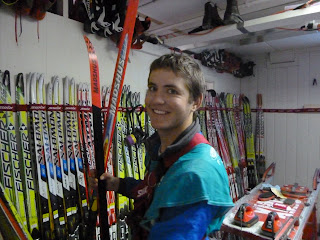 Mike Matteson getting after it!
Races are postponed until wednesday because of the lack of snow… but good news is its supposed to cool down and they are going to start making snow.
Here is a link to the front page of Alaska Daily News today!
http://media.adn.com/images/pdf/A1/anchorage_01_03_11.pdf 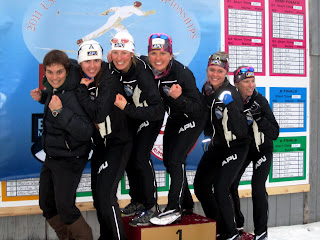 Canadians Go For Broke on Tour With "Rock Star" Bus

Big Smiles Down East in Rumford