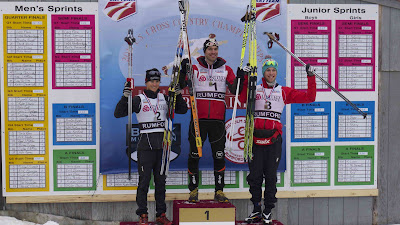 Yesterday marked a special day for MOD skiers. Certainly, the highlight was Torin’s top spot on the podium in the classic sprint. Being a big, powerful skier the sloppy conditions did not play to his strengths but our technique emphasis this year has paid off in a renewal of his older, flowy style which is allowing him to ski more economically and apply his prodigious horsepower with more discretion.

This was amply demonstrated through the tough day as he skied very well paced and controlled in the qualifier and in each heat. Only really being caught napping by the young Erik Packer’s impressive surge to break up the pack on the big climb during the quarter final. Sun Valley’s Mike Sinnott afforded Torin with the next test in the A final when he made a similar move on the big climb. He and Torin broke open the pack but with a few strong, long strides Torin pulled into the lead over the top and continued to out pace Sinnott to th 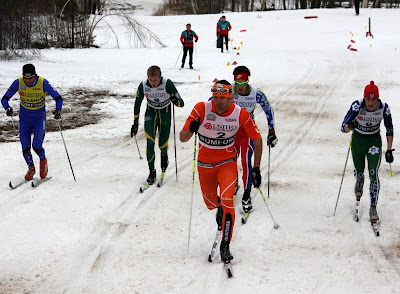 Torin leads the A Final with former MODster Erik Bjornsen (in the ugly green suit);-)

MOD alumni Sadie and Erik Bjornsen whom I have coached for the past umpteen years, but are now moved on to collegiate programs, both turned in top results as well. Sadie finished 4th (3rd US skier) in the ladies sprint while Erik powered to a very strong but unsurprising 4th place in the men’s race, just getting nipped for the podium in the final sprint to the line. So, despite some words in the press to the contrary, the little ski program from the little valley in Washington must have been doing somethings right. Only one other ski program in the US can boast of such strong results and they have more money than God and more skiers than you can count. So, yes, I am proud of my skiers'(both past and present)results. 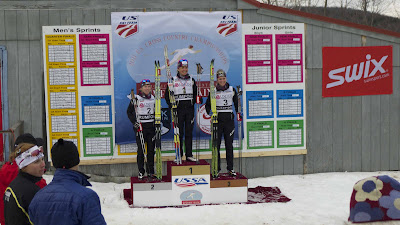 Sadie is all smiles too.

With an unfortunate ski choice going into the qualifier MODster Sam Naney pretty much put himself into an untenable position. In these sloppy, red klister conditions the trade off between kick and glide is dramatic and slow skis take a huge toll. Sam drew the short straw in ski selection and, despite looking better than I’ve ever seen him in a classic sprint – strong and powerful – was doomed from the gun. But we are not counting him out for the skate sprint, as his superb speed and strength on this course should put him in a great position to turn some heads!

I owe huge thanks to my skilled and dedicated wax crew: the perenial and the man to have on yoru kick wax table, Ben Husaby. Newcomer to our crew but super savvy, Justin Beckwith of Green Vally Mountain School over the hill in Vermont, and the female “fixer” extrodiniare Janice Sabilia. Together we put our motley crew of MOD, Bend Endurance Academy, GVMS and NENSA skiers on as good a skis as anyone had. Hat’s off to all of you. You were a big part of getting Torin to the podium. Once again the elves at Toko provided the juice to get the skis to top speed.
For the techies out there: We ran on Toko Yellow Jetstream block covered with Toko Helix spray. Mark Waechter at Nordic Ultratune provided one of his i5 grinds that we have been finding super in wet saturated snow.

Now let’s just hope the snow holds out for the rest of the week.