Once again thanks to my data connection over at WorldofXC.com for the sprint splits data.  The overall picture for the women’s race is about what you’d expect: 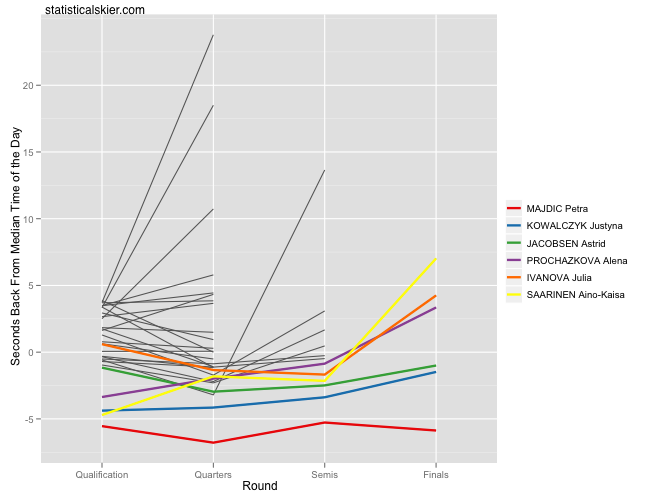 Petra Majdic basically crushed everyone in sight, and in fact the closest anyone really came to her was in qualification.  After a rough start to her season, this is pretty eye-opening.  The question now is which Petra Majdic is the “outlier”?  Was she skiing unusually poorly up to this point and this effort is more “normal”?  Or is it the reverse?  Is her form actually off this year and this particular race was just a day where she felt unusually good (or perhaps some others felt unusually bad)?

I wish I had watched this one (and perhaps I’ll go track down some video), since from the descriptions I’ve read Kowalczyk’s descending “skills” were prominently displayed on this course.  If Kowalczyk could ski downhill reasonably well, would Majdic have skied away with this one so easily?

Here’s a look at the difference between the two semifinals: 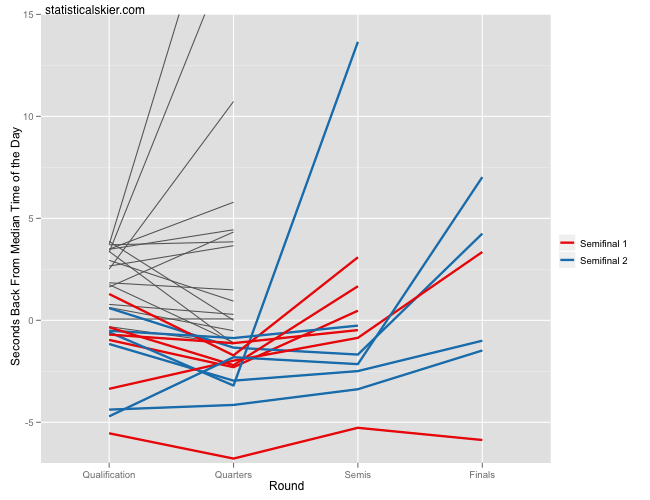 Semifinal two was generally faster, if we ignore Majdic.  The semifinal two skier way off the back was Anna Haag, who’s not particularly known for her sprinting. 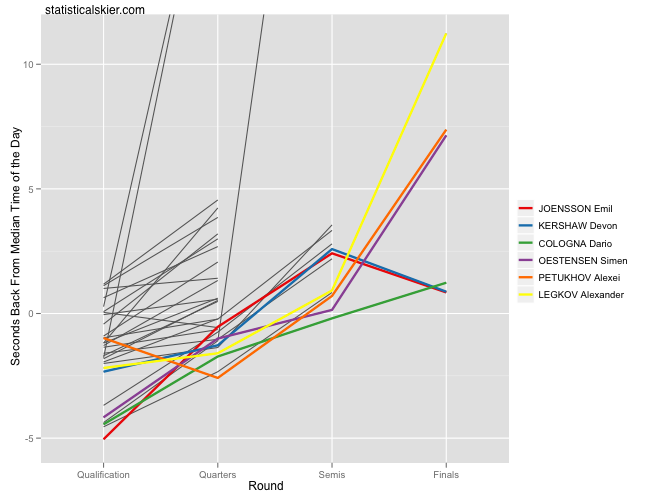 I’ve actually zoomed in on this graph somewhat, so several of those grey lines continue further up off the chart.  They belong to Jaks and Kummel (quarters) and Newell (semis).

Again, with the more tactically inclined men, the heats became progressively slower as the day went on.  (Or maybe they’re just not as fit as the women!)  Oestensen, Petoukhov and Legkov really fell off in the final, while Jönsson and Kershaw might have benefitted slightly from slightly slower efforts in the semis than Cologna.

Once I’ve acquired a larger collection of these sprint race data, it’ll be interesting to look for patterns.  I’m becoming curious how often it’s beneficial to have even a single slowish effort on the way to the final.  It’s one of those things where it’s obviously beneficial in real life, but the question is whether we’ll be able to actually see it in the data.

Here’s how the men’s semifinals shook out: 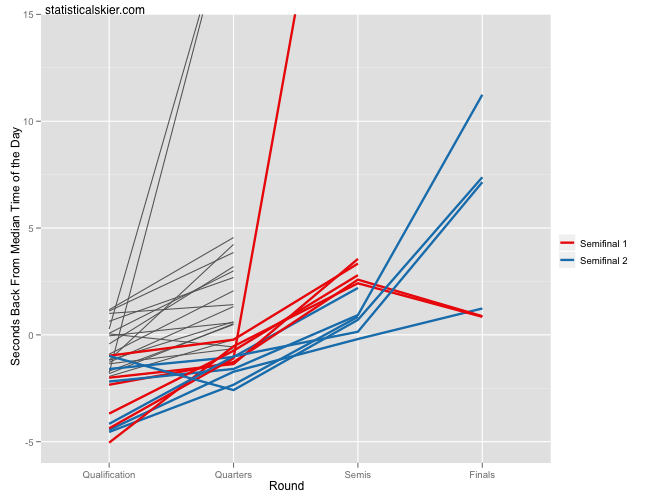 Like the women, semifinal two was faster.  Newell (semifinal one) was actually close to 30 seconds off the median time in his semifinal due to another crash, but I’ve zoomed in on this graph as well.

Big Smiles Down East in Rumford