This Saturday l did the Pre-Loppet, the race which uses the first half of the City of Lakes Loppet course. I started really well and found myself in the front for first half a K or so. Then I let two skiers ahead. My goal for this race was to control my technique and try to be more efficient. I tried to follow Ahvo’s advice from TC champs “not to push the glide”. When I thought about this, I realized that previously I was trying to glide as much as I could and that made me be completely above the ski during the glide, with the hips behind and not forward. It is very difficult to do anything from this position but just pushing upwards. So in my previous races I often found myself kind of “stuck” – I was working had but was not really going fast and could not keep up with other skiers. So this time I tried to change something. Not sure what I actually did, but it definitely made me faster than last Sunday. 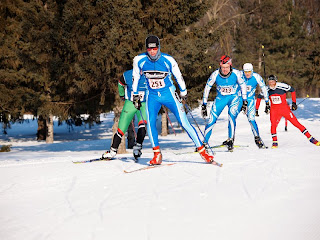 The whole race I was going 2-4 in the pack. The hills were surprisingly easy for me, it felt harder on gentle uphills and flats when using v2 or v2 alternate. That’s strange because on rollerskis I had it the other way round.
The pace went up in the end of the golf course when Derek took the lead. When we reached the lake Derek went back to 3rd position and I was going 4th. In the woods just 1K to the finish the first two skiers began to break away. I felt I could go faster, but the trail there is so narrow that there was no way for me to go around Derek. When we came back to the lake I passed Derek and was surprised to find how much I had left. I wished the first two were a bit closer, but was only able to finish 3rd. Anyway, I am definitely having progress and it is almost 2 months of racing left.