Continuing on from earlier today, we’ll turn to the North American women’s results from Saturday’s classic race in Beitostølen, Norway. As before, we’ll start with just a rough look at FIS points: 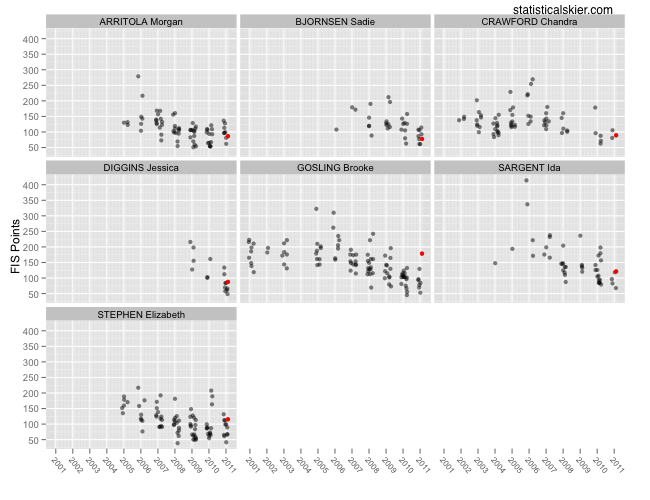 Once again, I’ll repeat my caution about how seriously these folks may or may not have been taking these races, having just arrived back in Europe. Clearly, Brooke Gosling didn’t have a spectacular day, and probably neither did Liz Stephen or Ida Sargent, but other than that nothing really stands out.

Several of these ladies haven’t done a ton of distance racing in Europe, so the data’s a little thin, but we can get a closer look at Arritola and Stephen’s races using percent back difference plots: 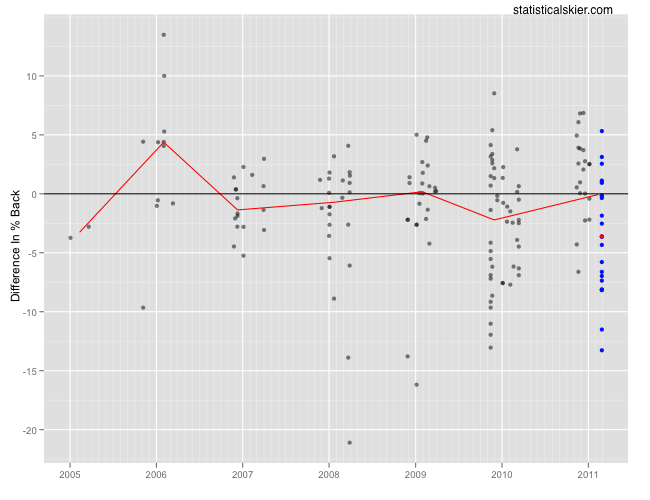 This strongly suggests that Arritola had a particularly strong race on Saturday, which is nice to see. Recall that the red line tracks the median for each season and Saturday’s race is in blue, with that race’s median denoted with a red dot. That race was quite a bit better than her races against these same folks earlier in the season.

On the other hand, the graph for Liz Stephen isn’t so rosy:

This looks about in line with her results against these particular skiers earlier this season. But all of this appear to be a bit of a drop-off from last season.

Again, I wouldn’t necessarily read a huge amount into a sub-par race in Beitostølen, since many people seemed pretty up front about using these starts as tune-ups following the travel over to Europe.