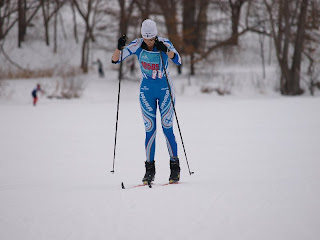 I love that the City Of Lakes Loppet ski race continues to get bigger and better. The Twin Cities is a tough market to promote sports in – physically pulling off a point to point urban race, getting people to show up for all of the many events, and getting media coverage… Good job, John Munger and your 1000 volunteers!!!!

A year ago right after the Nordic Spirit I was feeling pretty burned out. I actually considered skipping COL, Mora and the Birkie but knew I’d be disappointed in myself if I didn’t finish the season so I did them. This year, I’ve definitely had some emotional (and physical) highs and 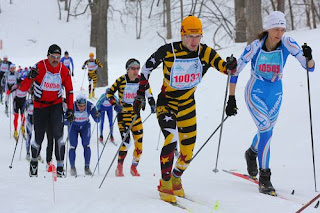 lows but for some reason I’m having more fun the more races I do. The best yet was City of Lakes on Sunday. I did the classic course which I really like – fits like a glove.

Sat. night I put on VR40, as recommended by Swix but driving to the race early Sun
day morning it was 29 degrees (22 had been predicted at that time)!!! I knew it could be a tough kick day. I ran into Kevin Ivens (racing with 2 broken ribs!) on the shuttle bus so we tested our skis along with everyone else. VR 50 seemed to be the consensus of the Swix users so I put some on. My kick was not great but my glide was good and I knew a lot of the hills were either gradual enough for the kick I had or steep enough that I’d be running anyway so I called it good and went to the start line. But I still 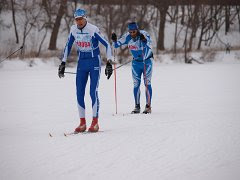 had a lot of angst so right before I entered the start area I added one more short layer of V50 – the ‘panic wax’ – and did not even test it. I started next to Hilary Patzer on the right side but never saw her once the race started. My start was not the greatest so I passed quite a few folks and finally settled in with Brent and just behind Katherine Himes. Brent has not been getting a lot of training in (too much work-related travel) so I jumped ahead of him and tried to stay with Katherine. On the second leg of Wirth Lake I 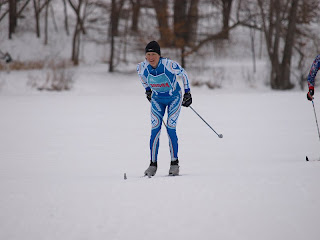 noticed she was kick double poling. I thought that was a bad sign for her but a good one for me so at the aid station just off the lake as she slowed for a drink, I skipped the drink and took off, hoping I could put a little distance between us.

This year the course took us through part of the flower gardens which are fun. Soon we were on the overpass above I-394 and I knew my favorite part – the lakes – were just ahead. The course was very fast and my kick was perfectly inadequate (Not enough for great kick but as much as I wanted for this race), allowing nice glide. Throughout the race I could see Josi and
everytime the course did a 180 turn, I could hear her cheering for me so I knew she was aware of where I was. I thought it would be nice to catch her but she felt out of my reach so I decided not to blow myself out trying to catch her but just kept the pressure on. As we 180’d onto Brownie Lake, Brent called out to me that I was safe – meaning that neither Katherine nor any 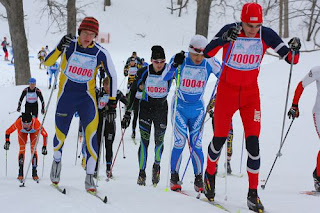 other women were close. Thank you, Brent! Coming up the boulevard to the finish was fun because my daughter, Claire, and her friend, Emily, were there to watch the finish. I had given them cow bells to cheer with and it was so nice to have Claire there as I was announced as the third woman, 49 seconds behind Josi. Then the race organizers pulled me to the side with Hilary and Josi and they did an awards ceremony on the podium with flowers. It was pretty cool for an old lady like me to experience the illusion that I’m a young hot shot skier. I doubt I’ll ever share a podium with the likes of Hilary and Josi again so I’ll tuck the good memories away and get ready for Mora. 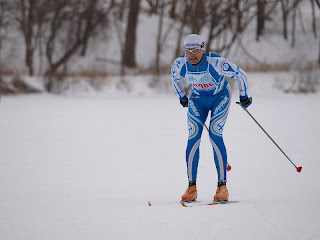 Andy: 3rd, Masters Division
Pics on Lake all taken by Tom Stuart – Thank you, Tom. And woods pics of Cheryl and Andy & Dave from Skinnyski.com