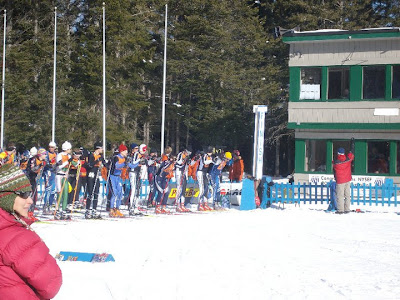 (Start of the 50k Free at the Lake Placid Loppet)
It was a epic weekend for all of the members of R.N.R. The senior team made the trip north to Lake Placid to take part in the Lake Placid Loppet. The junior team headed east to take part in the final Junior Olympic qualifier in Old Forge. After breaking out the new suits at the Super Tour two weeks ago the rest of the state is fully aware of who is hunting them down !
For the senior team Lake Placid has become a second home this winter as we have been in Lake Placid three out of the last four weekends, and are starting to contemplating buying a house to set up winter residency, well maybe not a house but at least a snow fort! Until that happens we have found a home away from home at the High Peaks Guide House ! Brian Delaney the owner of High Peaks is a vital part of the Nordic community not only in Lake Placid but across the state as he has dedicated his shop to being one of the best in the country offering a world class selection of equipment, stone grinds, and information. He also goes out of his way to sponsor all events in the area and now offers lodging at the guide house. Click here to see some pictures and details on the property. http://highpeakscyclery.com/articles/high-peaks-vacation-house-pg101.htm
Having a home away from home helped the senior team gather some impressive results at the Loppet. I was lucky enough to get off to a good start and led the race through about the first 5k I knew that the jacked up old man was behind me as well as last years winner Jake Hollenbach so after getting out to a good position slowed a little to try to get them to take a little pull, as anyone who knows Duncan well knows he is at home out on Porter Mnt and letting him get to the front was probably not the best idea as he took off as if he was shot out of a cannon, I was able to hang on to him and Jake for a little while but they ended up skiing away leaving myself and fellow New Yorker Mike Wynn skiing together for the next 20k, it was nice to have someone to ski with as we had a gap over the rest of the field after the first lap I was able to ski away from Mike and hold on to 3rd place. Chad and Marty were in the chase pack for the entire race with a bunch of other guys and both had strong races. Marty was able to rally over the last 5k to move up a few spots. Chad and Marty went 1,2 in the 25-29 age group and finished 12th, and 13th overall. Derrick decided to skip the 50k and race the 25k race. He was able to hang on to 4th place in his 18-24 year age group which was won by Olympian Wynn Roberts. Congratulations to everyone who raced the 25k and 50k races this weekend. The Lake Placid Loppet course is no joke and anyone who competes is pretty freaking tough! In saying that the toughest man out their had to be 81 year young Lenord Robinson who did the 50k classic, he competed in the 1st loppet 29 years ago and gid willing will compete in the 30th anniversary race next year! 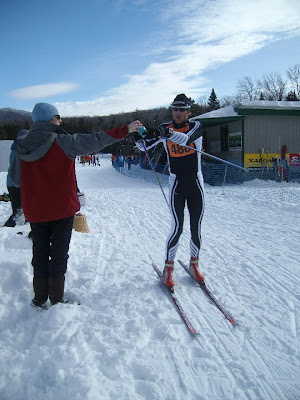 (Jason Getting a feed) 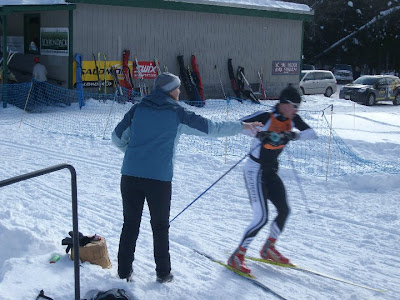 (Chad and Libby with a clean hand-off) 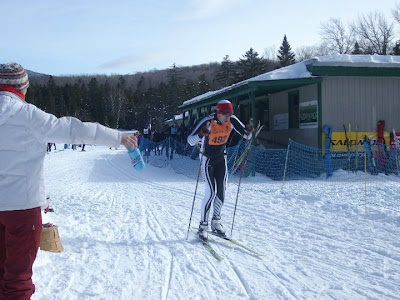 (Marty not looking like he wants a drink this time around)
While the Loppet was taking place the junior team headed to Old Forge to race in the last JOQ of the year. Coratulations to Reed for winning the J1 boys race and having the fastest time of the day! The rest of the crew also had great results with Alyssa and Margot taking 3rd and 4th in the J1 girls race ! Katie and Keena also had good races competing in the J2 race and taking 5th and 8th ! Dylan, Mike and Eric also where in the J1 race and skied to 5th, 12th, and 14th respectively. Dylan had a great race finishing 4th and securing a spot on this years Junior Olympic team. Gavin and Marco were in the J2 race and skied to 4th and 7th place. Gavin and Eric are in a tight fight for most improved skiers this year. Eric has established himself as one of the top skiers in the state while Gavin has come strait of the Alpine hill to be a force not only in the J2 ranks but across all age groups ! It’s pretty impressive to have someone skiing so well his first year competing in nordic and with some hard work could become a real forge within the next two years! 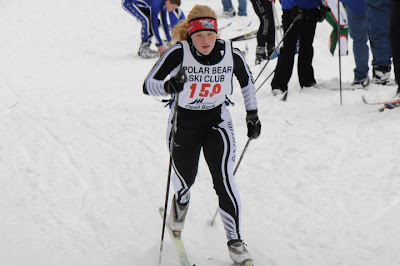 (Alyssa striding out of the start) 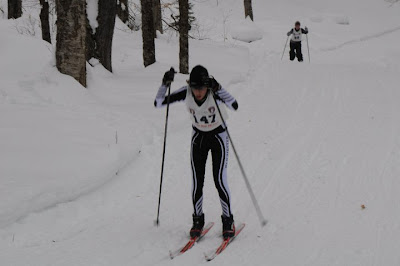 (Marco getting after it) 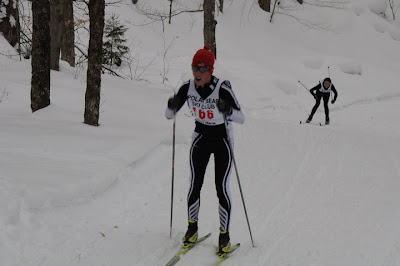 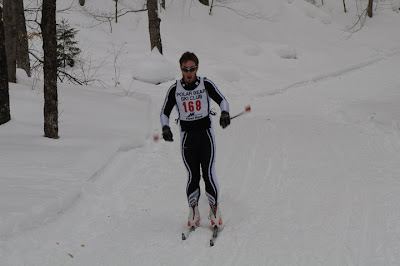 (Mike getting ready to unleash some power on those poles)
Not to be forgotten Steve decided to head south to the Art Roscoe Loppet and try to get the elusive victory that has escaped him the last two years. He was closer this year than ever but fell victim to the finishing sprint and finished in 3rd. It’s always a hard game to play in a mass start of when to make your move but I think he has learned to drop the hammer a little earlier and lay it on the line instead of leaving it up for a spring. I’m already looking forward to seeing what happens next year as I know he is going to be looking for the win again!
Next up for the juniors is the Section Five race this weekend ! I wish them all the best of luck and can’t wait to see what happens!
! 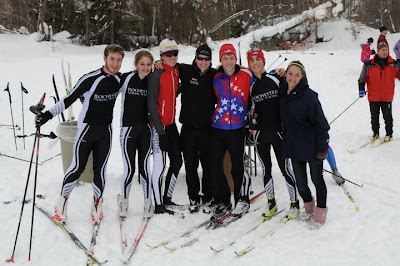 (Some of the Junior Team all smiles after the race!)