What a day! The Vasaloppet does seem to be our race. We’ve accumulated a huge herd of horses and a good number of wreaths over the years, and Sunday saw some significant additions. It’s great to see everyone skiing so well and having all that hard work pay off. 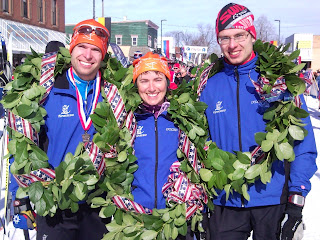 35k skate men’s and women’s champs and 42k classic men’s champ
You’ve already read Nate’s account; I’ll just add a note of my own. I’ve always loved doing the Vasaloppet. Aside from getting some pretty good results in 30+ years, there’s something about the friendliness of the small-town atmosphere, the chiming of the bell pulling you across the lake, the mainstreet finish, the shower and the lunch afterwards (except maybe for that baloney sandwich).

So it’s with a certain amount of dismay that I recount this aspect of my race. I had skipped the first food stop, so I wanted to make sure that I got a good feed at the second. We came into it fast, however, and, as sometimes does happen, the cup of liquid that was pushed out to me, instead of ending up in my mouth, explodes all over my face and my glasses.

When I open my eyes a split second later, I realize that another of the volunteers has accidentally backed straight ahead of me into my path. I’m still going at a good clip, she realizes I’m coming straight at her, I lurch to the left, she moves in the same direction, we both shift to the opposite direction, and then BAM. I reach forward to grab her and hold her up, but just end up flattening her. Right over her I go, one ski on each side of her body. Amazingly enough, I don’t end up on top of her. In fact, the whole thing doesn’t even slow me down (which is a good thing because I’m doing my damnedest to hold on to Ahlers and the pack ahead of me).

So, to the volunteer, whoever you are, I do apologize, and I really do appreciate your being out there for us. I’ll be back again next year, and, if I do encounter you, I promise it’ll be in a much more friendly manner. 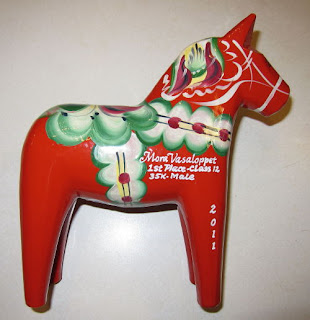 (My wife keeps wanting me to bring home one of the pretty blue ones. Sorry, Paula.)

The Feminist Movement In Marathon Times

Canadian Gillmor Puts Down Rifle to Race in Estonia