A reader sent me an email over the weekend regarding the discussion that’s popped up over the fact that women compete in far shorter distances than the men in cross country skiing. He suggested that looking at men’s and women’s road marathon times (running) might be interesting.

I did him one better and grabbed the world record progressions for road marathons, half-marathons and 10k’s as compiled by the Association of Road Racing Statisticians. Here they are, expressed as the percent back from the men’s world record at that time: 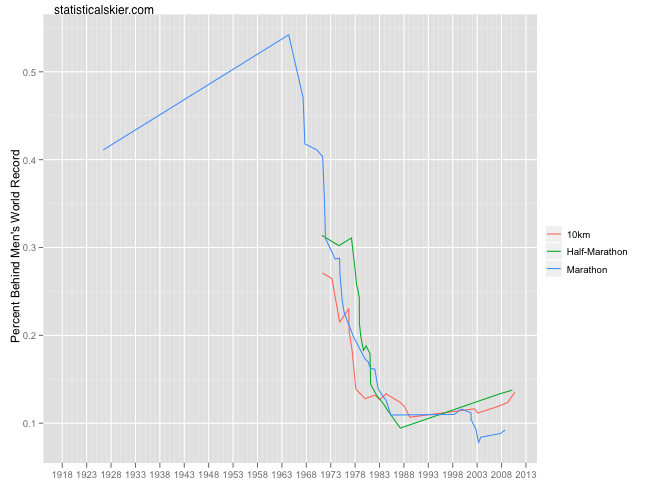 Do not be surprised that these lines sometimes bend upward; if the men’s WR drops that’s the equivalent of the women’s WR falling somewhat further behind the men’s. So we’d expect these lines to bounce upwards on occasion.

Much of what we see here is unsurprising, of course. Once you actually allow women to compete in an event, they may start out really slow, but they’ll make pretty darn rapid progress.

I was surprised that all three distances appear to have largely stabilized at around 10% behind the men’s world record. More recently, the women’s marathon times dropped a bit suddenly starting around 2000. The half-marathon distance must get more attention with the men or something; the women set a record back in 1987 and then again in 2007, but nothing in between.

So how does this relate back to our skiing discussion? Several things. First, discussions about what distances the women ought to be skiing should acknowledge that however fast they might ski a distance right now, they’re likely to improve on that once you actually let them ski it. Someone arguing in 1972 that holding women’s marathons was logistically too difficult because they ran them 30-40% slower than men would be making precisely this mistake. I doubt that the current female World Cup athletes are likely to make nearly that much of a step forward if they started racing 50k’s, but surely they’d get better at the distance over time.

Second, a 10% difference in time isn’t very big. Now, I think it’s likely that if we could plot a similar graph for skiing, we’d see the values start to level off a bit higher than this, maybe 15-20%, since skiing revolves more around upper body mass, which might work against women somewhat. But assuming you want the men’s and women’s races to be roughly the same amount of time, either for TV or to create equivalent physiological tests, you’d probably be better off shooting for having the women race around 85% of the men’s distances or so.