This will be really short and sweet, so here’s the graph: 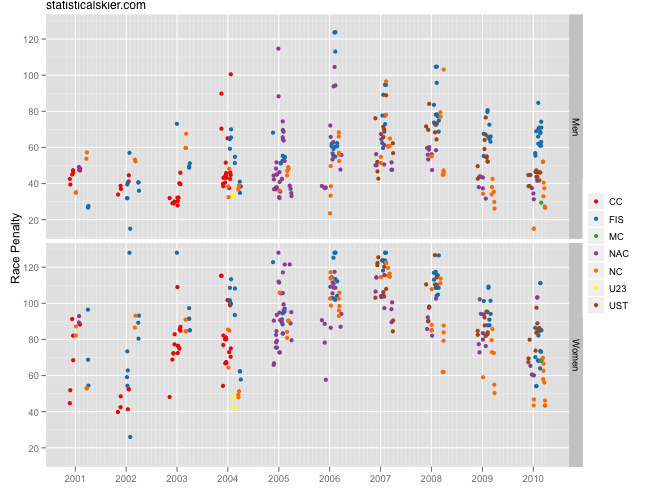 So clearly, this only goes back around 10 seasons (and doesn’t include the races from this season).  Reconstructing the FIS points for non-zero penalty races pre-2000 involves a ton of work, as the points don’t appear on the results pages of FIS.  So that’s a project for sometime in the indeterminate future.

Personally, I was totally surprised to see this amount of variation in race penalties in such short time spans.  Here’s a (speculative) story we might tell based on this graph:

Leading up to the 2002 Olympics in Salt Lake, we had a bunch of World Cup races in North America that drew European skiers (and the faster North American skiers) out of Europe.  This means they were more likely to do other races while they were over here, creating low penalty races.  Post-Olympics, this phenomenon ended and we saw race penalties rise steadily.

Beginning in 2004-2005, Canada began hosting World Cup races, in part to prepare for the Vancouver Olympics.  After a few years lag time, this cause race penalties to drop again, as these high level races attracted more fast European and North American skiers back across the Atlantic to race.

Now, that was just me speculating.  For one, I don’t (currently) have much data before the 2002 Olympics.  If we did, and we saw the race penalties rising moving backwards from 2001, that might support my speculation.  Additionally, my trusted ski racing authority (i.e. my friend) tells me that this story is likely mostly bogus.

Then there’s the obvious problem with the fact that FIS changed the rules for calculating race penalties beginning in the 2008-2009 season.  They switched from averaging the middle three points from the top five skiers to averaging the best three points from among the top five skiers.  Also, FIS switched from using an F-factor of 600 for all races to using 800/1200/1400 depending on the type of race.  If my sources are correct, this happened beginning in with the 2005-2006 season.  So really, this might just be reflecting rule changes on the part of FIS.

But these rule changes (if my dates are right) would only explain some of what we see.  Penalties were rising in North American well before 2005, for instance.

Some other things that could be going on here include: strategic decisions of national teams (or individuals on national teams) to race more in North America or Europe or perhaps genuine fluctuations in skier quality.