I made a graph a while back for a post dealing with the concern in Norway about their men’s distance squad, and in a follow-up post I provided a version of the same graph for the Swedish and Russian men’s distance teams as well. I’ve decided that I kind of like this graph; it’s a handy way to look at big-picture trends for an entire nation over long periods of time.

Naturally, then, we should look at some other countries. Let’s start with men’s distance events: 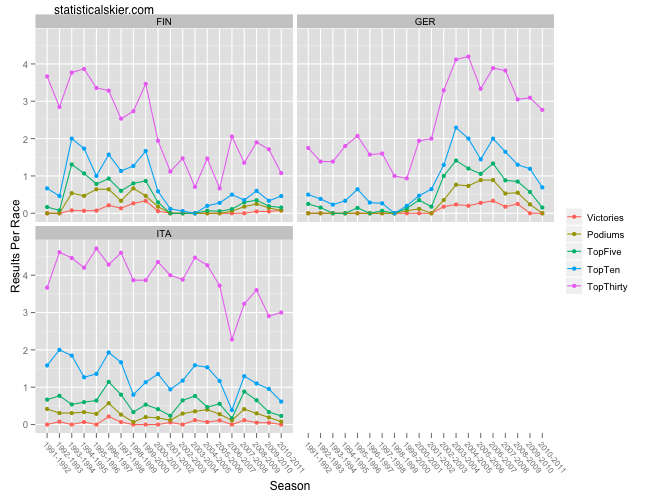 This is simply charting the number of results at various levels (top 30, top 10, etc.) per race, per season for each nation.

Nothing terribly surprising falls out here, but it’s a nice way to visualize things. The Finnish men pretty much imploded beginning in 2000-2001 and have only recently started coming back to life. The German men have had a phenomenal decade, at one point averaging nearly one German man on the podium in every single race, but with their big stars aging and retiring things have been steadily falling.

The Italians performance looks more steady than I expected it to. There’s a general, slight decline in the number of top 30 and top 10 results over time. What stands out most, though, is the massive post-Torino Olympics crash in 2006-2007.

As for the women’s distance skiers: 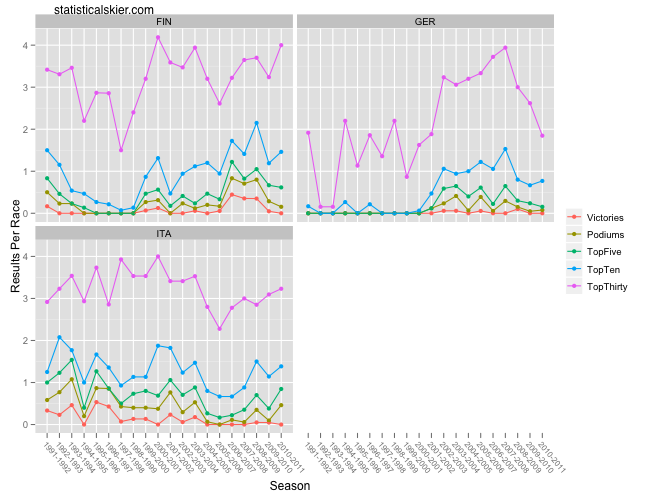 The Finnish women hadn’t reached nearly the heights that the men had by the late 90′s, so it’s not surprising that you don’t see the same crash in results. But instead you actually see their results start to improve in the late 90′s, take a small hit in 2001-2002 (probably from losing Virpi Kuitunen) and then mostly continue making small improvements. In fact, that bump between 2006-2007 to 2008-2009 is largely due to Kuitunen picking things up again.

The German women have seen a similar ride as their men, although they were doing even worse through much of the 90′s.

The Italian women had consistently strong results through much of the 90′s due to some obvious names, surely. (Although they, too, seemed to suffer from a post-Olympic crash in 1994-1995?) Things tailed off during the early 00′s but have picked up again with Arianna Follis and Marianna Longa taking up the slack.