After some wild racing this weekend, let’s take a step back and look at some of the top and notable performances again more closely. Starting with the women, here’s a graph showing the top six finishers in Saturday’s 15km pursuit (click through for full version): 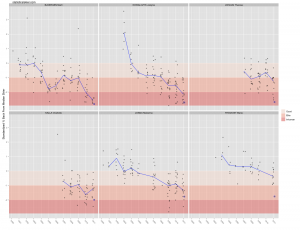 People keep pestering me about making my graphs bigger; so these will be bigger than usual. If you’re unfamiliar with this style of chart you can check here for a more detailed introduction. Saturday’s result is circled in blue and the blue line marks each athlete’s median performance over time. The values plotted are percent back from the median skier, adjusted for race format differences (mass start, interval, etc) and placed on a common scale, so that -1 corresponds to 1 standard deviation better than the mean percent back from the median.

Bjørgen, Kowalczyk and Johaug easily outpaced the field, placing their races firmly in the “Inhuman” zone. While Bjørgen obviously has mostly owned the region more than 2.5 standard deviations better than than the mean all season long, Kowalczyk and Johaug have had performances that strong this season, just not nearly as many. By this measure, Saturday’s race was actually Bjørgen’s best of the season and hence of her career. Johaug also turned in a race that was solidly her best of the season.

Both Kalla and Longa had what were for them fairly strong performances, but they just weren’t enough on that day to reach the podium. Maria Rydqvist has had quite the heartwarming story this season and capped everything off with a performance that was miles better than anything she’d managed before. A huge achievement, but that also means it’s less likely to be repeated. (One can always hope, though!)

Here’s the same graph but for the top men: 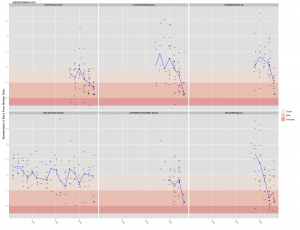 This race played out very differently, with a large group of skiers withstanding several strong attacks to all finish fairly close together. Indeed, the top 22 skiers finished within 30 seconds of each other. This means that most of the top twenty skiers had performances that, by this measure, easily qualify as ‘Elite’ (~1.5 standard deviations better than the mean) and with that many skiers fighting things out over the final few kilometers lots of factors other than physiology can easily play a big role. Most notably, the Swedes apparently had some bad luck with their skis.

Northug’s race was at a level that had been worryingly sparse this season for him. I’m betting he’ll be much more relaxed for the rest of the season and possibly more dangerous because of it. Ilia Chernousov is certainly a strong skier, but it took an exceptional performance from him to land on the podium. Hellner had a fairly good race for him this season, but was certainly hindered by his skis, as were his teammates.

Something must be said about Sergei Dolidovich, as well. Here’s a closer look at his graph, along with three others I found interesting: 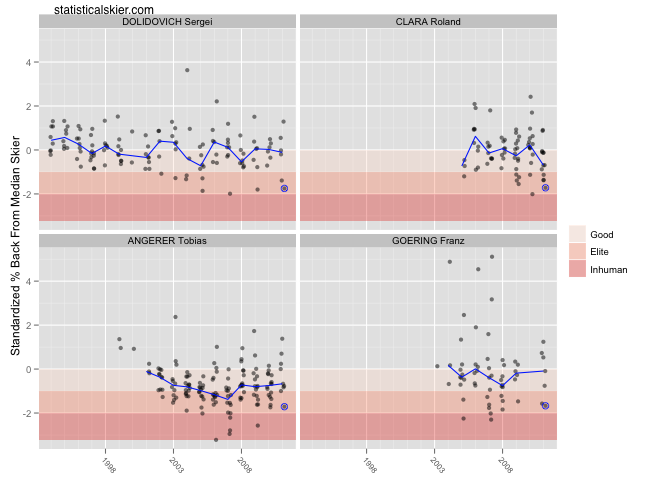 Dolidovich certainly had one hell of a race, particularly since he’s often struggled this season. However, he did finish 12th back in Davos, and every few years he’s managed to pop a great race at the upper end of the Elite range. Interestingly, the oft-cited 5th place at the 2009 World Championships is not one of those times; that result was only ~-.75 standard deviations better than the mean, but on that day that level of performance happened to be good enough for 5th.

Dolidovich’s race is an excellent example of the sort of “unusual” things that can happen in mass starts these days. If all you have to do to put yourself within 10-15 seconds of the podium is to put yourself solidly in the top 20 for much of the race, a lot of unpredictable stuff can play out over the final few kilometers. As I suggested to a commenter yesterday, if the Swedes had had better skis, if Cologna hadn’t been tripped up late in the race, if Harvey’s legs hadn’t suddenly given way, Dolidovich may have been looking at a more “pedestrian” finish back near 10th. To put it another way, lots of World Cup skiers are good enough be in the top 20 on any given day. If the pack is going to let that many skiers be within striking distance of the podium, you have to expect to see some unusual names near the top simply because they manages to eke ~5-10 seconds out of the final few kilometers.

The other three guys here are just folks that also had fairly strong races, just for comparison.

Review of the 2011 "Dermatone" Birkie