Norwegian youngster Finn Haagen Krogh had an excellent weekend of racing at the World Cup Finals in Sweden recently. Here’s a look at his distance results (using FIS points) up to this point: 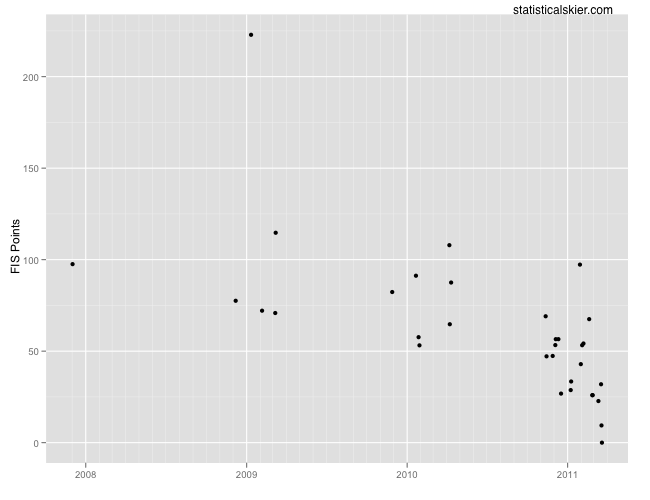 He was having a pretty darn good season even before this last weekend, having moved his typical race down to (or just below) 50 FIS points. He won the final stage of the World Cup Final and was 8th in the pursuit the day before, which give him his two lower than usual FIS points for the season.

As I’m sure the folks in Scandinavia are aware, Krogh has been skiing quite well off the World Cup circuit this season. In the Dec/Jan Scandinavian Cup races he finished in the top five several times (2nd, 2nd, 3rd, 4th; one of those was a sprint). Then in the early Feb Scandinavian Cups he didn’t fare so well, (12th, 14th, 18th, 26th; two sprints), but then by the end of Feb, he bounced back with a 1st, 2nd and 9th. He had good (but not dominant) performances last year at WJCs, finishing 3rd and 4th in the distance races and 12th in the sprint.

And this is the first season he’s appeared in World Cup races, apparently. Pretty impressive. The last thing I want to note about him is about his age, since he’s now technically won a World Cup race. (One could nitpick about the fact that his win came in a handicap start stage race, which often have top skiers racing to maintain position rather than to have the fastest time of the day. But he gets the 0.00 FIS points and all, so fair’s fair.) I looked up every victory (sprint or distance) in a major event (WC, OWG, WSC, TdS) by male skiers no older than 22 since 1992, and I found only 16 of them (including Krogh).

Keep in mind that I’m calculating ages by simply subtracting an athlete’s year of birth from the race date, so it’s entirely possible I’m missing someone, or possibly that one of these folks was actually older than 22 at the time. So I don’t mean this to be precisely accurate, but more as a general look at how often this happens and with whom.

Yes, there were sprint races back in 1996. I can barely remember how they were run though. Alsgaard’s incredible Olympic 30k back in 1994 is an obvious one; in fact I have this vague memory that he had actually just turned 22 before the Olympics that year. Unsurprisingly, Northug appears four (!) times on this list and only he and Anders Gloeersen appear more than once. Per Elofsson and Dario Cologna are also skiers who stand out as being fast at a young age.

Generally speaking, I’m less familiar with the Russians, although I know the names, of course.

The interesting game here is to ask whether Krogh will turn out to be similar to any of these other skiers, and if so, which one? For a sense of the variety, here’s a graph of the distance results (using standardized percent back from the median skier in WC, OWG, WSC and TdS events) for the men with a distance win by the age of 22: 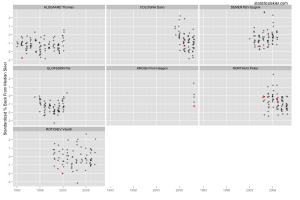 Each skier’s win (by age 22) is highlighted in red. As always, keep in mind the peculiarities of different ways of measuring performance. For instance, Northug’s two early WC wins look positively pedestrian using this measure. This is because both were mass start races that finished very close together, even for a ‘typical’ mass start race. In the case of his first win, I believe that the top thirty all finished within 20 seconds, so Northug didn’t ski all that much faster than the median skier in those races. And this is mostly in keeping with Northug’s strength and style as a racer. He doesn’t typically destroy the entire field like Marit Bjørgen does; rather, he out sprints everyone over the final few hundred meters of a race.