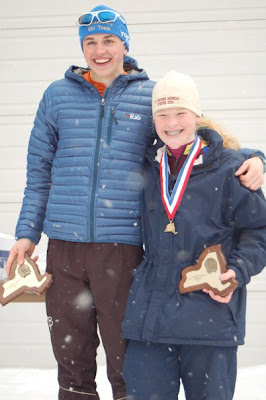 Yahtzee !
Congratulations to Aylssa the NY state champ! Alyssa left no doubt to who the best female skier was this weekend. She won the classic distance race by 19 seconds and followed that up by having the fastest relay split and anchoring the section five team including Margot to the relay state championship!
All in all it was a great weekend for all of the R.N.R athletes they not only represented their high school teams but section 5 in astonishing fashion.
On Tuesday the highlight of the day was Alyssa win! Hanna also had a great race finishing 4th ! Margot backed up her outstanding effort at sectionals to finish 12th ! Emmy also had a good race finishing 20th and rounding out the girls performances. For the boys Reed led the way finishing 4th with Eric continuing his excellent season finishing 5th. Adam just missed the top ten and finished 11th. Langton also had a great race finishing 19th. Gavin was on a way to a great race but was DQ’ed.
This is Gavin’s first year ski racing so many athletes would be happy just making it to states, but not Gavin. He is continually pushing his limits and I would of loved to see where he would of finished if he had not been DQ’ed but as we all know their is a learning curve when it comes to Nordic. The most impressive thing about the entire situation is that he did not get down on himself about the situation but only used it as motivation and layed the smack down on Wednesday posting the 2nd fastest relay split !
BOOOOOYAAAAA!
Gavin was not the only one doing work in the relay. Alyssa again posted the fastest time of the day on her section 5 team and led them to victory. Margot was also on the section 5 relay team and skied a great leg to help Alyssa grab the victory for the section 5 team. Hanna and Emmy raced on the HF-L relay team and had great races with Hanna posting the 9th fastest relay split and helping the HF-L team earn a third place finish in the Relay and securing the team state championship. Congratulations the the HF-L girls team on winning the state title!
The Boys were all on the same relay team with the exception of Langton who raced on the HF-L relay. I knew the boys had a chance to win the whole darn shooting match and when Gavin came in with a lead and tagged of to Eric things were looking good. Eric backed up his 5th place from the distance race with the 4th fastest relay split. Eric tagged off to Adam who hung on for as long as he could but tagged off to Reed in second place. Reed was unable to take over the lead and brought the R.N.R relay team home in 2nd. It was pretty cool to have all the boys race on the same relay team as they have put in a lot of hard work together over the summer and fall.
All in all it was a great state meet and congratulations to everyone who worked hard this winter!!!
Next stop Minneapolis for JO’s !!!!