That’s right, we’re taking my new biathlon plots out for a spin this week. The World Biathlon Championships kicked off the individual events on Saturday with the sprint. Here’s a look at the top men (click through for full version):

The top panels are plotting the standardized percent back from the median skier (adjusted for differences in race format), with Saturday’s race circled in blue. The blue line tracks the median performance for each season. The bottom panels show each athlete’s shooting statistics for each season.

Arnd Peiffer may not have been on some people’s radar, and indeed this race is noticeably better than what’s ‘typical’ for him this season, Interestingly, the three other good races he’s had this year have also been in sprints, so apparently he really likes the shorter distances.

The American men had, I think, a very strong day, even though they’re probably looking for results better than 26th, 31st, 32nd and 42nd: 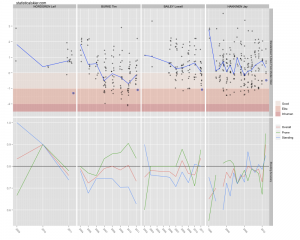 What a strong race from Leif Nordgren! In fact, by this measure each of these guys had their best race of the season thus far. The larger than usual field at World’s is probably padding these results somewhat, making them look at least slightly better, but I don’t think we should discount these efforts at all.