Pate NeumannMay 28, 2011
This is going to be one of those picture updates with a few words mixed in. Once again, I have left the blog go untouched for much too long! Now that we are back to regular training, hopefully I can get some pictures and words up here more often (that seems like a statement that reapears on this blog again and again!)
So most of these pictures are from a spring trip Emma and I went on in April.  April is the month of rest most skiers look forward to; it is a time to relax, take skiing off the mind and do some of the things you don’t normally get to do during the regular training year.
This year, my april included two weeks of full time work, and two weeks of full time play. Emma and I headed on a road trip west, to go find some snow to play in, and an ocean to paddle on! 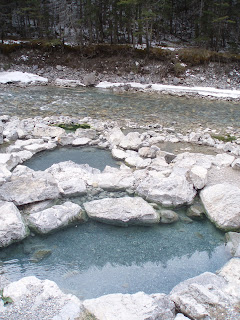 Our first stop was White Swan hot springs, just south of Invermere (about 2.5hrs from Canmore). They are natural hot springs, that have been build up to pool the water. The hot springs are right next to a glacier fed river, so it is a great spot for some natural hot cold hydrotherapy! 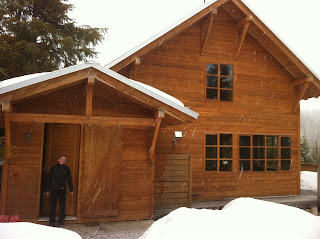 The next stop was Rossland. Rossland is one of my favorite places to go and play. Even in mid April, cars are still buried in snow banks and the skiing is incredible. 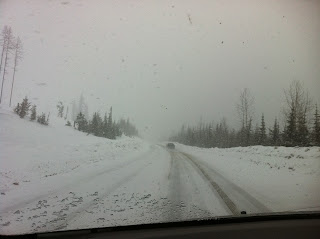 Driving up to the Nancy Greene Summit to snowshoe to Sun Spot Cabin for lunch. 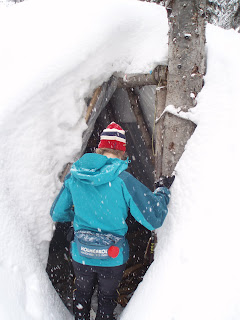 The start of the legendary 7 Summits trail is littered with cabins. You have to literally run right into them to find them as they are buried in meters of snow! 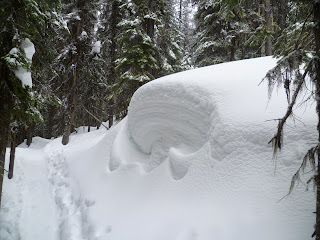 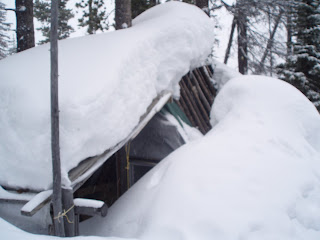 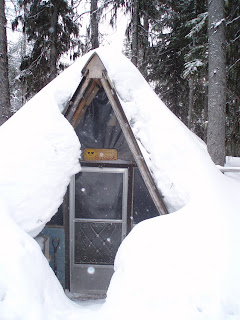 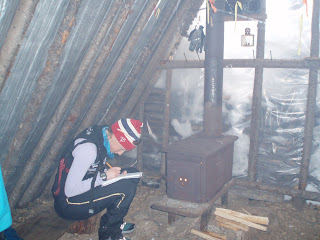 Lunch with a warm fire to dry out your clothes is nice treat on a long workout! 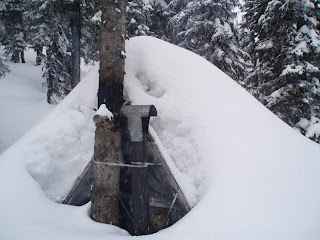 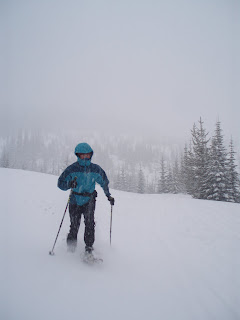 Coming back down to the car, still dumping snow! Visibility was pretty poor, so our attempt to get up on top of the ridge for a good view of the valley was pointless! 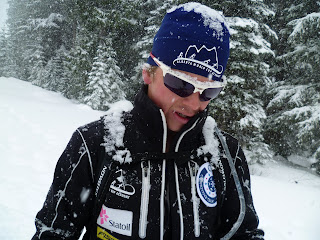 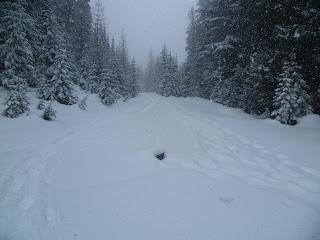 You can just make out the trail sign peaking out of the snow in the centre of the picture. 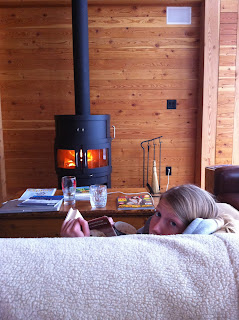 Returning to Valley View cabin after any type of physical activity is a real treat. The place was built to cater to the Apres Ski lifestyle. 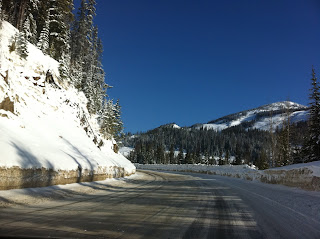 The day Emma and I decide to head out of town is crystal clear bluebird sky’s…
We packed up in Rossland and drove to Horseshoe Bay Ferry terminal just north of Vancouver to catch a ferry to Langdale. Our final destination was a house in Pender Harbour, halfway up the Sunshine Coast. 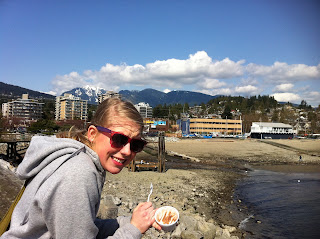 Killing time in Vancouver before heading to the Ferry terminal. Ice cream on the beach makes the transition from winter to summer official. We did it in a day! 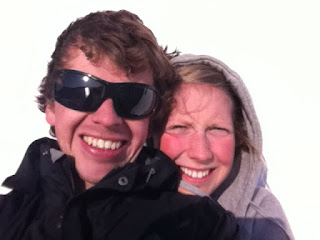 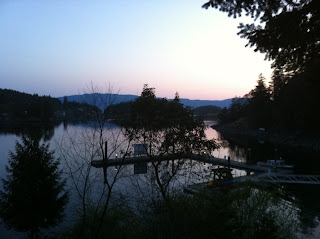 Arriving in Pender Harbour that evening.

The next few days were spend exploring the inlet and islands by kayak. 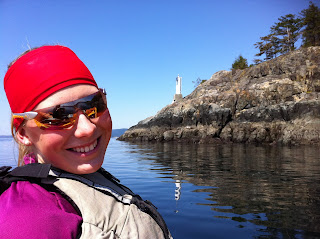 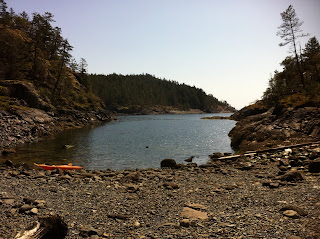 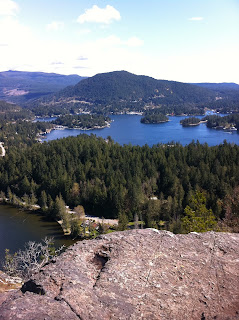 We also did a few small hikes up Pender Hill and Mt. Gordon for some spectacular views on the harbour. 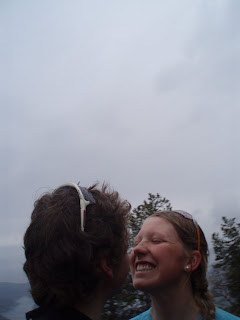 Unfortunately the clouds rolled in on Mt. Gordon, so you get a picture of us instead! 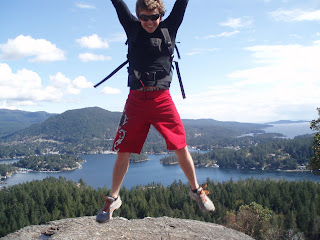 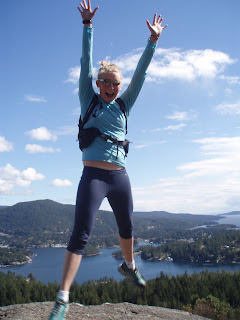 After a very relaxing few days in Pender Harbour, we got back on the ferry and headed to Victoria to go and visit with Emma’s grandmother. It was awesome to spend some time in Victoria. We had perfect weather as well, so we spent quite a bit of time running on the beach, exploring the harbours and looking at massive yachts.

Next is was off to Mt. Washington for the Snow to Surf relay race. 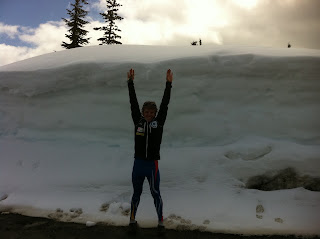 Once again we went from sun to snow. These were the snow banks on the sides of the road at the top of the mountain. It was cray how much snow there was!

One of the warming huts on the mountain. 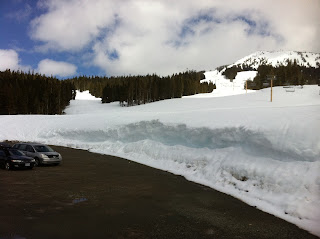 The base of the ski hill. Notice the size of the van compared to the snowbanks! 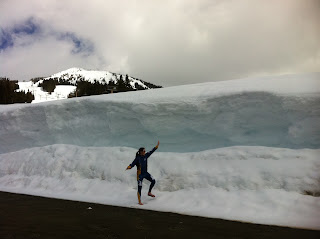 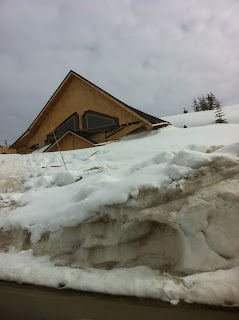 Houses under construction that were destroyed by the snow.
Unfortunately I don’t have any pictures from the race. But it was one of the coolest races I have done in a while. It is a relay race, with 9 people doing 8 legs. The race startes at the top of Mt. Washington and ends on the ocean in Comox Harbour. The first leg of the race is a downhill skier, who then tags off to a cross country skier (me), who then tags off to a runner, who tags off to another runner, who tags off to a mountain biker, then a kayaker, then a road biker and finally to a pair in a canoe who paddle to the finish line.
Our team ended up 2nd overall, less than a minute out. We had a solid race with no mechanical’s or delays so I think everyone was happy with the way things went.
That marked the end of Emma’s and my vacation and we headed back to Canmore immediately after the race. Emma went in for shoulder surgery the next morning and has been in a sling (recovering well!) since. Our return also marked the start of the new training year. After a week in Canmore to get things sorted out, the AWCA headed to Silver Star for our first on snow camp of the year. We spent seven days in Silver Star skiing in the sunshine and running in the heat down in Vernon. It was a great way to kick off the training year and bring the new team together!
We just finished up our baseline testing week in Canmore, measuring our current fitness levels carried over from last season and to set a standard for improvement over the course of the summer. I think everyone is happy with the early results. I know it has given me some good areas to focus on heading into the summer.
Our next training camp is in Kaslo, June 20-23. It will be a road bike oriented camp with one long 220km ride. We will be riding the “Silver Triangle” from Kaslo to New Denver, down to Nelson and back up to Kaslo. Last year I had just returned from planting before heading out on the camp. Lets just say trying to conquer 220km on your first ride of the season is not an easy feat. I am hoping that this goes a little smoother!
Pate