Being closely situated to Washington Pass offers a great opportunity to log some serious vertical during the course of an overdistance workout. While the early spring and summer months were filled with running and biking, I have slowly begun to work in rollerskiing as a training modality. The North Cascades highway offers the best pavement in the Valley for rollerskiing (though the specter of chip-sealing looms in the future) and the Pass itself offers a wealth of additional training opportunities. A few years ago we latched onto the idea of rollerskiing or biking the 13 mile, ~3000ft ascent to the Pass then taking a run or climb on the top to finish things off.

With the late winter we had there is still an abundance of snow in the higher elevations. For last Thursday Scott and I planned a rollerski up to the Pass, then a bootpack ascent up Spire Gully (~1500ft) to the base of South Early Winters Spire, where we would climb a popular multi-pitch route to the summit. The descent would be on skis to complete the day and fry the remainder of the leg muscles.

I started at the bottom of the highway around 7am and enjoyed almost no traffic for an hour and a half of the ski. At around 8:30am, when I had only a few miles left of the effort, the cars and RVs started rolling and I was soon on alert for oblivious, aging motorhome drivers who were sure to be more focused on breaking their fast with a nice can of Ensure rather than looking for brightly-colored “stick-wielding hippies” near the fog lines. 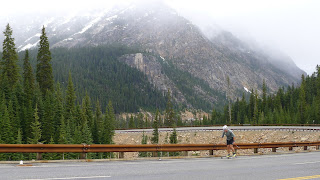 I met Scott, who had driven up to the hairpin with our skiing and climbing gear, and had a quick bite before donning warmer clothes (the clouds were gathering ominously) and ski boots for the trudge upward. A tremendous amount of avalanche debris in the form of haphazardly-strewn chunks of rotten snow made the first 500ft a bit tricky to navigate but we soon found a rhythm kicking in steps up the softening corn to the upper couloir. We stopped just shy of the top to dump our skis and put on more clothes; the wind and cold can be pretty nasty once you get through the upper cleft. We were starting to question our ability to make the climb; it had begun to snow on us by halfway up and we were concerned the route would be too wet to handle an ascent. But we decided to hike over and take a look. 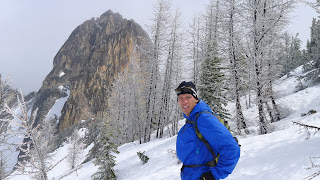 Unfortunately our fears were confirmed and we decided not to do the climb. The ski down was decent; the corn had softened enough to hold some good turns, and we called it a morning with 4 hours and ~5000ft to the workout. Another one in the books; we’ve already made plans to get ourselves back up there in finer weather to jockey ourselves up the rock when it dries out some.