I hope that everyone is reading this post in hind sight after having a fabulous July 4th holiday weekend!

Well…. this is it, the Eve of the “Big Day.”  The “Big Day” meaning, July 4th, or better yet, known in Alaska as “Mt. Marathon Day.”  Every year up to 40,000 people converge on the small town of Seward, Alaska to partake in Independence Day activities, the center spectacle being a foot race, Mt. Marathon.  This year will be the 84th running of the race and organizers claim it to be the second oldest foot race in the nation behind the Boston Marathon. 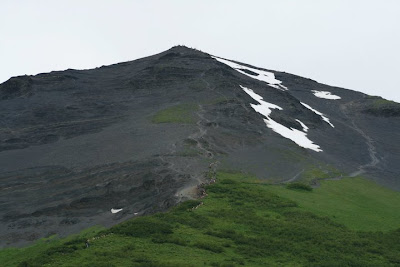 For those of you living outside of Alaska and not familiar with the race, this event is CRAZY.  For some reason, this race, beyond all others transcends fans interested in sports, or running for that matter.  Maybe it’s because of the Seward party atmosphere or maybe it’s because you have to race down cliffs and waterfalls but this race is notorious and in my mind, represents Alaska and it’s rugged ideals to a “T.” 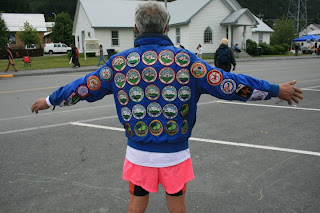 This guy, Fred Moore, has completed the race 40 times to hold the all-time record.  Here he is with the jacket and patches to prove it!

The race begins on Main Street in downtown Seward and runs approximately four minutes to the base of the “Mountain.”  Once there, the climb starts with a class five-esque scramble up some tree roots before settling into a consistent, steep grade.  Racers climb a total of 3022 feet to the summit before beginning a perilous RUN back down the entire 3,022 feet.  The top women climb up in 38 minutes and descend in less than 12, count them, TWELVE minutes.  People run onto main street for the finishing home stretch covered in blood and mud – usually with huge smiles on their faces.  The icing on the cake is that the night before, the organizing committee holds an auction for entrance into the crazy race and participants have been known to drop close to $2,000 dollars just to run uphill and downhill in the mud! 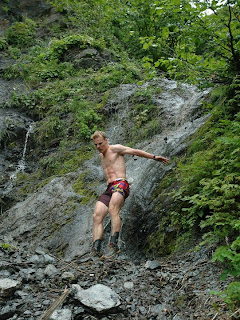 Friend and co-worked Eric Strabel is a beast on the downhill.  Check him out here, sliding down a waterfall!

Beyond the crazy nature of the race, this event has special meaning to me.  I’ve run the race three times now and each time I had a memorable experience to associated with the race.

2008 was my rookie year and I somehow busted out a second place performance.  I had gotten engaged two days before the race and our “Save the Date” magnet was from the finish line in Seward. This was my first experience at Mt. Marathon and I was hooked. 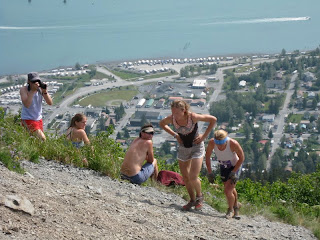 Then, in 2009 I had grand ambitions and extra incentive because my entire immediate family was in Seward to watch my race because my WEDDING was the following weekend.  The conditions this year turned out to be extremely hot and I entered the race slightly dehydrated.  I led until 4/5 of the race was complete and then collapsed of extreme dehydration and was taken directly into the Emergency Room that is appropriately placed at the bottom of the “Cliff.”  I know it sounds cliche but laying in the ER was where I had my epiphany that I needed and WANTED to try and make the 2010 Winter Olympics.  After taking nearly two months off to recover from my Mt. Marathon injury, somehow the following winter I landed on the start line in Vancouver. 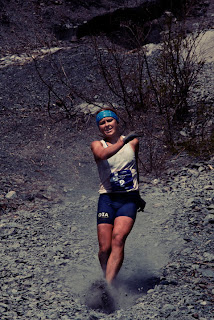 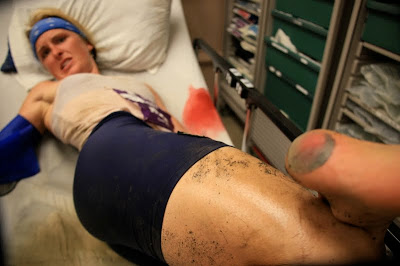 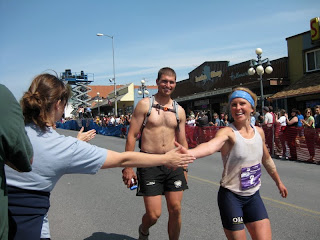 Much to the disgruntle of the Seward ER Drs I checked myself out of the ER to cross the finish line before checking myself back in (I promised them!) until my blood work had stabilized. Here I am walking down Main Street with my husband, Rob, long after the majority of the races had finished. 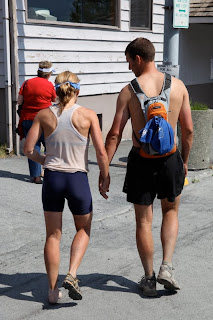 Only one week until our wedding! 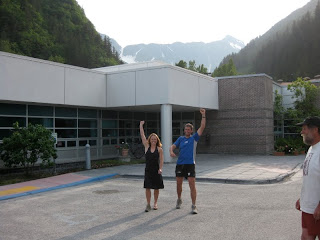 Success! Officially checked out of the ER at 8pm after an 11am race start…..

Last year, in 2010, I set a great pace to the top and had a two minute lead over race veteran, Seward hometown hero and six-time Mt. Marathon Champion, Cedar B only to blow it by getting passed on Main Street in front of 10,000 screaming fans.  Our ten second gap was one of the, if not THE closest race in Mt. Marathon history.  Last year’s loss had a particular sting when Cedar announced her retirement and I was bummed about the fact that I wouldn’t be able to race against the Mt. Marathon legend ever again.  Alas, her times will have to do! 🙂 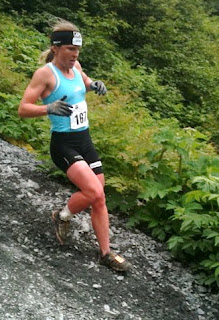 On the way down, still in the lead… 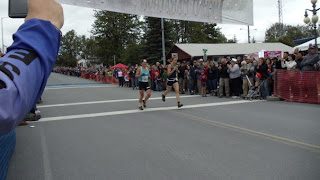 Here I am being passed by Cedar literally 1.5 blocks from the finish line

That brings me to this year, 2011 and TOMORROW. Every year I have grand intentions of training specifically for this race and specifically HARD for this race. However, each spring and early summer it becomes impossible to train specifically for Mt. Running while maintaining and prioritizing ski racing goals.  So much of my training consists of ski specific stuff such as roller skiing, glacier skiing, and strength training.  Sure, there is a huge amount of carry-over fitness. That’s what’s propelled me to two runner up finishes and the pain tolerance and ability to push myself into the ER.  Alas, ski training is not Mt. running training and I find myself going into this year’s race feeling under prepared.  Do I wish I had done anything differently? No, not really.  Skiing is my main focus and I am preparing to hit five consecutive World Cup weekends in five different countries in November and December.  I need to be in ski shape from the get-go!

That said, bring on Seward and bring on the race!  See you’ll down there!
Thanks for reading and thanks for your moral support. Have a great, safe weekend!
Sincerely,
Holly 🙂

The local Seward, Alaska paper posted this article titled, “Is this the year for Brooks?”  This article also has a run down of other female contenders.

After all this, if you’re interested in watching the race on the “Live Feed” (I don’t promise anything!) check out this link to the local news station, KTUU, Channel 2.

The Anchorage Daily News always has nice coverage of the race as well… check HERE for info.