With the modern chip timing tools used today ties should be fairly rare. They do still happen, though: 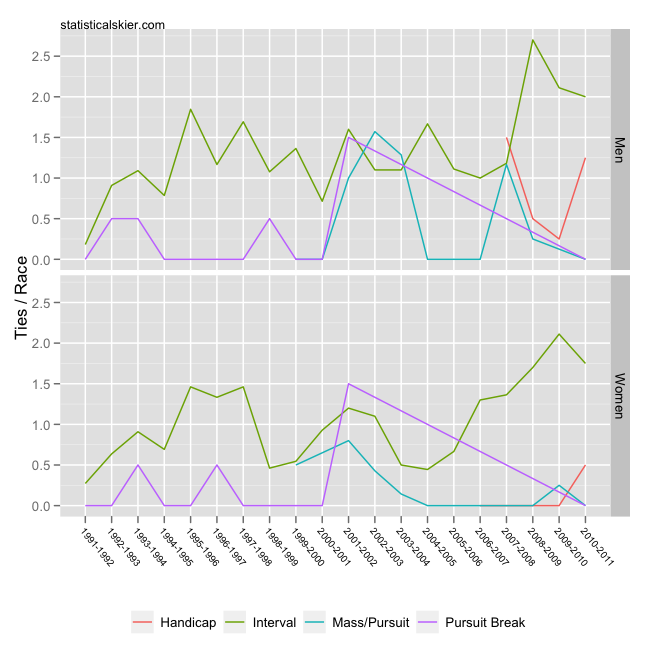 This shows the number of ties per race of each type for WC, OWG, WSC and TDS races for men and women. As we might have expected, there are considerably fewer ties in mass start style races. Amusingly, this is almost certainly entirely psychological. In a mass start or pursuit race you can see the person who’s going to finish with nearly the same time right there next to you! In an interval start race it’s harder to motivate to sprint the last 10 meters when there’s no one around. It shouldn’t be harder, but it is.

Don’t read too much in the Pursuit Break line. That format is really only used in stage races these days, and even then it’s quite rare. The seemingly big jump in 2001-2002 is not terribly ‘significant’, since that format was only ever used ~2 times a season for each gender. With such a small denominator, a small change in the number of ties can make the rate seem to jump a lot.

What’s more interesting to me is the apparent increase in the rate of ties in interval start races. The trend is more noticeable among the women, but the fact that the rates for both men and women have jumped up somewhat may be significant. I can’t think of a good ‘story’ to explain why this may be, though. It could always just be noise, of course, but it’s interesting to ponder…