After my six year-old camera finally called it quits a few months back it’s been difficult to motivate for blogging. Especially when you look at the smattering of Nordic blogs out there, pictures dominate. I don’t want the MOD blog relegated to the bottom of someone’s RSS feed because boredom sets in from reading entry after entry of text and no shiny happy photos.

SO…we’re back. I got myself a tasty little Sony digital camera with some video capabilities, and promptly threw it into Scott’s hands to shoot some film on a workout last week. 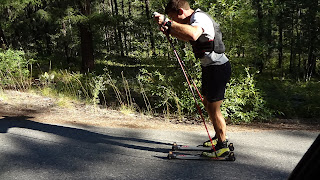 Without divulging company secrets I will say that we’ve been utilizing some tremendous training philosophy from a certain Italian running coach and the results have been great. Most of the focus has been on aerobic capacity – strength, power, and speed has never been a huge problem to face, but no one’s ever called me an endurance machine. With the help of our distant paisano, we’re maybe gonna change that fact. After four weeks of following a speed endurance progression that our Mediterranean friend set forth as a method he used with his marathoners, I re-ran a 1600m skate TT and dropped about 16sec off my time from early July. Positive results like that are just what we need to affirm we’re on the right track.

A few months ago Scott and Alison started working together to help prepare Alison for her 100-mile ultramarathon (this Saturday). On Monday Scott ran her through a second lactate step-test protocol, basically a Conconi test w/ lactates taken at every 2min stage and speed increase. The difference between this particular test and her last one, conducted in early June, was a complete dichotomy. I tried to copy the latest chart on to this blog but I’m rather inept in that department, so just take my word for it. Imagine the flattest line stretching out to the far right before shooting steeply upward as she passed threshold. She’s more ready than she’s ever been for this weekend’s race; I’ll be pacing her for about 20miles of it at different stages and hopefully won’t have to be chewing her food…