As promised from last time, a quick look at some similar data broken down by race length. I’ve filtered out the occasional “strange” race length, to focus on just the standard 5, 10, 15, 30 and 50 kilometer distances. The metric is the same: the median number of skiers within a fixed percent of the winner. However, we should be very aware in this case that the median is really nearly the raw data itself. How many 30k mass start races are there per season, anyway? It would be weird to have more than four, and you could only have two.

Here’s the graph for only the interval start races (click for full version): 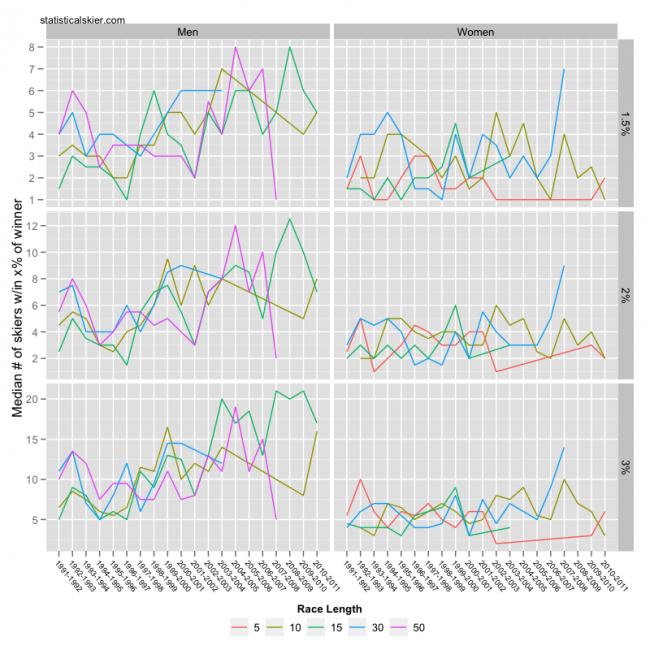 Notice that some interval start race lengths either didn’t occur in a particular season, or were phased out altogether. So the lines may behave strangely, or simply end. Also note that I omitted the smaller percent back values, as they are less useful for interval start races.

The apparent sudden increase in competitiveness of the women’s interval start 30k races, before they were ended completely, is entirely due to a single (and only) race in 2007-2008. So really, those numbers had been holding steady for quite some time. The men’s data displays its own volatility for the same reasons (single races of a particular length in a given season) but the numbers are all generally higher than for the women.

If you figure the men were seeing ~15 people within 3% of the winner, while the women have been seeing ~5 people within 3% of the winner, that’s a pretty major difference in practical terms. Again, think of it as a game of musical chairs. When the music stops for the men, there can be as many as three times as many skiers vying for a place to sit!

As I laid out in my previous post, I think this difference is mostly a numbers game (ha!). Namely, while 3-4 decades seems like a long time for women’s skiing to have developed, it really isn’t, at least compared to the cultural and practical infrastructure built up around men’s athletics over previous centuries. So if you don’t like this state of affairs, send some money to Fast And Female, be patient, and check back in 20 years or so. I’ll guarantee you things will be better.

Finally, here’s the same graph but for mass start (and pursuit) races: 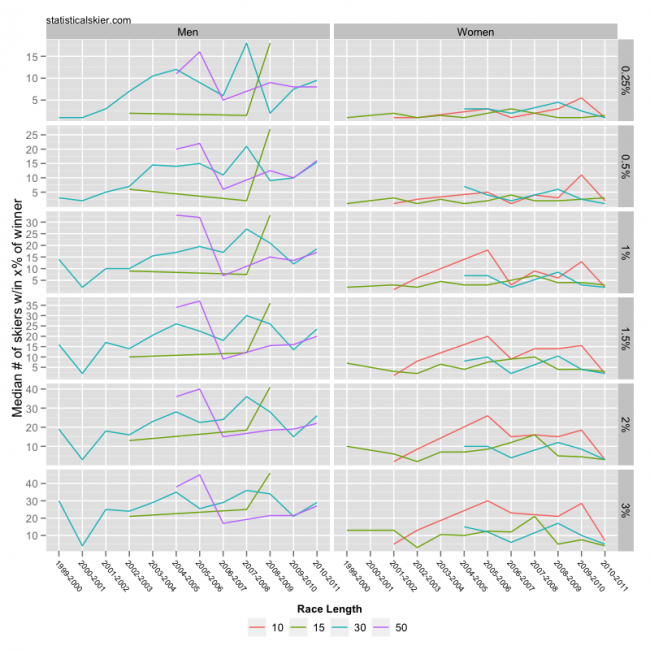 It’s a little hard to read much into the apparent similarities here. For instance, many of these distances occur only very rarely. So we should ignore the men’s 15k line and the women’s 10k line. Note that the difference at the 30k distance is still quite large, though.