Erling Jevne wasn’t the best skier during his era, having to compete with folks like Dæhlie and Smirnov among others. And he wasn’t even the best classic skier, most likely. At least, he was still mostly losing to those two guys even in classic races: 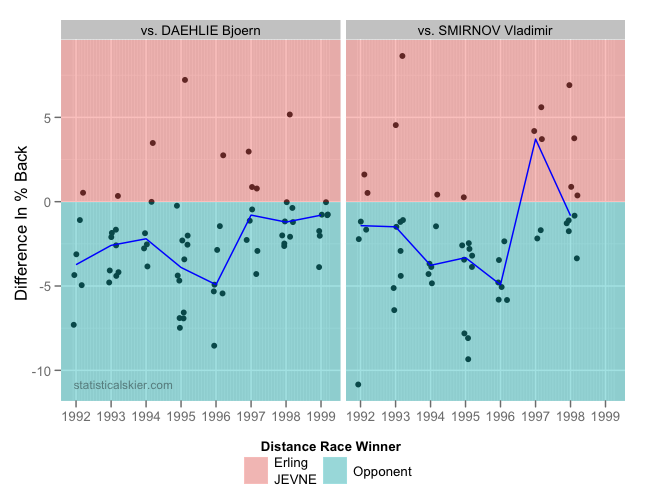 Jevne fared better post-1997, but Dæhlie always had at least a slight edge, and Smirnov only faltered significantly in 1997. Indeed, Jevne’s 1997 campaign was notable: 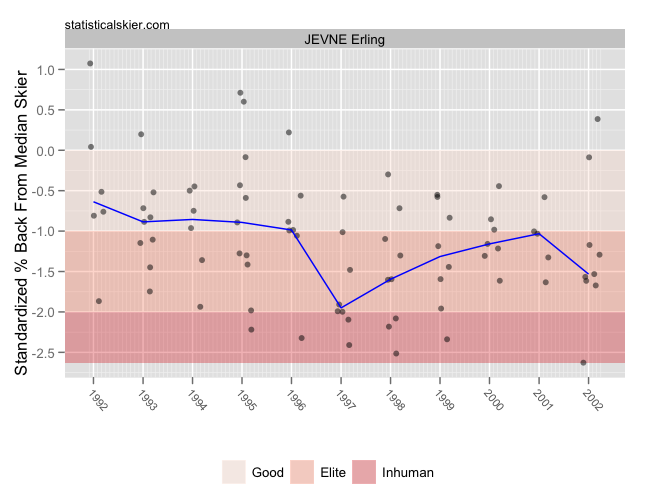 That’s a huge performance jump for the 1997 season. Of course, Jevne basically only skied classic races in 1997. He did one two-day pursuit, but that’s it. He’s one of the most lopsided fast skiers ever in terms of technique specialization. Among major international races, I have him participating in 68 classic races, 10 freestyle races and 7 pursuits (of the older variety, obviously).

Jevne’s 1997 campaign is impressive to me because it actually ranks near the top of the all time list for best distance race seasons in my database. Since he was such a classic specialist, he only did 8 WC/WSC races, but that included 4 second place finishes, a third place and 3 seventh place finishes. And of course, I’m not even scratching the surface of his role skiing classic legs for their relay team.

Maybe it’s not fair to lump him in with the everyone else, but purely based on the numbers, that 1997 season of his was nearly as good as some of the best that Dæhlie and Smirnov put together, and better than nearly everyone else.