Since we supposedly do statistics around here, the goal here will be to ‘statistically’ identify folks who specialize in longer distance races. By that I mean people who tend to ski better (relative to their own performance) in longer races. The fun part is to see whether the folks we single out match up with the people we would have thought of anyway. We’ll begin with the women.

The mechanics of this will largely mirror how I’ve identified technique specialists in the past, using mixed effects models. These are extremely handy modeling tools when you want to compare athlete specific effects. If you’re familiar with linear regression models, you can imagine doing a regression analysis on all skiers that investigates the effect of race length on performance. What we’d end up measuring is the average effect across all skiers. That’s not terribly interesting, or meaningful. Mixed effect models allow us to estimate a separate parameter for each skier that (hopefully) captures the effect of race length on performance for each individual skier.

Beyond that, I’ll spare you the nitty gritty, except to say that I included a handful of other variables in the model to attempt to control for some other differences in race types (technique, mass vs. interval, etc.).

Out of all the women with a reasonable number of major international distance races (at least 10), these are the ones with who have performed ‘significantly’ better in longer races: 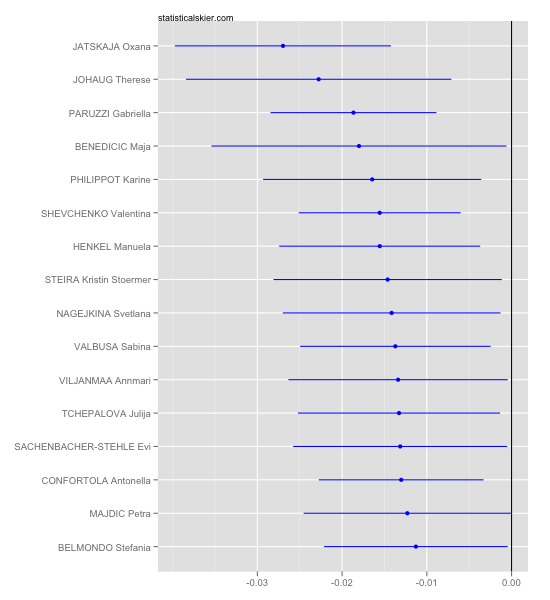 The more negative the value, the stronger the preference for long races. One of the reasons I like this kind of analysis is that it doesn’t just pick out people who are good at long races; it picks out people who are better at long races than short races. This means you aren’t just picking out the fast folks over and over again. There are plenty of big names here, but also some folks who are not dominant WC skiers. I’ve never hear of Annmari Viljanmaa, for example.

Therese Johaug floating to the top here probably isn’t a surprise, although it’s not like I’d count her out completely in a 5k. And I’m also not surprised to see three Italians here; they seem to excel at the longer stuff a lot of the time.

Who are some folks at the opposite end of this list? Along with a lot of people I’ve never heard from you’d find the likes of Vesna Fabjan, Ida Ingermarsdotter, Astrid Oeyre Slind, Katrin Zeller, Wendy Wagner and Natalia Korosteleva, who would all apparently tend to do worse in longer races.

The Right Tool for the Job: Goal Setting for Juniors