I haven’t done one of these in a while, so just for fun…

This time let’s compare two great female skiers from the 90′s (and early 00′s), Norwegian Bente Skari and Italian Stefania Belmondo.  Unlike with Daehlie and Alsgaard, things are little more balanced for these two: 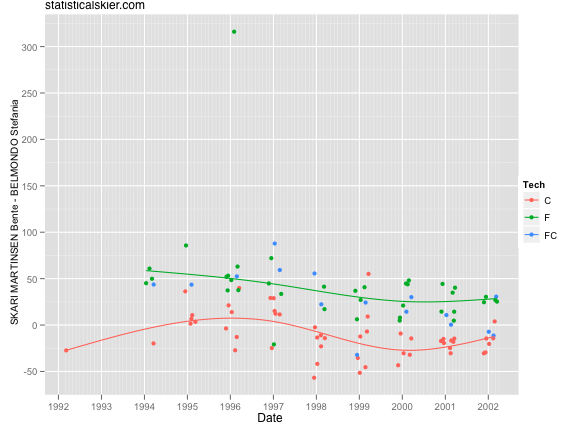 I grabbed the 105 distance races I could find where Skari and Belmondo raced against each other.  The y-axis is simply the difference in FIS points for each race.  A negative value indicated that Skari won and vice versa.  As before, the FC technique refers to pursuits, although in this case a handful of the more recent pursuits were run without a break.

Two things jump out immediately.  First, what the heck is up with that massive victory by Belmondo in a freestyle race in 1996?  Second, each skier seems to have a preferred technique, eh?

That weird race in 1996 is, well, weird.  And it’s not my fault, honest!  Here’s the link to the results on the FIS website.  FIS claims that this was a 10km skate race held in Seefeld, Austria on 02-02-1996.  They claim further that Manuela Di Centa won in a time of 1:29:29.0.  Hmmm.  If you look even closer, you’ll see that something is really, really amiss with the times.  Pay particular attention to the seconds part of the times.

Additionally, if the times were “correct”, ignoring the weird second recording, we’d have to believe that Di Centa, Belmondo and Vaelbe outpaced the field by six minutes or so.  Even in a 30km, that seems unlikely, but you never know.

It turns out that if you click through the links for each individual skier on that results page, you’ll find a reasonable looking FIS point value.  But you have to go through each skier one by one.  So here’s the same graph, but with this one race fixed up: 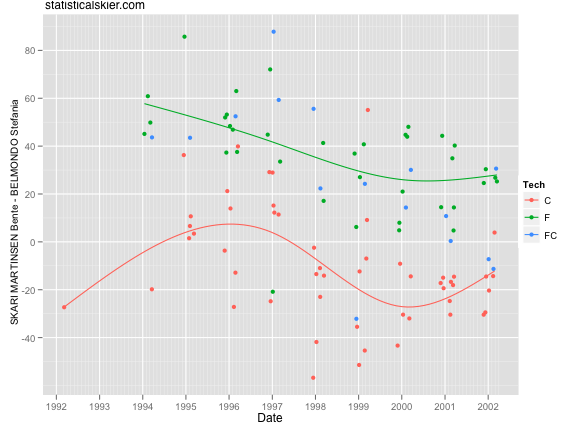 Much better.  Now, where were we?  Ah yes, Belmondo likes to skate, Skari likes classic.  Note also that Belmondo had quite an edge in the pursuits as well.  I’m convinced (although I have no hard evidence for this) that pursuits, with or without a break, are not equally dependent on your classic and skating abilities.  Certainly in the modern, continuous, pursuits the pace often so slow for the first half that you can get away without being a superb classic skier.  Basically, I think that always having the order go classic-freestyle pretty significantly weights the results towards your skating ability<1.

Another interesting trend is that the Belmondo vistories tended to decrease in magnitude over the years.  When it came to skating, perhaps either Skari was getting better or Belmondo was getting worse.

Another interesting race is that one lone classic victory for Skari way back in 1992.  My database doesn’t stretch back much past 1991-1992, so off the cuff I can’t be totally sure, but I think that was both Skari and Belmondo’s first World Cup race, at the ages of 20 and 23, respectively.