It’s pretty crazy to think about, but the 2011-2012 FIS racing season officially got under way last week with some sprint races in Germany. I don’t know much about the circumstances of the venue, but I’d love to know how they put these races on. I’m guessing artificial snow? Still, they claim to have used a 1.5km course, so they weren’t skimping on the length.

Technically, I suppose the season kicked off earlier in the summer in New Zealand. But this blog has a severe Northern Hemisphere bias.

The field at these races was basically only Germans. My main interest is in how Nicole Fessel did. She had a dramatically improved season last year, so I’m curious how she follows it up this year. So let’s look at how Fessel did in qualification versus some of the top skiers in this race that she’s faced before: 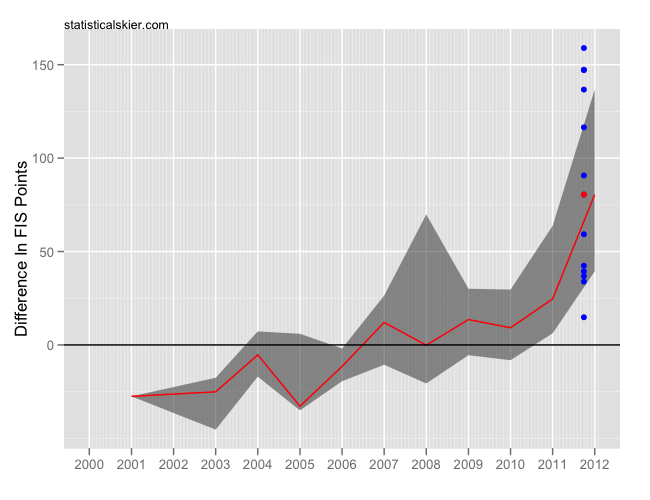 This is a re-worked version of some plots I was using last season. I’ve been refactoring a lot of my code, though, so things have been turned a bit upside down. This plots the difference in FIS points (i.e. qualification speed) between Fessel and other skiers in this sprint race that she’s faced before in the past.

Part of my code refactoring meant that these graphs are turned upside down. So now up is good and down is bad. The blue points are the differences for this season opener last week. They are all above zero, since Fessel had the fastest qualification time. The red line (and gray shaded area) track the equivalent values for match-ups between Fessel and her competitors in the past. Fessel was already basically always beating these ladies, and this race is no different. Based on this single race, at least, I’d say Fessel is in track to pick up right where she left off.

After a Year of Health Struggles, Nilsson Forced into Early Retirement