Pate NeumannNovember 3, 2011
November has arrived! We have been on snow for over two weeks, but we have had very little natural snow. Frozen Thunder has held up surprisingly well. Despite being a little icy in sections, the coverage is still good. The snow guns are out at the Nordic Centre, but they have only had a chance to blow a few hours here and there, so there isn’t much to speak of. 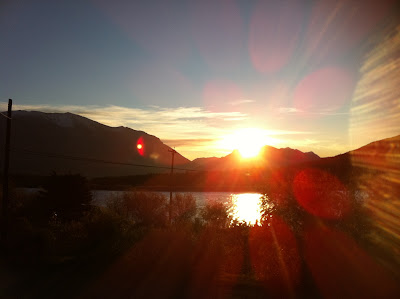 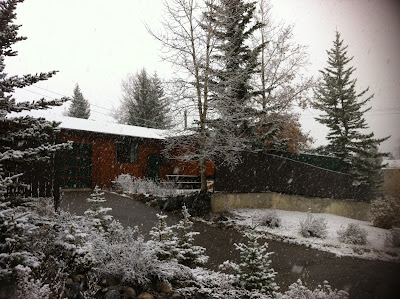 A little bit of the natural stuff. 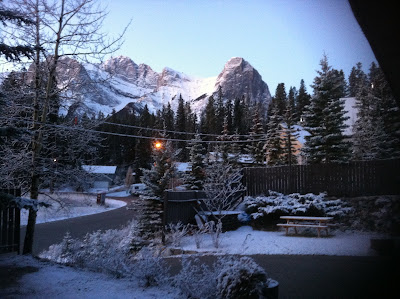 It is amazing how just a little dusting of snow can really freshen things up! 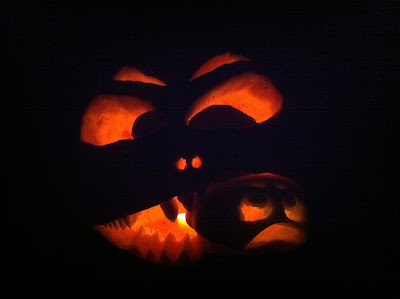 Halloween!!  This is the pumpkin Emma and I carved. I got to do the mini gourd being eaten by Emma’s big pumpkin. 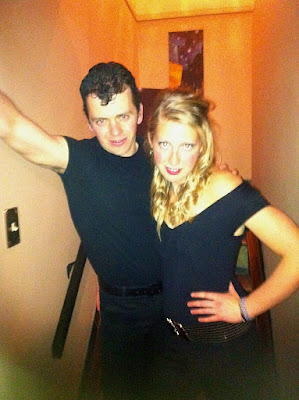 Emma and I dressed up as Danny and Sandy from Grease. We looked pretty damn good. 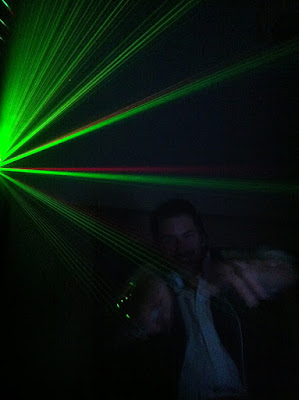 Russell Kennedy- The newly appointed DJ at the Bill Warren Training Centre. Russell put on a sweet show for all the skiers in town last Sunday night. Lasers, strobe lights, fog machines… he went all out.
This past Tuesday we flew the groomer out of the Haig Glacier for the winter. It was the first time the cat had been out since it was flown up in pieces in the 90’s. Needless to say it was high time for a tune up! We had a special Kamov Ka-32 helicopter come in and lift the 10,000lbs beast off the Haig. Unfortunately, I was relegated to man the office at the BWTC, and wasn’t able to go partake in the fun. I was able to get a bunch of pictures from Mick for your viewing pleasure though! 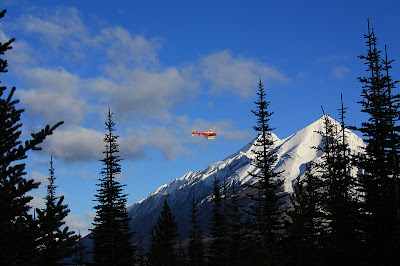 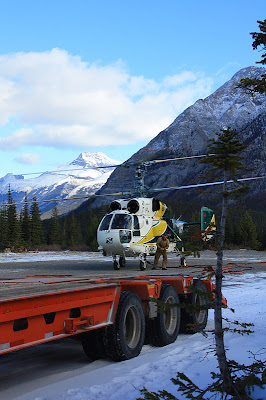 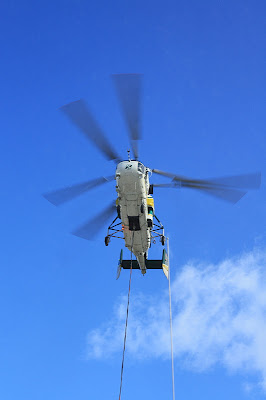 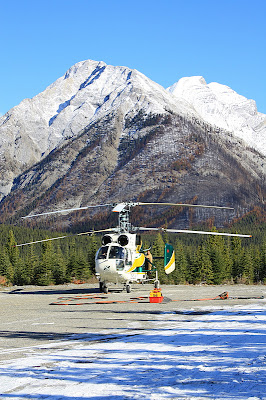 Preparing for lift off. 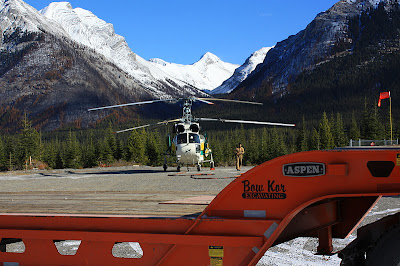 After numerous failed attempts to lift the cat, they had to come back and drop some fuel and extra non-necessity items like the engineer, the passenger seats and the rubber floor mats to try and boost the lift capacity of the helicopter. 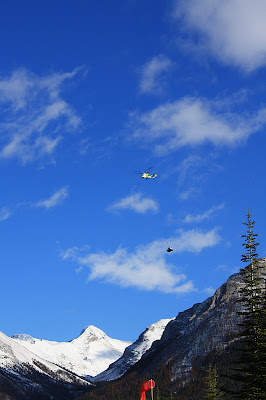 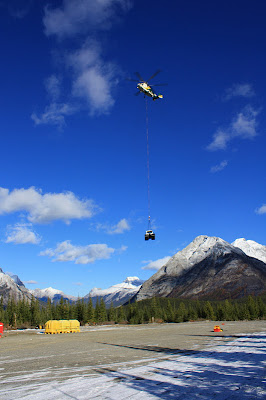 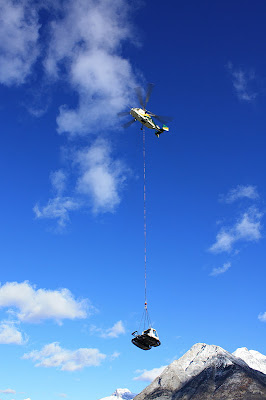 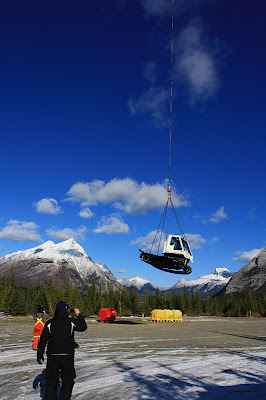 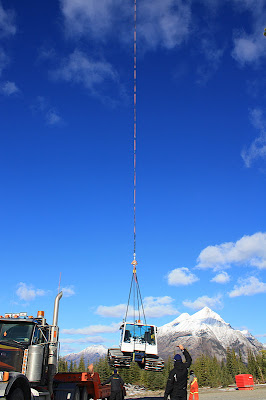 The tricky part, landing the cat on the flat bed. 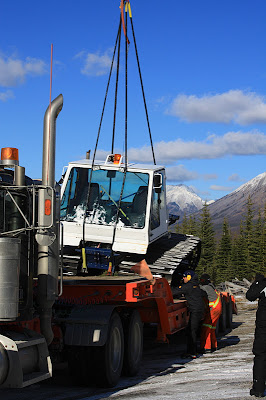 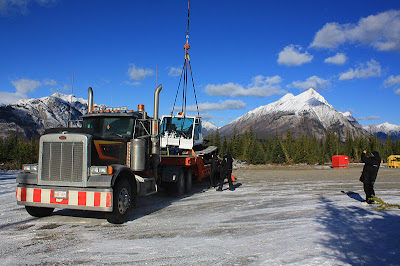 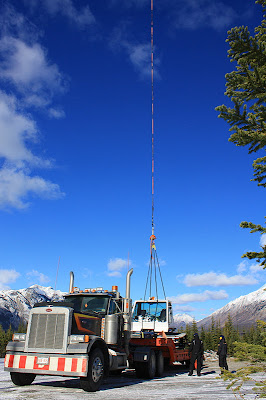 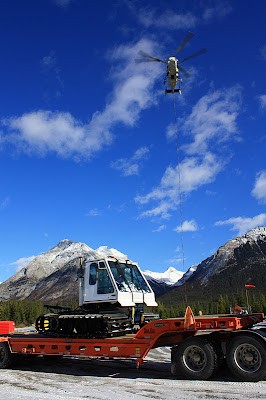 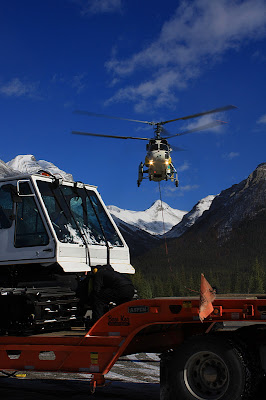 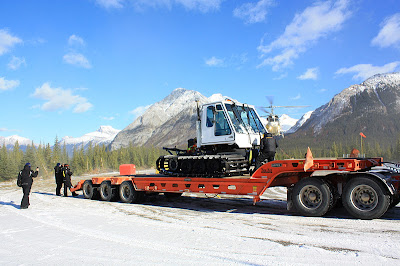 The cat’s hydraulic reservoir was frozen solid so the truck took it to Exshaw where it spent the night in a garage to thaw out. It was driven into Calgary yesterday to begin its overhaul. Next spring we will be flying it back in for another long, frozen decade on the Haig glacier.

The past two nights I have headed into Banff for the Banff Mountain Film Festival. Tuesday night was Radical Reels, there were some great adventure films, unfortunately I couldn’t find any trailers for my favorites (Reel Rock: Ice Revolution, Reel Rock: Race for the Nose and Sketchy Andy) but the trailer below for the Reel Rock Festival shows clips from each. If you have an opportunity to watch any of the films, please do. They will blow you mind!!

Last night was the Snow Show at the Film Rest. It was a full evening of ski movies that left everyone in the audience amped for the season to begin!

Below is the trailer for All. I. Can., definitely one of the best ski movies I have ever seen! If you ever get a chance to watch it, the Trail BC segment with JP Auclair is phenomenal and has an important underlying tone. The whole video is packed with wicked skiing, incredible slow motion and time lapse shots as well as some unique opinions on how our world is changing.

The Freedom Chair, another favorite for the night is a must see. One of the most inspiring ski video’s I have seen for sure.