In the same vein as my previous post following up on Spain’s WC prospects, the FasterSkier series next looked at Lithuania. I’m sometimes curious why some of the former Soviet republics aren’t better represented in cross country skiing. I imagine many of them have struggled economically since the breakup of the USSR and national sports programs wouldn’t be a priority in that case. (I don’t know anything about Lithuania’s economy, for the record. Update: An actual Lithuanian has popped by in the comments to other their own insights.)

But whatever the reason, Lithuania is sort of a prototypical example of the former Soviet republic. For instance, by far the best Lithuanian skier that I can find in their history (post-Soviet era) is (was) Vida Venzene. And she was a rather talented Soviet skier who switched to her native Lithuania once they became independent. So a lot of these new nations inherited some great skiers (Vladimir Smirnov, anyone?) but suddenly cut off economically from Russia some of them haven’t been able rebuild their own program.

The only three Lithuanian skiers that I can find who have recorded top 30 results are Venzene, Ricardas Panavas and Irina Terentjeva. Terentjeva’s Wikipedia page is out of date, as she has had a few top 30 results since the 37th listed there as her best result.

But as with Laura Orgue in my last post, there’s reason for concern when looking at Teretjeva’s results: 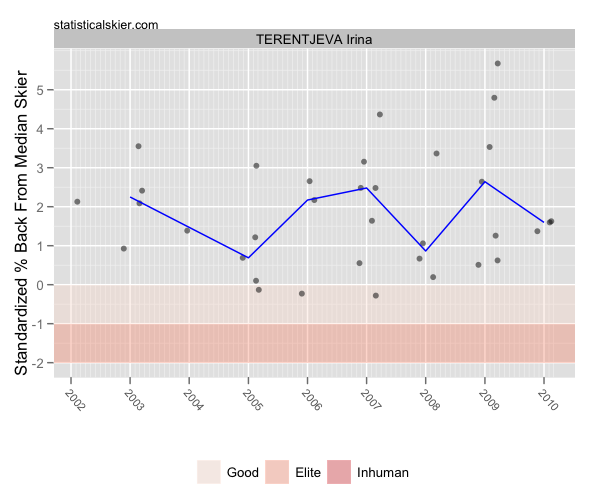 Her median distance result (in blue) has been up and down over the years. But what stands out to me is the steady decline in her best result over the past five years or so. Her sprint results don’t reveal an encouraging trend either: 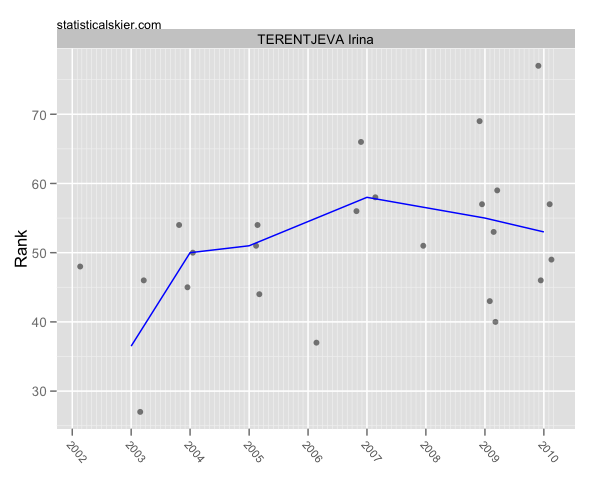