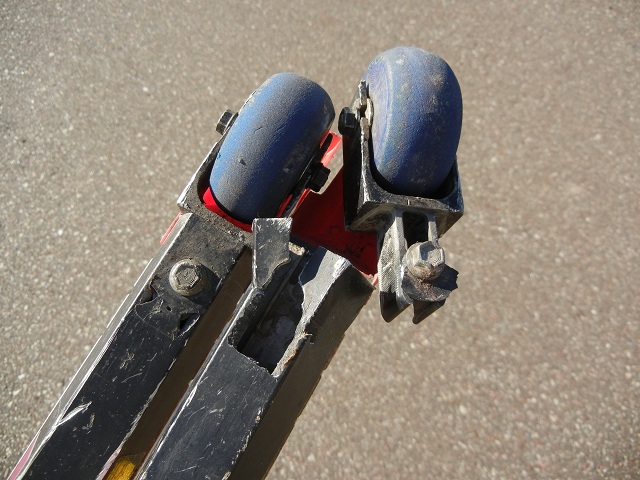 Well…I guess that’s the last time I ski on rollerskis that I didn’t buy at CyclovaXC.  You see that section with the blue wheel and the bolt?  Yeah…that’s supposed to be attached to that big, gaping hole on the rollerski. For the record, these are a pair of Proskis that I probably bought about 15 years ago, and it’s pretty hard to calculate the total number of hours I’ve spent on them, but it’s easily in the 1,000 to 1,500 range, maybe more.
The actual moment of these skis blowing out is kind of an interesting story.  I was doing a 6 AM ski with John (I haven’t gotten the guy’s last name yet).  We were just going casually along on the bike trail, and fortunately we had already turned around and were well on our way back when BOOM!
Apparently the stress caused just from that bolt hole was enough to erode the structural integrity of the ski (after 15 years and 1,500 hours of training).  The fact that I’m a bigger man now than I was in my 1st wave Birkie days probably didn’t help (and the fact that the back wheel gets most of the torque and pressure put on it).  If you look at the above picture, you can see that the other rollerski is about to blow out too.  All those cracks around the bolt shouldn’t be there.
Anyway, I’d just survived a road crossing when there was suddenly a loud grinding sound coupled with the sensation that my foot had fallen into a hole or something.  Amazingly (I’m about to go off about my tremendous skiing skills), I didn’t collapse into a wad, but managed to slow down jumping from ski to ski until I could finally just bail into a ditch.
The thing about skiing is that it’s not like biking.  In biking, when you fall it’s usually onto your side and you’re able to slide gently across the pavement (unless it’s in a race, then you’re flipping forward and breaking your collarbone).  In skiing, you’re going to faceplant and it’s going to tweak your thumbs, wrists and ankles.  I landed softly enough, however, that I wasn’t hurt at all.
It was a little bit shocking, however, to look back at the mangled end of my rollerski and see that the wheel was completely gone.  I was expecting that a twig or something had gotten jammed in it…not that the wheel was gone!  John looked at it and said, “wow…that completely failed!”
Yup, rollerski fail!  Fortunately CyclovaXC stocks tremendous one-way rollerskis and I’m on my way to buy a pair tomorrow!
Oh…if anybody wants to buy some blue Pro-ski wheels with quite a bit of meat left on them, just let me know!  I have four to sell as you can see.