Let’s focus on just three of the men with notable performances on Saturday: 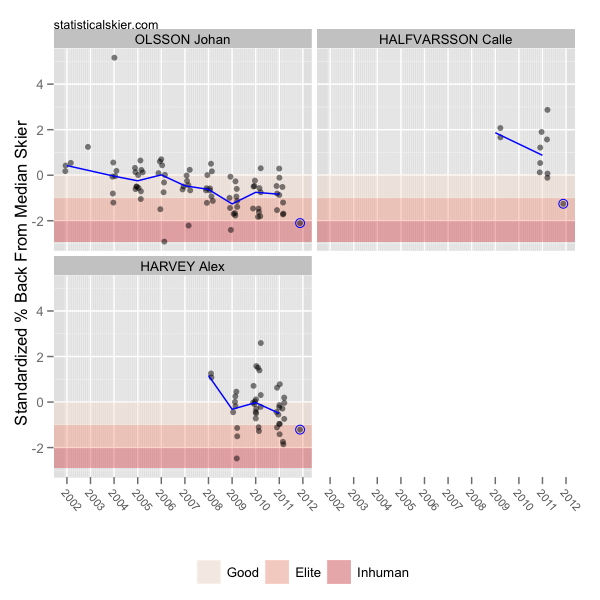 Definitely strong races for each of these guys, but there are some differences. Note that in Johan Olsson’s case, the past three seasons have seen him more or less plateau, and maybe even fall off a bit. He hasn’t laid down an effort quite like that in some time. Given his age and the trend over the past few seasons, I’d guess that we aren’t going to see Olsson pull this rabbit out of his hat each weekend, but you never know.

Calle Halfvarsson, on the other hand, is quite young, only around 22 I believe. For some reason I had it in my head that he was more of a sprinter, but looking back at his results I see now that he’s not quite that lopsided. He has racked up a 1st and 5th place in the WJC sprints, and several top 30 appearances in WC sprints, once as high as 9th. His distance results haven’t looked quite as impressive, but they certainly haven’t been poor. One interesting point to make is that after some strong WJC results, Halfvarsson had some strong results in WC races last season, including the sprints I mentioned. But he didn’t fare well at U23′s last year, finishing 23rd, 25th and 27th. This is a good reminder that you can’t put too much emphasis on a single set of championship level races in evaluating skiers.

All that said, this Saturday’s race was clearly out of the ordinary for him. I’d guess this performance is a good sign for him, but I wouldn’t expect him to do this every weekend this year. Even if this is his best result of the season, and the rest of his races fall between this performance and his median from last year, that would represent an enormous jump.

There was plenty of excitement about Alex Harvey’s 5th place, particularly on this side of the Atlantic. In contrast with Olsson and Halfvarsson, though, this result doesn’t look nearly as extreme for Harvey. If anything, I’d call this a strong race, but not at the outer limits of what he’s shown before. That’s why I’m taking Alex Harvey very seriously this season.

To be honest I’m a little bored by the Norwegian Domination (impressed, but a bit bored) so I’m just going to look at two of the American’s: 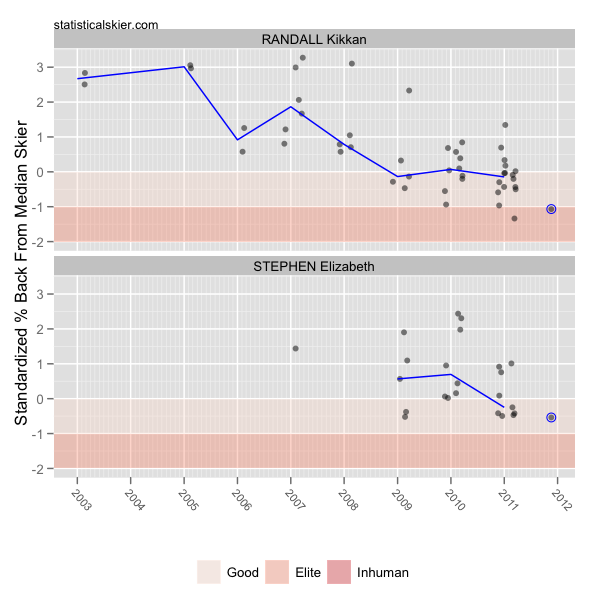 Kikkan showed touches of this kind of performance last season, so it’s exciting to see it come to the surface right off the bat in the season opener. I don’t think she’ll be enough of a threat in distance events to be a serious podium threat in the stage races, but that’s mostly a reflection of how little weight the sprint races get in those events. If the sprint races were actually given equal footing in terms of time penalties, she might be giving some of the Norwegians a run for their money in the stage races with distance performances like these.

Similarly, it’s awesome to Liz Stephen get off to a strong start. Hopefully this will be a confidence builder for her. She essentially matched her career best, but the follow-up question is whether she can improve on it. I want to see her bust through to the Elite range a few times this season.

Over at NordicXplained, they commented that the margin of victory in the men’s race seemed unusually large. Close races are of course expected in mass starts, but they have become fairly routine in interval start races as well. How big was Olsson’s winning margin? Well… 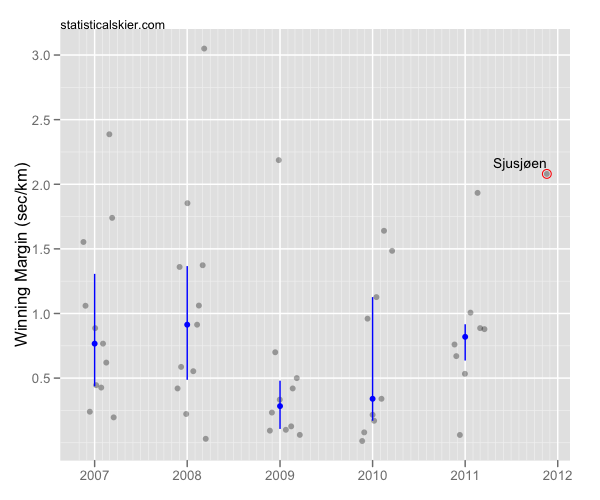 These are the winning margins for men’s interval start races over the past five seasons. I’ve scaled the margins by race distance, for a somewhat fairer comparison. Olsson’a margin is certainly quite large. Not unprecedented, but quite unusual.

Wax Clinic Schedule for CyclovaXC (All Welcome, Free to Attend)