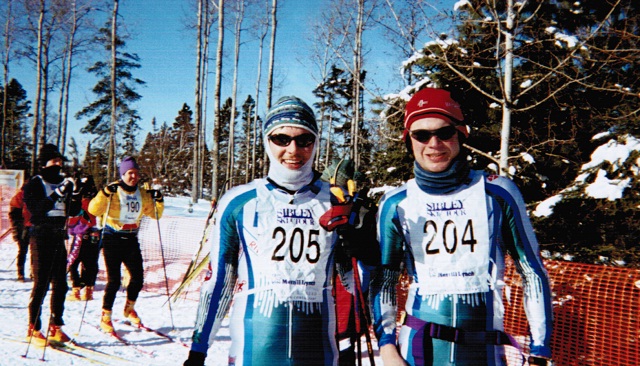 I was just digging through some old photos when I came across this one from the Sibley Ski Tour from about fifteen years ago.  Frank and I are decked out in the original Riverbrook duds that we designed after a rollerski down at Lake Wissota Park.  This suit became known as the “icicle” suit since back then the sublimating companies couldn’t do a fade, so they just dribbled icicles on the fade areas (it was effective enough from a distance).  Oh, that was also a one piece suit which seems to have gone the way of the dinosaur.
You know…the whole one piece versus two piece argument isn’t a slam dunk.  Sure, the two piece is a lot more convenient for things like going to the bathroom before a race.  But it’s like Mike says, when you zip up that one piece suit, you just feel complete.
Anyway, I seem to remember this being a brutally cold race and the fact that we’re both wearing neck warmers seems to attest to that.
Sigh…to be fifteen years younger again, oh well.
But as you can see, Frank and I have been doing this ski thing for a loooooong time!

What's New for 2011 at SkinnySkis.com