After a short break in the Methow and some skiing at Klipchuck (thanks, Scott!), Alison, Mom, Dad and I jumped into a few trucks and headed east for West Yellowstone, MT and the opening Super Tour races. It’s been two years since I was last in West and that time, I wasn’t feeling too hot. This year training has been right on point and I got a good bit of acclimation at Silver Star. We’ve intentionally kept high intensity training to a minimum as a means to continue building until US Nationals in January, so this week’s sprints weren’t likely to be my finest. 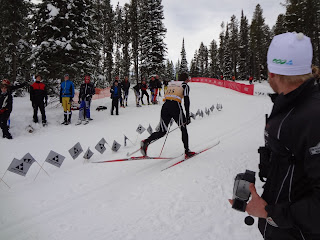 The sprint course was damn tough – 1.6km point-to-point with the finish at a HIGHER elevation than the start. The course started and rolled along nicely for about one kilometer before descending a 150m long hill, wrapping around the bottom then climbing back up. The finish line was the very crest of the now-famous (at least among those who have raced it) Telemark Hill. Hell of a climb, that one. The sprints were a unique format: two qualifiers, the classic beginning at 9am and the skate beginning one hour later.

Scott and Ben (Husaby) did their usual amazing job with waxing and both MOD and Bend Nordic had great glide and better kick for the first qualifier. My new Madshus boards completed the package, and an Ultratune XC02 grind served to out-glide a lot of others out there. I finished the classic race in 17th. It was by no means my best sprint but there’s still a lot of work to do before we reach that point. The skate race was similar in performance with a 15th; much is there but much work is left to be done. And once again, my skis were rockets. Thanks, guys! 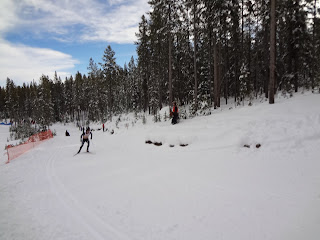