It’s been a long time since I’ve considered myself a distance skier. I’ve put my focus on the sprints and that has continued to be the emphasis of the training Scott has prescribed. But this dryland season we spent most of our training efforts on aerobic endurance, and on Saturday it showed its worth.

Traditionally, the distance course at West is a pretty mellow one with a gradual climb in the middle of the 5km lap. This year they spiced it up, adding a serpentine portion of the new trail Doug’s Doodle, and sending us down and back up Telemark Hill, the one which ended and made painful the sprints on Wednesday. 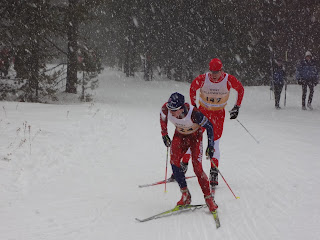 (I got hooked up with a new race suit from Madshus, which apparently offered some confusion to my Mom during the second lap of the race, when she completely missed cheering for me as I climbed the hill)

Because my distance points aren’t too hot I started in the seed after the A group. The good part of that situation was that I started just as those guys were lapping through. I managed to accelerate and catch a ride on Canadian Pate Neumann for his final two laps. I felt GREAT. Well, it helped that the skis were awesome. But I also felt great. Technique, energy, everything was there. I ended in 15th place, 45sec out of 7th. It’s nice to know that with the right training I can start to hold my own in both distance and sprint racing. It’s going to be a good year.

I’m in West for another few days before heading to Bozeman for more Super Tour action.

West Yellowstone: A Summary (part I)